Recording guitar can be simple or complex depending on the hardware and software you use. If you’ve never recorded guitar before, it can seem intimidating.

In this guide, I’ll answer some common questions you might have about recording guitar. If you have a question not covered here, use the form at the bottom of the page to send in your question and I’ll answer it.

Here are some useful recording guides to check out:

The above guides will answer a lot of questions that may not be covered below. Check them out after you read through the below questions.

Should You Record Guitar in Mono or Stereo?

Choosing whether to record your guitar in mono or stereo is important to understand because it can have a big impact on your choices later on.

Let’s have a closer look at electric vs acoustic guitars and the different setups you can use to understand why you don’t need to record in stereo.

There are two basic ways of recording electric guitar: direct or miking a guitar amp.

You can easily split your mono guitar recording into stereo when you pass it through stereo effects such as delay, so don’t feel that you’ll be limited with a mono recording. When you record direct, mono is perfectly fine.

If you want to record your guitar amp with a microphone, you’ll still record in mono. If you place a microphone in front of your amp, record it as mono.

If you want to use multiple microphones to record your guitar amp (eg: one up close and one further away from the speaker), you’re still better off recording mono. Record in mono but send the two microphones to two separate tracks in your DAW.

When you do this, you have plenty of flexibility in how you process each recording.

The best practice when recording a guitar amp is to use multiple microphones and record each one in a separate channel.

Some guitarists believe you should record acoustic guitar in stereo. The idea is that you record with two microphones and blend the two together into a stereo recording.

That works perfectly fine, but you’ll still be better off sending each microphone to a separate channel in your DAW and record each one in mono.

If you have three or four microphones, you’ll have the most flexibility to mix between the different tones when you record all of them into separate tracks in mono.

For example, you could have one microphone close to the soundhole, another one near your fretboard, another one a few feet away from you, and another one on the other side of the room.

When you record all four microphones in mono into separate tracks, you can then mix between them as you like, pan each microphone to different positions, or apply EQ or effects to any one as you like.

If you were to record all four microphones in one stereo track, you’ll be limited in what you can do with that recording.

Should You Record Guitar and Vocals Separately?

If you want to record your guitar and your vocals for a song, the way you record can change your performance as well as the overall quality of each individual track.

If you’re looking at getting the best quality recordings possible, then recording guitar and vocals separately is the best option.

Keeping both tracks crystal clear and separate will help you EQ and mix the tracks and produce a better sounding recording.

Some guitarists feel the most comfortable recording guitar and vocals at the same time. If that sounds like you, then you can definitely record both at the same time. As long as you use good equipment and try to set up your microphones to minimize bleeding, you’ll likely be happy with your recordings.

What many musicians do is record both vocals and guitar at the same time. Then, they overdub vocals and guitar separately using the first recording as a reference. The new vocals won’t have any guitar bleeding through in the background, so it will likely sound better. If you don’t like the idea of recording guitar and vocals separately, try this method and see how it feels. You might be happier with the results you get.

Should You Record Guitar Direct?

You have two options when recording guitar: you can record direct or record through a microphone. The right option for you depends on your equipment and how you like to edit your recordings.

Recording direct is when you plug your guitar into an audio interface instead of a guitar amp. You will end up with a dry and clean signal, then can add amp sims or effects later.

If you want to be able to easily tweak and change your guitar tone after you record it, you should record direct. If you love the sound of your guitar amp, you might want to record direct and through a microphone at the same time.

Even if you want to record your guitar amp with a microphone, I suggest also recording direct at the same time so you can have the best of both worlds. Having a direct recording is always handy to have.

Here’s a basic example of why most guitarists should record direct. Let’s say you dial in the perfect guitar amp tone and you record your parts. It sounds great and you’re happy with your performance. After the rest of your band records their parts and you listen to the overall mix, you realize that the gain in your recording is slightly too high and makes your guitar sound a bit muddy. You try to adjust EQ, but it’s no good – the amp gain was too high and there’s no way to lower it without re-recording all of your parts.

If you’ve never used guitar plugins before, check out my guide on the Best Guitar VST Plugins here. You might be surprised by how good modern guitar amp plugins sound.

The point to remember is that recording direct gives you complete flexibility. You could even feed your direct recording to a real guitar amp and record that amp with a microphone.

Should You Record Guitar or Drums First?

If you want to record a song with a band, you might wonder whether you should record guitar or drums first. The order you record your parts can have an impact on your performance, so it’s worth thinking about.

The best practice is to record drums first so the other instruments can follow the drummer’s tempo. If the guitarist feels confident recording to a click track, you can record guitar first. But most musicians will feel more comfortable recording to a drum track.

The main point to keep in mind when deciding if you should record drums or guitar first is to think about which way will give you a better performance. If you feel uncomfortable recording your guitar tracks to nothing but a click track, then don’t do it. Record drums first.

Likewise, if you feel more comfortable recording to a click track, record your guitar tracks to a click track. Do whatever helps you capture the best performance possible.

Usually, a drummer will record along with a click track, so even if you record guitar first, the drummer should have no problems recording their parts and keeping in sync.

While the best practice is to record drums first, do whatever feels the most comfortable for you and your band.

What dB Should You Record Guitar At?

The level you record your guitar at can make or break your recordings. In your DAW, you’ll see an audio meter displaying the current level in dB (decibel).

Clipping is when the signal is so strong that it maxes out. In your DAW, you’ll likely see a red indicator to let you know that clipping has occurred as shown in the below screenshot.

If you ever see this indicator appear during or after recording, it means the signal is too strong and you should turn your level down slightly. Aim to record guitar so you never encounter clipping.

A good quality audio interface provides plenty of headroom, which means you can safely turn it down without it introducing noise into your recordings. You don’t want to record your guitar at too low a level, but you will likely have plenty of headroom to play with.

Why Does My Guitar Recording Sound Bad?

Your guitar recording can sound bad due to many different reasons. The more you learn about recording best practices, you’ll be able to avoid the most common mistakes.

Here are some reasons why your guitar recording might sound bad:

As you can see, there are a lot of possible issues that can cause your guitar recording to sound bad. Go through the above list to try and identify what the cause is, then you can work out what to do about it.

For example, let’s say somebody is recording electric guitar and it sounds muffled. When you have a look at their setup, you see that they’re using an adapter to plug their guitar into their computer’s microphone jack. That will guarantee a poor quality recording as explained in this guide. Using a good quality audio interface will solve the problem.

As another example, maybe your recording has crackling or static sounds. This may be caused by having the audio level too high (clipping), or an issue with the audio driver.

Whenever you have a bad sounding recording, try to identify in what way it sounds bad. Try changing audio drivers, adjust your settings on your audio interface and try different plugins to narrow down the problem.

Can You Record More Than One Instrument At Once?

Some audio interfaces have multiple input channels so you can record more than one instrument at the same time.

For example, you can see that the below audio interface has two separate input channels where you can plug in an instrument cable or a microphone cable.

If your audio interface has more than one input channel, you can send all of these channels separately to your DAW.

Check out this guide on the Best Audio Interfaces for Guitar to see different options worth considering.

To set up the channels, open the DAW and in the audio settings area, enable/disable the various inputs you want to use.

Then you can set up a track for each input channel you want to record and assign each one individually to a track. You don’t need to do anything on the audio interface to control this apart from setting the initial gain level.

Every DAW is different, but there will be an area on each track where you can select the input source. 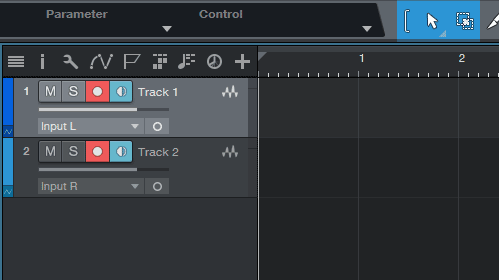 When you arm both tracks for recording and hit record, you’ll see the two tracks record each channel.

Some audio interfaces have a lot of inputs and you can easily record as many of them as you like if you set up a track from each one and assign the correct channel.

This can be handy for drummers as you may be able to record 6+ microphones at the same time to capture different parts of the kit in separate recordings.

A lot of other questions you might have may be answered in the guides on recording listed at the bottom of this page. Check those guides out then fill out the below form if you still have a question.

Here are some other useful guides on recording guitar that may help you out:

Stay up to date on new guides, tutorials, reviews, and lessons by subscribing to my email newsletter here.