Open C is an incredibly popular open tuning for guitarists. If you’re thinking about playing around with an open tuning, read through this guide to learn about Open C Tuning.

In this guide, you will learn

I also recommend having a play around with Open G Tuning. Open G works incredibly well with a guitar slide and is as popular as Open C tuning. Check out my Guide to Open G Tuning here to learn more.

How to Tune Your Guitar in Open C Tuning

There are a few different variations for open C tuning, but let’s focus on the most popular version.

To tune your guitar into Open C, you need to change your strings to C G C G C E.

Depending on your strings, you may find that the low E string (now a C) becomes a bit slack to play. This is because the lower tuning reduces string tension.

If you enjoy playing in Open C tuning and want to keep your guitar in this tuning, you may want to change your string gauge on the strings you tune down.

As you might expect from an open tuning, there are some super-easy chord shapes to learn in Open C tuning. Let’s go through some main chord shapes you can use in Open C Tuning. Many of the chord shapes shown are moveable, so you can play them all over the fretboard.

If you don’t know how to read the below chord diagrams, check out this guide. The guide explains with diagrams on how to read chord charts.

The Major chord shape in Open C tuning is as easy as it can get. Strum all open strings for an open C chord. To play any other Major chord, simply barre your finger across the fret and line up the sixth string note with the root of the chord you want to play.

As you can see from the above chord diagrams, the note on the sixth string tells you what the chord is. For example, if you want to play a G Major chord, flatten your first finger across the seventh fret (the seventh fret on the C string is G).

Here are two minor chord shapes you can move up and down the fretboard. If you find the first chord shape hard to play due to the stretch with your fourth finger, try the second chord shape.

If you play the second chord shape, the lowest note in the chord shape lines up to the root note (eg: the second fret on the fifth string is A, so you get the chord A minor as shown above).

Once you memorize the notes on the fretboard while in Open C Tuning, you’ll find it easy to move these shapes into any position you want.

Here are some other useful open chord shapes in Open C tuning. Many of these shapes are moveable, so you can move them up the fretboard to play any other chord you want. 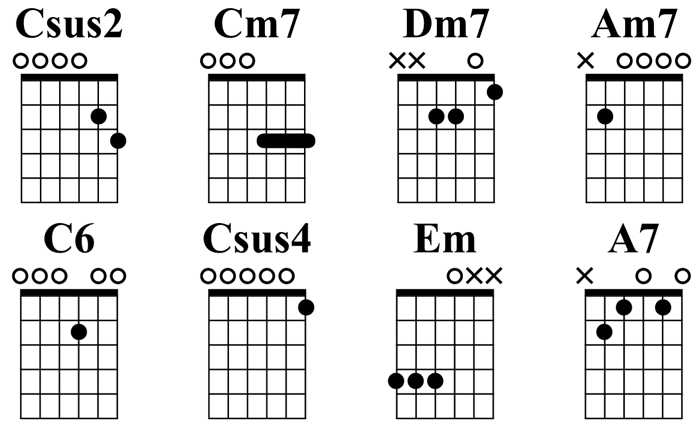 Here is a printable PDF with all of the above chord shapes in Open C Tuning.

If you enjoy Open C Tuning, it’s worth spending the time to memorize the notes on the fretboard. Memorizing the notes will help you quickly find chord positions and come up with riffs and licks.

Here are the notes of the fretboard in Open C Tuning:

Many songs in Open C Tuning are written in the key of C, so it’s worth taking the time to memorize the above notes.

If you want to mix things up, the below fretboard diagram shows the C minor scale in Open C Tuning:

This scale works great if you want to play with a completely different feel compared to the C Major scale. You can come up with some darker sounds or mix between the two scales for a bluesy approach.

Open C tuning is a popular alternate tuning and there are plenty of songs to play to see what all the fuss is about.

Some guitarists like the tuning so much they use it as their main tuning. Check out the below songs and Guitar TAB for some examples of what you can do in Open C Tuning.

John Butler plays a 12 string guitar and many of the Trio’s songs use Open C tuning.

Ocean is a great example of the freedom an open tuning can give you. There are multiple versions of this song as it is played differently each time.

The below TAB of a part of Ocean is played on a 12 string guitar in Open C tuning, but you can play it on a 6 string guitar without any problems. Use a capo on the 4th fret as shown above.

Check out this Guide on 12-string Guitar Songs to learn more about this song and hear the full version. There is a video that shows how to play the right hand tapped notes (notated in ‘T’).

Other John Butler Trio songs in Open C Tuning worth checking out include Betterman, What You Want, and Funky Tonight. There are plenty of other songs in Open C, but these are a good starting point to get an idea for John’s style of playing while in open tunings.

Burden in My Hand by Soundgarden

Chris Cornell was well-known for using a lot of alternate tunings. The song Burden in My Hand uses a variation of Open C tuning.

To play this song, you need to change one string from the normal Open C tuning. Lower the second string from C down to G.

With this tuning, the second and third strings are the exact same pitch. You may find the second string becomes quite loose due to the super-low tuning.

If you enjoy playing in this tuning, you might want to swap that string for a heavier gauge string to increase the tension.

Here is the main opening chord progression in Guitar TAB:

Also check out the songs A Thousand Days Before and Pretty Noose for two more Soundgarden songs that use this variation of Open C tuning.

Friends is a great example of how an open tuning can change the way you think about guitar.

The below Guitar TAB shows a great part with some ascending octaves with some droning open strings. It’s a great demonstration of how open tunings feel and sound so different.

Another song to check out is Bron-Y-Aur (not to be confused with Bron-Y-Aur Stomp, which is similar in style but uses a different tuning), which uses a variation on Open C Tuning called Open C6 Tuning.

To play in Open C6 Tuning, you start in Open C, then tune the fifth string back up to A. So you end up with: C A C G C E.

If you enjoy fingerstyle, it’s a great song to play and sounds amazing in the Open C6 tuning.

King of Spain by The Tallest Man on Earth

King of Spain is a good example of how Open C tuning can turn a simple strumming song into something more interesting.

This song is played in Open C tuning with a capo on the 8th fret.

The capo helps create a tight rhythm. Try playing this part without a capo and you’ll hear the difference.

For another Open C song by The Tallest Man on Earth, check out Wind and Walls.

There are plenty of examples of Open Tuning used in acoustic strumming songs (like the above), but Open C can be a great tuning for heavier styles of music.

Deadhead is a great example of Open C used in a heavy and melodic electric guitar song.

Devin Townsend uses Open C as his main tuning. So if you’re looking for inspiration and new ideas when using an open tuning, check out his music.

Here are more songs in Open C Tuning worth checking out in addition to the above songs:

Find out about other alternate tunings in my Ultimate Guide to Alternate Tunings. It covers other open tunings as well as some weird tunings that are a lot of fun to play with. The guide also includes a handy reference PDF with a wide range of alternate tunings.

What is Ear Training? Everything You Need to Know
Top Muse Riffs Lesson with Guitar TAB
Guitar Effects Used On All Along The Watchtower by Jimi Hendrix
14 Must-Know Easy Guitar Riffs For Beginners (with TAB)
Easy Fingerpicking Guitar Songs for Beginners (with TAB)
True Temperament Frets Explained Simple (Squiggly Frets)