A 12-string guitar can completely transform a song. Most of the songs on this list wouldn’t be as popular if it weren’t for the shimmer and full sound of a 12-string guitar.

Before you give these songs a go, read through this guide on How to Tune a 12-String Guitar.

12-string guitars stand out the most when arpeggiating chords. Instead of hearing single notes as you would with a normal 6-string guitar, you hear something very different.

The intro to Wanted Dead or Alive is a great example of how a 12-string guitar can add something unique to a song.

The chords during the rest of the song have a distinctive 12-string shimmer, but it’s the intro that really shines in this song.

Here is the Guitar TAB for the intro. If you’re new to Guitar TAB, read this guide on How to Read Guitar TAB to know what all the symbols and numbers mean. 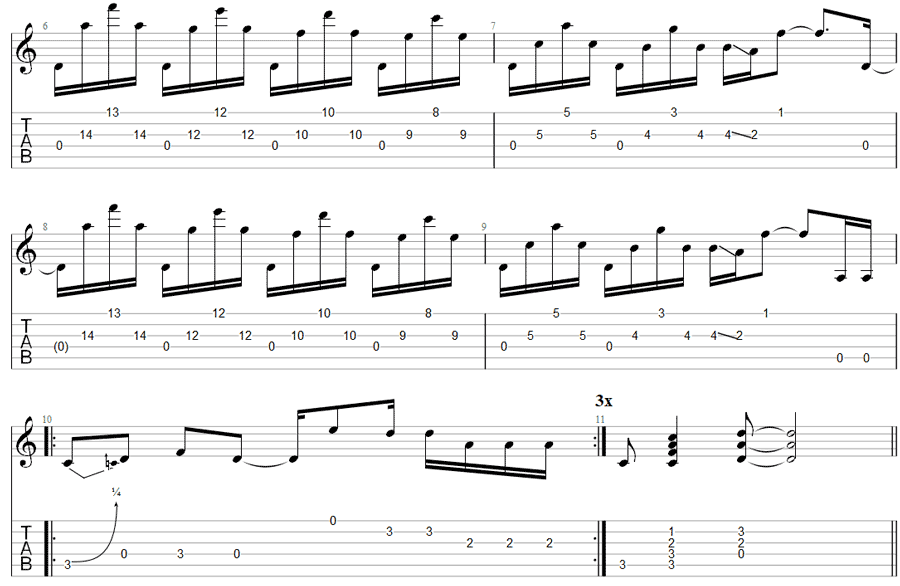 Hold your fingers down when playing the third and first strings to let the notes ring out. Practice sliding between the positions and think about which fingers are best to play these notes.

For the simple riff in bar 10, try to put some attitude into that 1/4 bend.

Wish You Were Here – Pink Floyd

This song wouldn’t be the same if it wasn’t for the 12-string you hear from the very beginning.

This is a simple part to learn and the slow tempo gives you plenty of space to think about each note.

Here is the Guitar TAB for the first few bars of the intro before the lead guitar comes in: 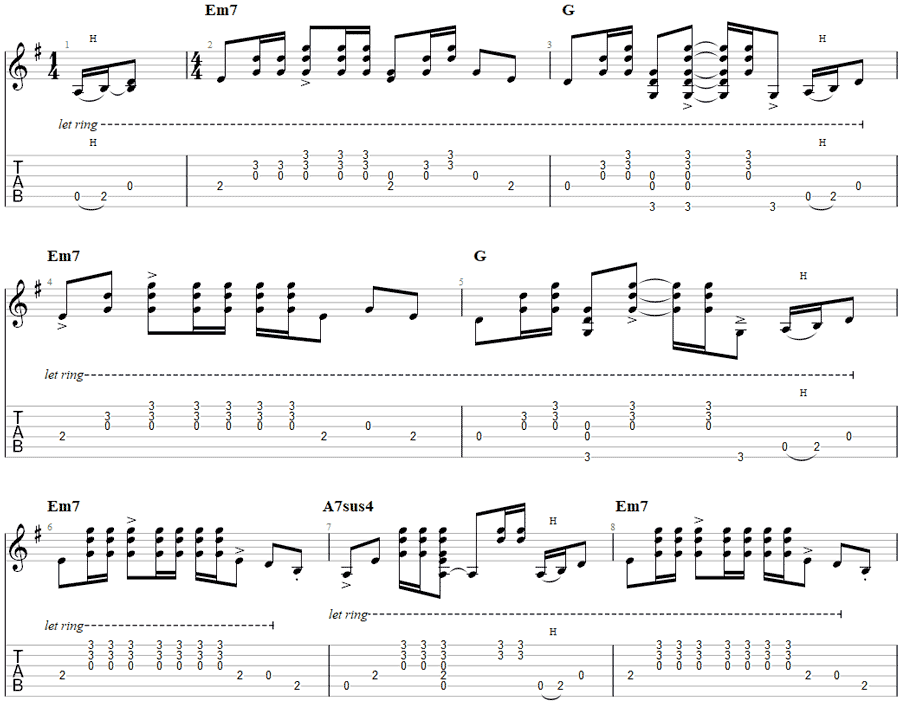 Pay attention to the chord names above the staff to give you an idea of what position your hand should be in.

If you’re looking for something a bit different than the rest of the songs in this list, give Ocean a try.

This song uses a lot of hammer-ons, pull-offs, and tapping. If you feel adventurous, you can try adding percussive sounds by tapping your guitar’s body as shown in the below video:

If the hammer-ons and pull-offs are too fast for you, start by playing the song slowly and gradually build up the tempo as you develop your confidence.

There are many different versions of this song as it is largely improvised, so if you like the ideas in the above video, search for other live versions and you’ll hear similar variations on the main themes.

Here is the Guitar TAB for a short section that starts at 1:00 in the above video. This is possibly the simplest part of the song but is interesting to play thanks to the tapped notes.

As you will see in the above video, the lower notes are played by tapping with the picking hand. This frees your fretting hand to continue to play the higher notes.

Practice the hammer-ons and pull-offs and try to keep the notes ringing out without having to re-pick them. If you hit the string hard enough on the first hammer-on, it makes it easier to keep the string vibrating.

Once you get the basic idea of this part, try to come up with your own variations and try to improvise around it.

More Than a Feeling – Boston

If the last song was a bit overwhelming, this song is a good change of pace.

The simple picking pattern and chords make this a great 12-string song to learn for beginners and up.

This is another example of how arpeggiating chords sounds great on a 12-string guitar.

The electric guitar riffs are also great, but as soon as the 12-string guitar comes it, it adds something interesting to the song that would separate it from a typical song.

The below Guitar TAB is for the arpeggiated chords during the intro.

Think about the best finger positions for these arpeggiated chords and hold them in place to let the notes ring out. Aim for smooth transitions between the bass notes in the second bar.

If you’ve only played this song on a 6-string guitar, you may find it feels and sounds completely different when you try it on a 12-string guitar.

Here is the Guitar TAB for the first few bars:

The very first chord shape will require firm pressure from your first finger to avoid buzzing notes. If you’re not used to playing barre chords, this may take some time to play cleanly.

Make sure you hold all of the notes down so the chords continue to ring out as you pick other strings. Try playing this part with fingerpicking, then try to play it with hybrid picking (pick and fingers).

Another great Led Zeppelin 12-string guitar song to check out is Over the Hills and Far Away.

Ticket to Ride – The Beatles

Even if you don’t want to learn how to play this song, I highly recommend you watch the below music video for a great example of “I really don’t want to be here” by the entire band.

The drumming technique alone at 1:37 makes this video worth watching.

While the 12-string guitars used in this song (2x Rickenbackers were used) doesn’t stand out as much as other songs in this list, it still adds to the overall vibe of the song.

Here is the Guitar TAB for the 12-string intro:

For more Beatles songs using a 12-string guitar, check out:

There are plenty of Beatles songs featuring 12-string guitars in different parts. Some songs feature them throughout the entire song while others only layer them in in certain parts.

While most of the other songs in this list focus on arpeggiated chords and riffs, this one is purely strumming chords.

This song will give you plenty of practice at applying firm pressure onto the strings.

The chords are the same throughout the entire song, so this is the easiest song in this list from a chords point of view.

Here are the chords for the song:

If you want to practice similar strumming based songs, check out this Guide on Easy Chord Strumming Songs. It includes chord diagrams and strumming patterns. It’s a great way to develop your strumming abilities.

Hotel California is another iconic song that gets it’s easily identifiable sound thanks to a 12-string guitar at the very beginning of the song.

The 12-string guitar is played on and off throughout the song in some of the verses and the intro.

If you don’t have a capo, check out this guide for different capos suitable for a 12-string guitar.

If you are good with barre chords, you could play this part as barre chords, but it will require firm pressure to make sure the notes ring out.

Here are the first 8 bars of the 12-string guitar part. Remember that this is played with a capo on the 7th fret: 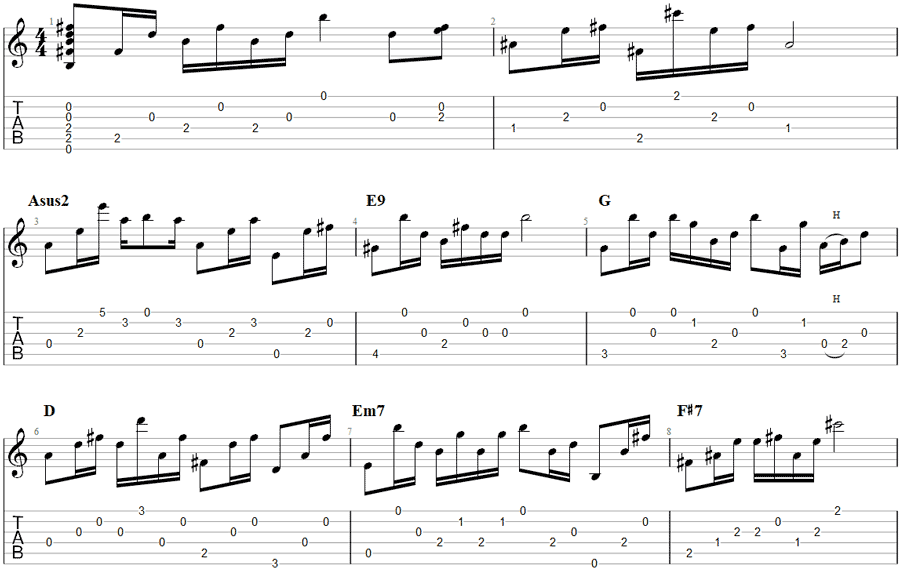 All of the notes in these chords should ring throughout, so keep your hand in the chord positions as needed.

For something very different and a lot heavier than the rest of the songs on this list, check out this Pantera song.

The 12-string guitar by Dimebag comes in after a long synthy intro.

This song is in Drop-D, which gives the 12-string guitar a heavier quality than what you hear on other songs on this list.

Here is the intro part in Guitar TAB:

Here is the verse, which combines some interesting chord shapes with a variation of the above riff:

While this song sounds great on a 6-string guitar, something about the 12-string guitar gives this simple song a menacing quality.

There are plenty of other songs not listed above that make use of a 12-string guitar. If you listen to enough of these songs, you’ll start to recognize the 12-string as soon as it appears in a song.

Here is a Guitar TAB book with 25 songs for 12-string guitar from a range of different artists. If you’re looking for some 12-string songs not covered above, check out the list of songs in this book.

Spend some time learning the parts in the above songs to get an idea of what makes a 12-string guitar unique and how to make it shine.