If you are just starting out learning guitar, you probably want to learn some songs. Guitar is hard to learn in the beginning, so you might wonder how long it will take to learn songs.

How long it takes to learn a song on guitar depends on your skill level and the complexity of a song. An easy song may take a beginner anywhere from a few days to a few weeks to learn to play on the guitar.

Intermediate and advanced guitarists can learn simple songs within days and complicated songs can take anywhere from weeks to months to learn.

To help you learn songs faster and get a better idea of how long it takes to learn a song on guitar, this guide will go through some examples from some of my students.

At the end of this guide, I’ll share some useful tips on how to learn songs faster on guitar.

If you are thinking about learning guitar, check out this guide for answers to common questions you might have.

A beginner can learn a simple strumming song on guitar within a week and more complicated songs can take months to learn.

The reason it takes longer for a beginner to learn a song on guitar is that you need to learn any new techniques used in the song on top of learning the parts in the song.

For example, if you’re a beginner and you don’t know how to play a bend (the below Guitar TAB shows an example of a bend), if the song you are learning uses a bend, you need to stop and learn how to play a bend before you can continue to learn the song.

If you already know all of the techniques used in a song, it will take you less time to learn it because you won’t need to stop and learn new techniques.

The more techniques you learn on guitar, the faster you will be able to learn songs.

Later in this guide, I will give you a step-by-step guide on how to learn songs faster on guitar.

How Long it Takes to Memorize a Song on Guitar

So how long does it take to memorize a song on guitar?

It will take most guitarists at least two weeks of regular practice to memorize a song. Simple songs can be memorized faster and complicated songs can take longer to memorize.

The reason it takes a long time to memorize a song on guitar is that memorization requires a lot of repetition.

Once you learn to play a song, your memory will gradually weaken as shown in the below chart: 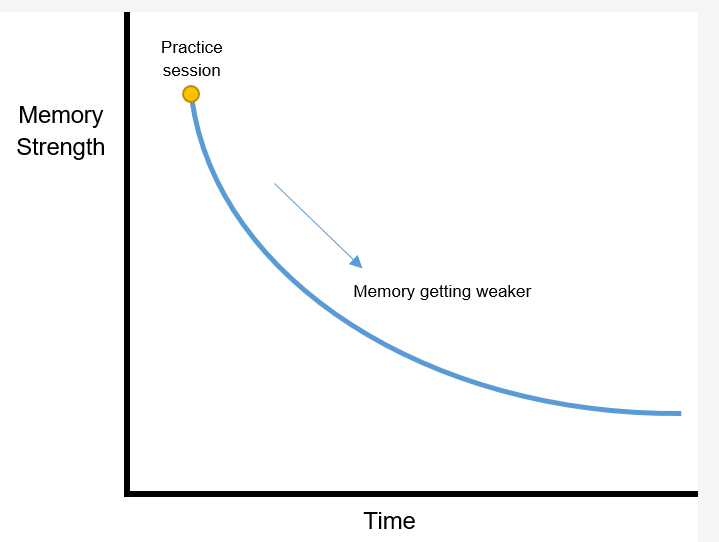 This curve is why sometimes you might have trouble playing something that you could easily play a week ago.

Over time, our memory of guitar songs, exercises, or techniques fade away.

The only way to stop your skills from fading away from memory is to continue to practice them.

Even if you can play a song perfectly on guitar today, unless you continue to practice it, you won’t be able to memorize it.

Find out more about memorizing songs or techniques faster in this guide.

There is a big difference in how long it takes different people to learn a song on guitar.

To get a better idea of how long it might take you to learn a song, let’s go through some real examples from some of my guitar students.

The easiest type of song you can learn on guitar in the shortest amount of time is a simple strumming song.

The strumming songs in this lesson are perfect examples of songs you can learn in a very short time.

One of my beginner students wanted to learn the first song in that lesson, Riptide by Vance Joy.

She only knew how to play a couple of basic open chords and had never learned a full song before.

This song only uses four chords as shown below:

It didn’t take her long to learn these four chords as she already knew how to play Am and C.

We spent some time learning and memorizing the chord shapes, then practiced changing back and forth between the chords.

It took her about a week of practice to feel confident with the chords.

Once she felt comfortable with the chord shapes, we started working on the two strumming patterns used in the song.

It took her one week to memorize the two strumming patterns used in the song.

Once she learned the chords used and the strumming patterns, that was all she needed to play the entire song.

Key point: it takes a beginner anywhere from 1-4 weeks to learn to play a simple chord-based song on guitar.

Learn some easy strumming songs with chord diagrams and strumming patterns in this lesson.

In the first lesson, we worked through some of the easy fingerpicking patterns covered in this lesson and worked on his technique.

He spent the next week at home practicing the different fingerpicking patterns.

He had a classical guitar (find out about the types of guitars in this guide) and wanted to learn something Spanish sounding.

An easy fingerpicking song to learn with a Spanish vibe is Malagueña, so we worked on that song in the second lesson.

Here’s the Guitar TAB he learned for Malagueña:

After he felt confident with the basic fingerpicking patterns from the first lesson, we gradually worked through learning the above part.

It took him about a week to be able to play the part from start to finish, then another couple of weeks to memorize it and build up his speed.

He was able to learn the full song on guitar in about 4 weeks.

As you learn more as a guitarist, you will learn songs faster.

A good example is with one of my students who wanted to learn the song For the Love of God by Steve Vai (find out about Steve Vai in this ultimate guide on his gear, effects, and tone).

If you have heard this song, you know that it is filled with complicated licks, scale runs, and techniques.

To learn this song, we first broke it down into sections.

Over the next month, we gradually worked through the song one bar at a time.

Some sections would take weeks’ worth of practice to learn, while other parts my student would learn within a day.

There is a fast and complicated section towards the end of the song that took about a month for my student to memorize.

Overall, it took him around 3 months to learn the song, then another 4-6 months to play it from memory.

It has been around 9 months now since he started learning the song and he has almost mastered it. If he continues to practice, he will continue to get better at the song, but it’s fair to say he knows how to play it really well now.

Key point: while you can expect to learn songs quicker as you become more accomplished with your guitar playing, hard songs will still take a lot of time and practice to learn.

If this sounds like a long time to learn a song on guitar, don’t be discouraged. Being able to learn a song from scratch and master it is a great accomplishment and feels fantastic once you can play the songs you love.

How to Learn Songs Faster on Guitar

If you follow the above tips, you will learn songs faster on guitar and you’ll develop better technique.

Songs To Learn Quick on Guitar

If you would like to learn some quick and easy songs on guitar, I have written a few lessons to help you out.

Easy Chord Strumming Songs – this lesson will teach you the chords and strumming patterns used in some incredibly easy chord-based songs.

Even if you’re completely new to guitar, you’ll be able to learn the strumming songs in the above lesson within a matter of weeks.

Easy Fingerpicking Songs – once you learn some basic fingerpicking patterns, you’ll find it easy to learn the songs in this lesson.

Easy Guitar Riffs – learning these guitar riffs will give you a great head-start in learning a lot of fun songs on guitar. Many of the songs in this lesson repeat these riffs over and over, so they’re a great starting point for learning easy songs on guitar.