The C Major Scale is the first scale you should learn on the guitar. It’s the starting point for all other scales and the easiest to learn. Once you learn how to find the notes of the C Major scale on your fretboard, you can easily learn scales like the G Major or F Major scale by simply changing one note.

This guide covers everything you might want to know about the C Major scale including common open chords, note positions on a fretboard diagram, and more.

This means you can use all the diagrams, exercises and chords covered in this guide for both the C Major scale and the A minor scale.

Notes in the C Major Scale

The C Major scale is the easiest scale to remember because it doesn’t have any sharps or flats. The notes are: C D E F G A B

The main reason why the C Major scale is usually the first scale to learn is that it has no sharps or flats. It makes it easier to read on sheet music and easier to find the notes on the guitar.

If you’re ever at a piano and want to noodle around, you can play the C Major scale if you only play the white keys. On a piano, the black keys are the sharps and flats.

Here are the notes of the C Major scale across the entire fretboard:

Pay extra attention to all the ‘C’ positions as C is the root note of the scale. If you don’t know how to use the above diagram, keep reading as we will look at some basic exercises to get you playing the C Major scale.

The C Major scale is the most important scale to learn so it’s worth spending the time to memorize the above notes.

To memorize the above notes, read through this guide on memorizing the fretboard. The guide will show you how to break the fretboard down into easy parts to memorize.

The below Guitar TAB and standard notation show four examples of the C Major scale:

Try playing the four examples to get a feel for how C Major sounds and where the correct notes are on the fretboard.

Then use the fretboard diagram and try finding different scale positions. Play the scale runs up and down as an exercise to get you used to the positions.

There are certain chords that work with the C Major scale. This is handy to know if you want to write a song or jam in the ‘key of C’.

In music theory, we can ‘harmonize’ the scale to figure out what those chords are. To make things easy for you, here are the seven main chords of the C Major scale: 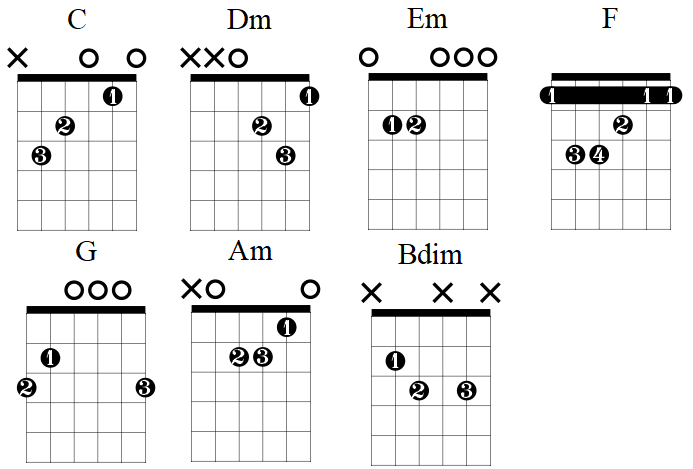 Note: remember that the A minor scale uses the exact same notes as the C Major scale. This means the above chords also fit in the key of A minor.

Also keep in mind that while a song might be based on a scale, it doesn’t mean the song will perfectly stick to a scale the whole way through.