This guide covers everything you might want to know about the F Major scale including common open chords, note positions on a fretboard diagram, and more.

This means you can use all the diagrams, exercises and chords covered in this guide for both the F Major scale and the D minor scale.

The D minor scale is an incredibly popular scale for guitarists when tuned to Drop-D.

Drop-D combined with the D minor scale is the perfect combination for rock, metal, and similar styles.

Learn about Drop D Tuning in this guide.

The good news is that once you memorize the F Major (D minor) scale in standard tuning, it is easy to play it in Drop D tuning.

All you need to do is remember that the low E string is now a D string (same note positions as the fourth string) and everything else stays the same.

Notes in the F Major Scale

The F Major scale is easy to remember because it only contains one flat note. The notes in the F Major Scale are: F G A Bb C D E

Note: the little ‘b’ represents a flat symbol.

This is what the key signature for F Major looks like:

Even if you don’t know how to read music, if you see a key signature with only one flat symbol, it means the music is in F Major (or D minor).

This is why the F Major scale is so easy to learn after you learn the C Major scale. All you need to do to change from C Major to F Major is remember to lower the note B by one fret to get B flat.

Here are the notes of the F Major scale across the entire fretboard:

The main notes to focus on when you try to memorize this scale is F and Bb.

You want to pay extra attention to F because it’s the root note, so you want to be able to easily find those note positions while improvising or writing riffs.

You also want to pay attention to the Bb positions to help you switch into this scale from C Major.

Here is the F Major scale diagram up to the 12th fret with the root notes highlighted on each string:

If you’ve already spent time memorizing the C Major scale, it should only take a day or two of practice to fully memorize the F Major scale.

Try playing the four examples to get a feel for how F Major sounds and where the correct notes are on the fretboard.

Instead of merely running up and down scale shapes, I recommend learning to randomly walk around the fretboard by focusing on the note names.

This feels harder in the beginning, but once you learn how to do this with one or two scales, all of the other scales quickly fall into place.

Find out more on memorizing the fretboard in this guide.

Here are the seven main chords in the F Major scale: 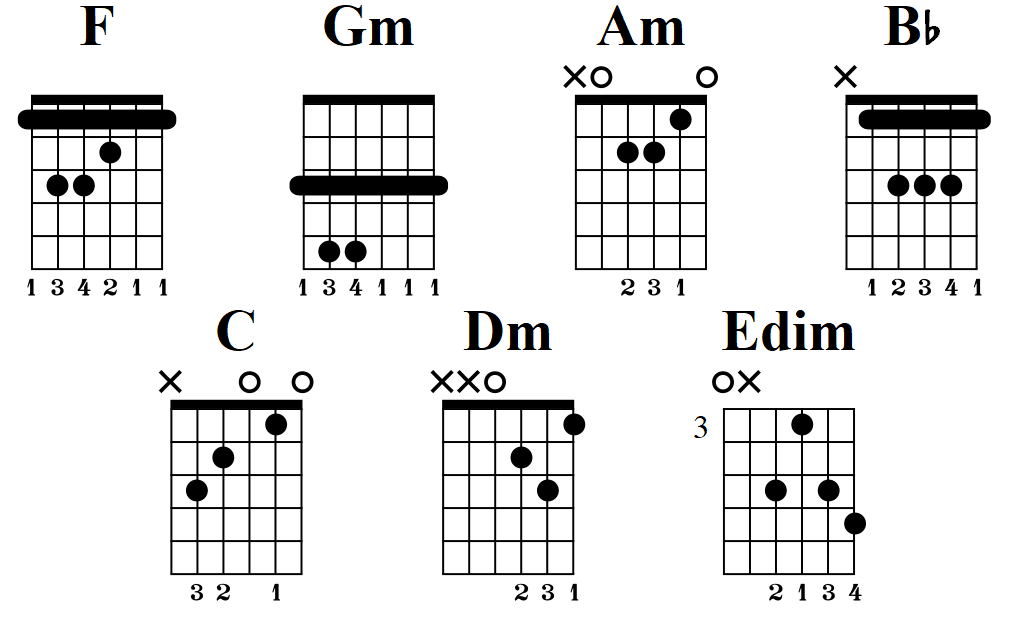 You probably already know how to play the chords Am, C, and Dm. All of the other chords apart from Edim (E diminished) are barre chords.

While the F Major scale is really easy to memorize, it may not be the best starting point for beginners if you want to write chord-based songs.

Once you learn how to play barre chords, the F Major scale becomes a lot more useful.

Don’t worry about memorizing Edim because you’re unlikely to use it.

Note: remember that the D minor scale uses the exact same notes as the F Major scale. This means the above chords also fit in the key of D minor.

While the above chord shapes might make it look like F Major isn’t an easy scale to write songs with, there are plenty of well-known songs in the key of F Major or D minor.

Songs in Drop D tend to work really well with the F Major scale. By focusing on the low open D string, the scale can be used to write songs in the key of D minor.

Check out Afterlife by Avenged Sevenfold or Everybody’s Fool by Evanescence for basic examples of songs in Drop D using the F Major scale.

How to Play in Drop D Tuning Lesson (Writing Riffs, Power Chords, Arpeggios)
How to Break Out of the Pentatonic Box
14 Must-Know Easy Guitar Riffs For Beginners (with TAB)
One by Metallica Guitar Lesson for Beginners
Ultimate Guide to Reading Chord Diagrams (Tips and PDF)
17 Best Alternate Picking Exercises (Easy to Hard with TAB)