The most common guitar tuning is ‘standard tuning’. It’s the tuning almost everybody learns guitar on and many guitarists stick to it for their entire lives.

But there are other tuning options and each alternate tuning brings new chord shapes and possibilities that aren’t possible in standard tuning.

In this guide, I will give you a thorough look at alternate tunings. You will learn:

To change to alternate tunings, it helps if you have an accurate guitar tuner. Check out this Ultimate Guide to Guitar Tuners to find a tuner if you don’t already have one.

Why Use Alternate Tunings

For many guitarists, standard tuning gives them everything they would ever want. Many guitarists feel no need to experiment with alternate tunings.

In a way, those guitarists are missing out. Alternate tunings can open up new doors to how to think about and how you play guitar.

Simply changing the way your guitar is tuned is like an artist adding a new color paint to his palette.

Here are three things alternate guitar tunings can do for you:

The chances are, you’ll benefit greatly from one of the three points above.

If you ever feel like you’re stuck playing the same scale runs, chord progressions, or licks, I highly recommend experimenting with alternate tunings.

Each tuning is like playing a different instrument. Some of them will feel familiar, while others will feel so foreign that it’s almost like starting from scratch.

As a simple example, here is the C Major scale on standard tuning:

Notice how the scale almost perfectly lines up on five out of six strings? If you were coming up with riffs or song ideas, imagine how this alternate tuning would completely change the way you think about what you’re playing.

What you can come up with in Open C tuning might open up your playing style in new directions or you may come up with something you never would have considered while in standard tuning.

If you haven’t experimented with alternate tunings before, I highly recommend it.

When we look at alternate tunings, we always compare them to standard tuning.

When looking at any of the alternate tunings in this guide, it’s important to know whether you need to change the string higher or lower to reach the correct note.

For example, when changing to Drop-D tuning (D A D G B E), you only need to change one string – the low E string to D.

But do you raise or lower the string? You might already know that you’re meant to lower the E down to D.

But what if you didn’t know and tuned the string the other way? You could end up breaking the string or placing a lot of tension on your guitar neck.

So it’s important to know for any alternate tuning which way you need to adjust the string.

In all of the below tunings, I use something called ‘scientific pitch notation’, which adds a number after every note so you know whether you need to tune a string up or down. Scientific Pitch Notation is explained below.

Scientific Pitch Notation is a fancy way of saying we add a number to each note so we know what note it is.

By looking at the numbers, we can see that E2 and E4 are two octaves apart with E4 being the higher pitch note.

This might seem confusing, but it becomes really helpful when dealing with alternate tunings.

For example: if somebody says to tune in ‘Nashville’ tuning, if we don’t include the numbers, it looks like standard tuning: E A D G B E. But Nashville tuning changes the tuning of four strings. If we use Scientific Pitch Notation, we can easily see which strings change and which way to tune them.

Nashville tuning is: E3 A3 D4 G4 B3 E4. Now we can see that we need to tune the bottom four strings up an octave (change to a lighter gauge set of strings first!) and leave the last two strings.

Most of the time you won’t need to worry about this numbering system. But it’s helpful to understand why it exists.

If you don’t want to worry about Scientific Pitch Notation, I’ve also color-coded each string to let you know if you need to tune up or down.

Open guitar tunings are a very popular form of alternate tunings and depending on what style of music you play, you may notice a lot of guitarists use them. Unlike some of the other alternate tunings shown later, open tunings feel completely different to play than standard tuning.

Open tunings allow you to play Major chords with one finger. If you play with a slide guitar, open tunings create incredible freedom to slide between full chords.

Tip: if you’re looking for an easy tuning to play around with as your first open tuning, I recommend Open G. Check out this Ultimate Guide to Open G Tuning for chord diagrams, songs with Guitar TAB, and tips on how to play in Open G tuning.

If you want to experiment with any of the below open tunings, I highly recommend learning how to use a guitar slide.

Check out this Guide to Slide Guitar to learn the basics, then check out this guide for some easy slide guitar songs to learn.

The below chart shows the most common open guitar tunings. 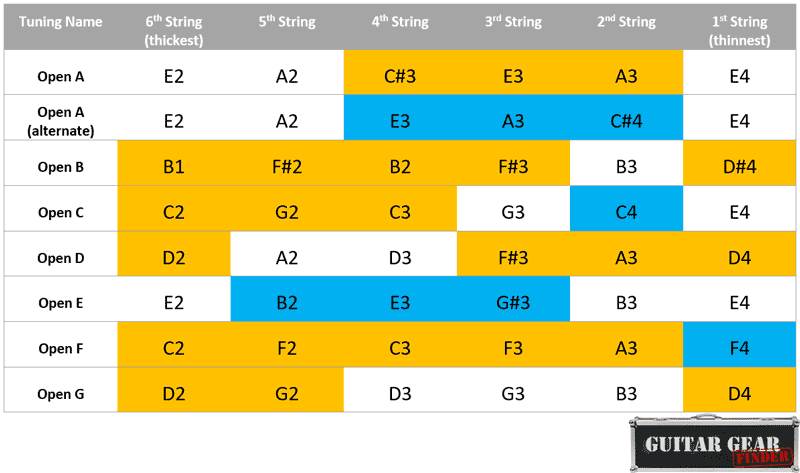 Notice that Open A tuning is shown with two versions. There are alternate versions for all of these tunings, but the most common versions have been included in the chart.

To see how variations are used in songs, check out my Guide to Open C Tuning here. It includes plenty of examples in ‘normal’ Open C tuning, but also a couple of interesting variations.

If you see an alternate tuning that you don’t recognize, look at the individual string notes and whether those notes form a chord. That will give you an idea what the tuning is based on.

For example: if an alternate tuning shows the strings as D A D F A D, those notes (D F A) form a D minor chord. That means that alternate tuning is based on D minor and you would call it ‘Open D minor’.

Here are some guides to get you started with open tunings:

These tunings take the standard EADGBE tuning and shift each string down the same distance.

This means all of the below alternate tunings will feel exactly the same to play as standard. The only difference is how they sound. The further down you go in the tunings (eg: 2 steps down), the lower everything will sound. Many heavy bands prefer to play in lower standard tunings to get a heavier or lower end to their riffs.

These tunings are great if you want to experiment with lower sounds, but want to be able to keep playing the same chords, riffs, and licks.

The below tunings chart shows the most common tunings you will see based on standard tuning.

It is easily possible to continue this pattern and go further than two steps down. In fact, baritone guitars commonly use a standard tuning two and a half steps lower than standard. Many baritone guitarists go even lower.

If you use one of the above tunings, you may notice your strings lose tension. The further down you tune your strings, the lower the tension will be.

If you want to use a low alternate tuning, read this guide to learn about string gauges and tension. Using a heavier gauge set of strings is important when playing in low tunings to keep the tension right.

While the name might suggest that these alternate tunings are common, they’re not. The idea behind ‘regular’ guitar tunings is that the interval (aka distance between notes) between each string is always the same.

These tunings overcome an issue you may notice with standard tuning where you need to play different shapes (eg: a power chord shape) depending on which strings you play. In the below tunings, you can use the same shapes on every string.

The below tunings are the three most popular regular tunings you will find. Not many guitarists use these tunings, but they’re interesting to play around with.

Other regular tunings are possible – all you need to do is make sure the distance between each string is exactly the same across the entire guitar.

Drop-D is the first alternate tuning most guitarists experiment with and I highly recommend it as your starting point if you’ve never used it before.

Check out my Ultimate Guide to Drop D Tuning Resources here to learn more about Drop D including songs (with Guitar TAB examples) to try out.

To change to Drop-D tuning, all you need to do is lower the low E string down to D. In other words, you ‘drop down to D’. Drop-D is a great example of how useful alternate tunings can be. Simply changing one string’s tuning can open up new ways of playing and thinking about guitar.

The below tunings all take the Drop-D idea and shift down to lower notes. Once you learn how to play in Drop-D tuning, you can play the same riffs, chords, and licks in any of the below tunings.

Remember that the lower down you tune your strings, the lower the string tension will be. If you try to tune to Drop B or Drop A with standard guitar strings, you may find they become slack and muddy sounding. Using heavier gauge strings will make lower tunings sound and play better.

Drop C is a surprisingly common tuning – especially in rock and metal. If you enjoy playing in Drop D and want to take things further, Drop C is a good next-step.

Learn about Drop C Tuning here including songs to check out.

Sometimes guitarists like to experiment with weird guitar tunings to give them inspiration and come up with new ideas.

Putting your guitar in a weird tuning forces you to think differently and you may come up with interesting ideas.

Here are some fairly common guitar tunings that are a bit different than the above alternate tunings. Some of these tunings are used by a lot of guitarists, while others you may never see again.

The tuning Chris Cornell used on the song Seasons is a great example of a weird tuning. If you try it, it will force you to completely rethink how you write guitar parts.

If you’re looking for the weirdest guitar tuning, I highly recommend trying out Ostrich tuning. With this tuning system, you tune every string to one note (eg: E in the above example, but any note is possible). After every two strings, you jump the tuning up an octave. This means you have six strings playing three different octaves.

It might look like a dumb tuning, but it’s incredibly fun to play around with. The name came from Lou Reed, who tuned to ‘D Ostrich’.

If you want to experiment with alternate tunings, I’ve created a handy PDF you can print with all of the above tunings listed.

Get Started With Alternate Tunings

The below guides give you a good starting point if you want to try out some open tunings. The guides include chord diagrams, scales, songs with Guitar TAB, and tips.