Open G is one of the most popular open tunings for guitarists. The tuning works extremely well with a guitar slide as well as strumming simple chord progressions.

In this guide, you will learn

If you want to try and use a guitar slide in Open G tuning, check out this lesson for some tips on how to get started.

How to Tune Your Guitar in Open G Tuning

To tune your guitar into Open G, you need to change your strings to D G D G B D. This is easy to do from standard tuning.

Use a good tuner and once you get through all six strings, go back and check the tuning again. Changing the tuning of the strings lowers the overall tension on the neck, so don’t be surprised if the strings shift out of tune after a while.

If you enjoy playing in Open G tuning and want to keep your guitar in Open G, you may want to consider using a slightly heavier gauge set of strings. The lower tuning loosens the strings, so to overcome this, use a heavier set.

The lower string tension may also reduce the action height on your guitar. This might be good or bad, depending on your playing style.

If you plan on using a guitar slide, you may want to increase the action height for better clearance. Check out this guide to learn more about action height.

What makes open tunings like Open G fun to play is how easy some chord shapes are. Slide guitarists love playing in Open G Tuning because they can slide back and forth between major chords using a slide.

Here is how you play a Major chord in Open G tuning:

Why only five strings?

You might notice that the above chords skip the low 6th string. You can strum all six strings to play the full open G chord. But it’s more common to skip strumming that string.

You may notice that a lot of guitarists who play in Open G tuning this way. A classic example of this is Keith Richards, who goes as far as to completely remove the string as shown below.

The reason you may want to skip strumming the sixth string is if you want the root note to be the lowest note in the chord. The root notes line up on the fifth string.

To play any other Major chord (eg: D Major, Bb Major), simply move your first finger up or down the fretboard. The note on the fifth string will tell you what chord you are playing (eg: 7th fret on the fifth string is D, so the chord would be D Major).

The moveable minor chord shape is similar to a standard Am chord shape, but you’ll need to rearrange your fingers to fit in the extra note.

Just like the moveable Major chord shape, you can play any minor chord you want by moving the above chord shape up or down the fretboard. Simply line the root note up on the fifth string.

To turn a Major chord into a dominant seventh chord, you simply change the note on the first string as shown below:

If you use your first finger to bar across the fret, use your fourth finger to play the high note.

Here are two more moveable chord shapes that can be useful when coming up with chord progressions in Open G tuning.

As you can see, you can easily jump into these chord shapes from any Major chord shape. Experimenting with these two chord shapes in place of a Major chord in your progression can take your songwriting in different directions.

Here are some other easy open chord shapes for Open G Tuning. Some of the shapes you can move up and down the fretboard, while some may be too awkward to shift. 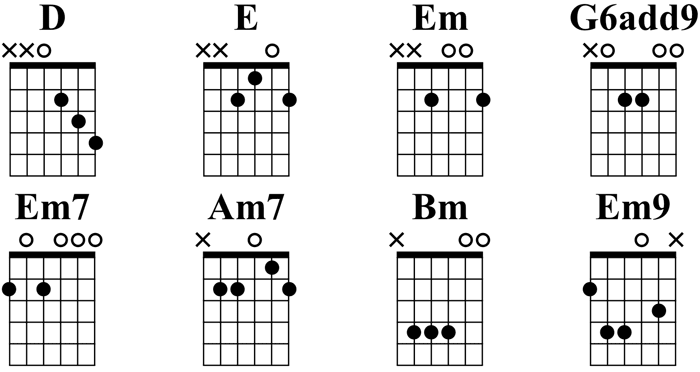 Once you get used to the notes on the fretboard while in Open G Tuning, you’ll find it easy to come up with other chord shapes. The above open chords should give you enough to play around with and come up with some good chord progressions.

Here is a printable PDF with all of the above chord shapes in Open G Tuning.

If you enjoy Open G Tuning, it’s worth spending the time to memorize the notes on the fretboard.

Here are the notes of the fretboard in Open G Tuning:

This is an easy tuning to memorize because you only need to memorize three different strings (D, G, B). If you’ve already memorized the notes in standard tuning, you already know those strings. So all you need to do is get used to the new order of strings.

If this is the first time you’ve tried to memorize an alternate tuning, you might be surprised by how quickly you can memorize it. The repeated strings make the job quick and easy.

Here are the notes in the G Major scale in Open G Tuning:

It should be no surprise that a lot of songs written in Open G Tuning use the G Major scale. So memorizing the note positions in G Major is worth the effort.

Another popular scale in Open G Tuning is D Major due to the number of open D strings the tuning uses:

If you’re a slide player, it should be obvious why this tuning is so popular when playing with a slide. You can see from the above diagram which chord shapes fit in the scale (eg: G Major, A Major, B minor, etc.).

If you really want to see what an open tuning like Open G feels like to play, there are some great songs worth checking out.

The below songs all use Open G tuning and give you an idea of what is possible when you use alternate tunings.

Brown Sugar by The Rolling Stones

The below TAB shows the opening chords to the song Brown Sugar.

While it is possible to play this song in standard tuning, the song feels and sounds great when played in Open G.

Here are some other great songs by The Rolling Stones in Open G Tuning:

It’s also worth mentioning that Keith famously plays his guitar with the low 6th string removed.

When you look at the chord diagrams from earlier, it should be clear why. When the 6th string is removed, the bottom notes in the chord match the chord root notes.

If you want to properly mimic Keith’s style of playing, don’t play the low 6th string.

Watch Over You by Alter Bridge

This song (and the awesome acoustic version) showcases some great sounding chords that use incredibly simple shapes.

The above Guitar TAB should give you an idea how an open tuning can be perfect when playing a strumming song like this one.

Being able to constantly strum those open strings while sounding great isn’t something that works well in standard tuning.

After learning the above part, I recommend experimenting with shifting that chord shape around the fretboard to find the positions where it works. Then try and come up with your own ideas based on this song.

That’s The Way by Led Zeppelin

The simple strumming pattern and progression in this song makes good use of the open strings in Open G.

If you have a looper pedal (check out this guide to learn about looper pedals), I highly recommend recording this progression and learning to play over the top of it.

Being able to improvise and come up with lead parts in an alternate tuning takes some time to master, but a simple rhythm part like this one is a perfect way to practice.

If you play with a guitar slide, check out this lesson for Guitar TAB to In My Time of Dying. While that song was recorded in Open A tuning, it was performed live using Open G tuning.

Check out Dancing Days and Traveling Riverside Blues for some other examples of Led Zeppelin songs in Open G tuning.

As mentioned earlier, a lot of guitarists skip playing the sixth string when in Open G tuning (or completely remove the string if you’re Keith Richards). Changing the tuning makes perfect sense and this song is a great example of why you might want to do the same.

While this song works fine in normal Open G tuning, it should be clear why changing the low D string to G makes more sense. All of the chord shapes from earlier work better as the bottom string plays the root note.

Because there are now two low G strings, you get an interesting doubling up on the root note.

Here are some more songs in Open G tuning:

To learn about other alternate tunings, check out my Ultimate Guide to Alternate Tunings here.

Or if you want to try a different open tuning, check out my Guide to Open C Tuning here. It feels completely different to Open G tuning and there are some great songs to play.

The guide includes other popular open tunings as well as some other weird tunings that are great fun to experiment with.