Drop D tuning is the most popular alternate tuning for a good reason. Drop D is fun to play and can help you come up with new riffs and ideas that you might not have thought of while in standard tuning.

In this lesson, I will walk you through some simple riff writing exercises to show you how to play in Drop D tuning.

If you don’t know how to tune your guitar in Drop D tuning, check out this guide. The guide explains Drop D tuning as well as common chord shapes and scales you can use in Drop D.

What is Drop D Tuning

Drop D tuning is when you take your low E string and tune it down to D. All the other strings stay the same, so you end up with the tuning D A D G B E.

While Drop D tuning is very popular with rock and metal guitarists, there have been countless songs written in Drop D tuning in many different styles of music.

Check out this guide on Drop D Tuning Resources to learn everything you would want to know about Drop D tuning before you try the below riffs and exercises.

What makes Drop D interesting to play is you can play a power chord with one finger. The below exercise will show you how to play power chords in Drop D tuning and how easy it is to move back and forth between different power chords.

All of the chords shown above are played by flattening your first finger (index) across the strings. Strum the first power chord (it’s a G power chord) eight times, then slide your finger up to the ninth fret to play the next power chord (B power chord).

Getting a good tone

This style of playing sounds best with som distortion or overdrive to get a rock/metal tone.

If you want to learn how to get different tones from your amp, check out my Guitar Effects Course.

Tip 1: once you learn the above strumming exercise, try playing it again using palm muting. Use all down-picking to get a powerful rock/metal chugging sound.

The one-finger power chords in Exercise 1 are great fun to play, but sometimes you might want to spice up your power chords to sound a little different. Drop D tuning makes it easy to create variations on the standard power chord that sounds great to play.

The below example takes Exercise 1 and slightly changes the power chord shapes.

Flatten your first finger across the fifth fret, then use your third finger to play the seventh fret. This chord shape is called a ‘sus2’ chord (sus stands for suspended) and is used a lot by guitarists who play in Drop D tuning.

The great thing about this chord shape is you can move it up and down the fretboard in the same way you do with power chords. In the second bar, you simply slide the chord shape up to the ninth fret.

In the third bar, instead of playing a sus2 chord, we’re extending the one-finger power chord across four strings. You can play this shape any time you play a power chord in Drop D tuning. Sometimes this shape is used to create a bigger sound.

Tip 1: try this exercise with palm muting and compare it to the first exercise. Think about which you prefer and why.

Tip 2: try mixing up the chord shapes you now know. Come up with a progression that uses the one-finger power chord, the sus2 shape, and the four-string power chord shape. You can mix them up as you like and don’t have to only play one type.

With this riff, only palm mute the open string power chords. All the other power chords are played without palm-muting to help them stand out.

Playing power chords in Drop D with one finger at a time makes it easy to speed a riff like this up. You can come up with fast-flowing power chord riffs that are easy to play in Drop D that would be harder to play in standard tuning.

Let’s take the above exercise and instead of picking each power chord separately, let’s slide between the chord positions.

Everything is the same except for how we play the power chords. This time, you pick the first power chord, then slide your finger (any finger you choose) to the next power chord position.

This is a popular style of playing for metal bands because you can come up with fast-moving power chord riffs that are easy to play.

Try to keep the rhythm constant so each power chord lasts the same length. Continue to palm mute the open string power chords.

While power chords are fun to play in Drop D tuning, let’s look at something different. Let’s use the low open D string and play some octaves at the same time.

The ‘x’ in between the chord shape simply means you don’t let any notes ring out on that string. Your first finger should rest against the fourth string to keep it muted while you play these octave shapes.

As you strum and slide between the octave shapes, keep the low D string ringing out. A lot of guitarists like to play in this style when in Drop D tuning. You can see a very similar riff in the song Everlong by Foo Fighters (also in Drop D Tuning).

The chord in the last two bars is a four-string power chord as you learned from an earlier exercise. This is an example of how you can mix up power chords and octaves to create interesting progressions.

Tip: Try changing the power chord in the last two bars to a different power chord. Try different positions such as the third fret, fifth fret, or any other and hear how it sounds after playing the first two bars. The more you experiment, the easier it will be for you to come up with your own riffs and parts.

An ‘arpeggio’ is simply when you pick the notes of a chord separately instead of playing them all together. Here is a simple arpeggio riff that uses the low D string power chord and moves some notes around on the fourth string. 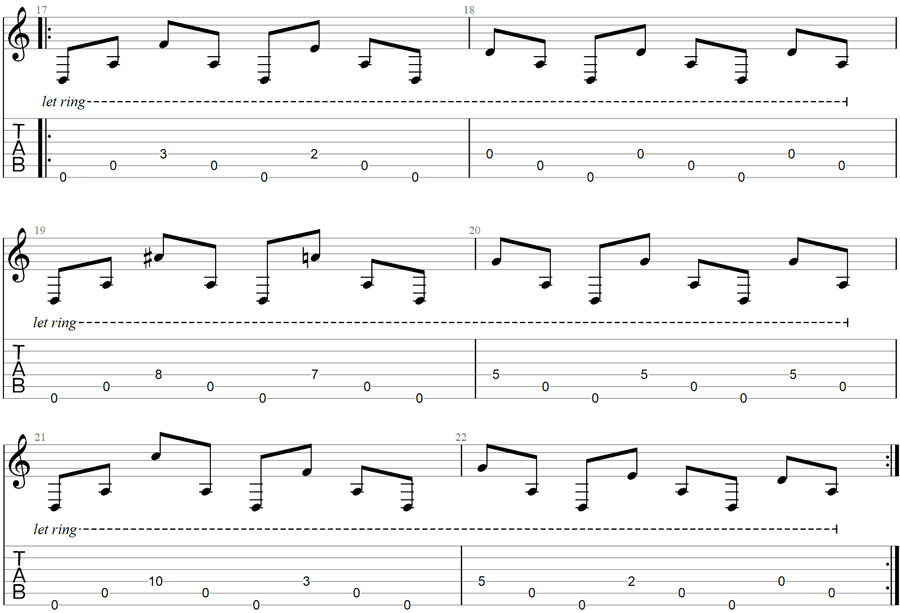 Use a clean tone and let all of the strings ring out as you play this riff.

If you like this style of playing, check out the song Aerials by System of a Down. It plays a very similar riff in Drop C tuning (which you can still play in Drop D tuning if you want to).

Tip 1: Try taking the above riff and changing the notes that move around on the fourth string. Find out which notes sound good and which don’t. Then try coming up with your own arpeggio riff in a similar style as this one.

Tip 2: if you have any effects pedals, use a clean tone and try adding in some effects. Phaser, delay, chorus, or any other effect will add something interesting to this riff. To learn about different effects and how to use them, check out my Guitar Effects Course.

Tip 3: try combining a few of the above exercises to play as a full song. Mix up some arpeggios, power chords, and octaves and try to come up with your own ideas based on these riffs. Once you do it a few times, you might be surprised by how easy it is to write songs in Drop D tuning.

To learn some songs that are in Drop D tuning as well as chord shapes, scale diagrams, and more, check out my Ultimate Guide to Drop D Tuning here.