Learning how to figure out what chords are in a key is a useful skill any musician can learn. Once you learn this skill, you’ll be able to use it all the time.

If somebody says “let’s jam in the key of E”, what chords could you play that will fit with that key?

In this guide, let’s walk through how to figure out the main chords in any key using some simple methods.

To learn more about chords and scales as well as some basic music theory, check out these guides:

While this guide is written for guitarists, you can use it to find the chords in a key for any other instrument.

Finding Chords in the Key of C (Example 1)

Let’s use the key of C as an example and figure out all of the chords that fit in that scale. The ‘key of C’ uses the C Major Scale (link to scale resources).

To figure out what chords are used in a scale, we need to know what notes are in that scale.

If you want to be able to figure out what notes are in any Major or minor scale, read this guide on Scales Explained Simple.

Once you know what notes are in the scale, you can start figuring out what chords fit in that scale.

This pattern is important to remember. The first chord in a scale always follows this pattern as you will see later.

Now, what if we take that same pattern and start on the second note of the scale instead?

We’re using the same pattern of skipping every second note, but this time we’re starting on the scale’s second note, D. We end up with the notes D F A.

If you know your basic Major and minor chords, you might recognize these notes (don’t worry if you don’t).

The notes D F A form the D minor chord.

This means the second chord in the C Major scale is D minor.

Let’s repeat this starting on the third note of the scale:

The three notes this time are E G B.

You might recognize these notes as part of the E minor chord. So the third chord in the C Major scale is E minor.

Seeing the pattern yet?

Here are all seven chords highlighted from the scale (the dark green circles show each chord’s root note): 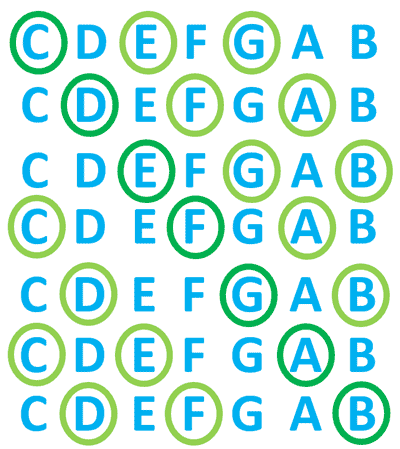 By following the same pattern on each note in the scale, we’re able to easily figure out all seven main chords that fit in the key.

For example, the fourth chord in the key of C uses the notes: F A C, which gives us the chord F Major.

Here are all the chords highlighted above:

What we have just done is called harmonizing the scale. It’s a fancy name for figuring out which chords fit in a scale.

Don’t worry if this doesn’t make 100% sense yet, once you go through the rest of the examples below, it will become clearer.

Finding Chords in the Key of G (Example 2)

Let’s go through another scale as practice. The key of G uses the G Major Scale (link to scale resources)

We can use the same pattern as shown in the earlier example to figure out what chords fit in the key of G.

Try figuring out all the chords in that key on your own before continuing.

Here is the G Major scale with all of the chord notes highlighted: 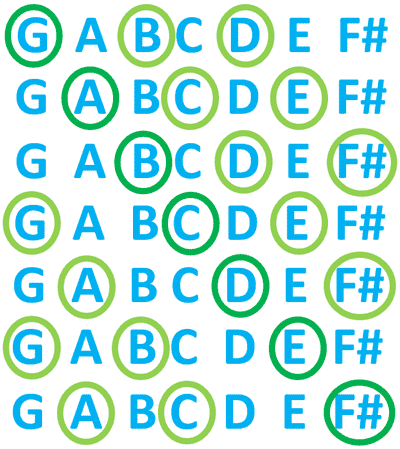 Here’s a breakdown of each chord in the scale:

Take a close look at the order of the type of chords (eg: Major, minor, diminished).

Quick Method to Figure Out Chords in a Key

Don’t worry if the theory seems overwhelming at first. Once you get used to the pattern used in the two examples above, you’ll get the hang of it.

Here’s a different way of looking at what type of chords are used in a key.

If you compared the chords in the C Major Scale and G Major Scale, you might have noticed that the order of the chords stay the same.

Let’s compare the results of the two scales we worked out above:

If you memorize this order, you won’t need to worry about trying to figure out whether a chord should be Major or minor.

This means you can easily figure out the chords in any scale by applying this order of chords to the notes in the scale.

What is a Diminished Chord?

You may have noticed that the seventh chord in any Major scale is a ‘diminished’ chord. If you’re a beginner or intermediate guitarist, you may have never come across diminished chords.

If you look up a chord diagram for a diminished chord and play it, you might find that the chord sounds strange or awful to your ears.

While diminished chords are certainly used in music, they’re nowhere as common as Major or minor chords.

You may learn to use diminished chords in your music later on, but if you’re just getting started, you can safely ignore them for now. Focus on the other six chords in the key and you’ll be fine.

Let’s try this on the F Major scale which uses the notes: F G A Bb C D E

If we follow the order of chords from before, we get: F Major, G minor, A minor, Bb Major, C Major, D minor, E diminished.

Let’s check if this is correct by harmonizing the F Major scale: 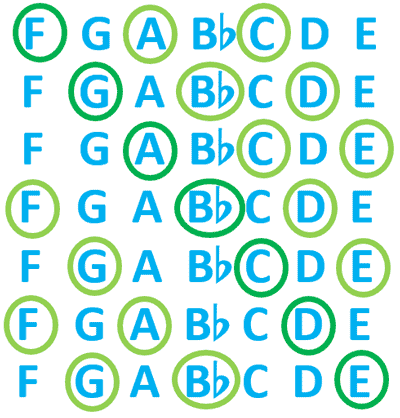 It doesn’t matter whether you memorize the order of the chords or if you use the note pattern – you should always end up with the same chords.

Practice this method using the A Major scale (link to scale resources). The A Major Scale uses the notes: A B C# D E F# G#

Try figuring out on your own what chords fit in the key of A using the above information.

We can use the same note skipping pattern to figure out what chords fit in a minor scale.

Here is the C minor scale with all chord notes highlighted: 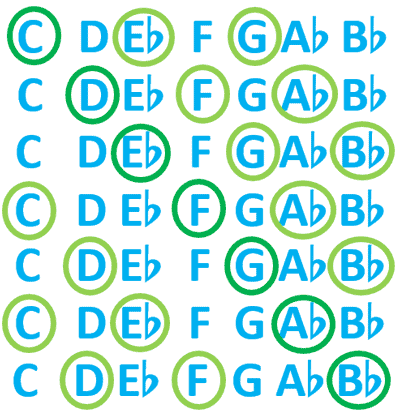 If we look at the intervals between these chord notes, we get:

As you might expect, the order of the chords has changed because it’s a different type of scale. But it’s the same order of chords for every minor scale.

You now know how to figure out the chords in any key (Major or minor). It might take a bit of practice to get used to this, but once you do it a few times, it will feel easy. You’ll be able to use this knowledge to join in on any jam and start writing songs in any key.

Chords in a Key Chart

Once you learn how to use the methods explained above, you’ll be able to easily figure out the main seven chords from any key.

In the meantime, the below chart gives you a quick way to find the chords in any Major scale: 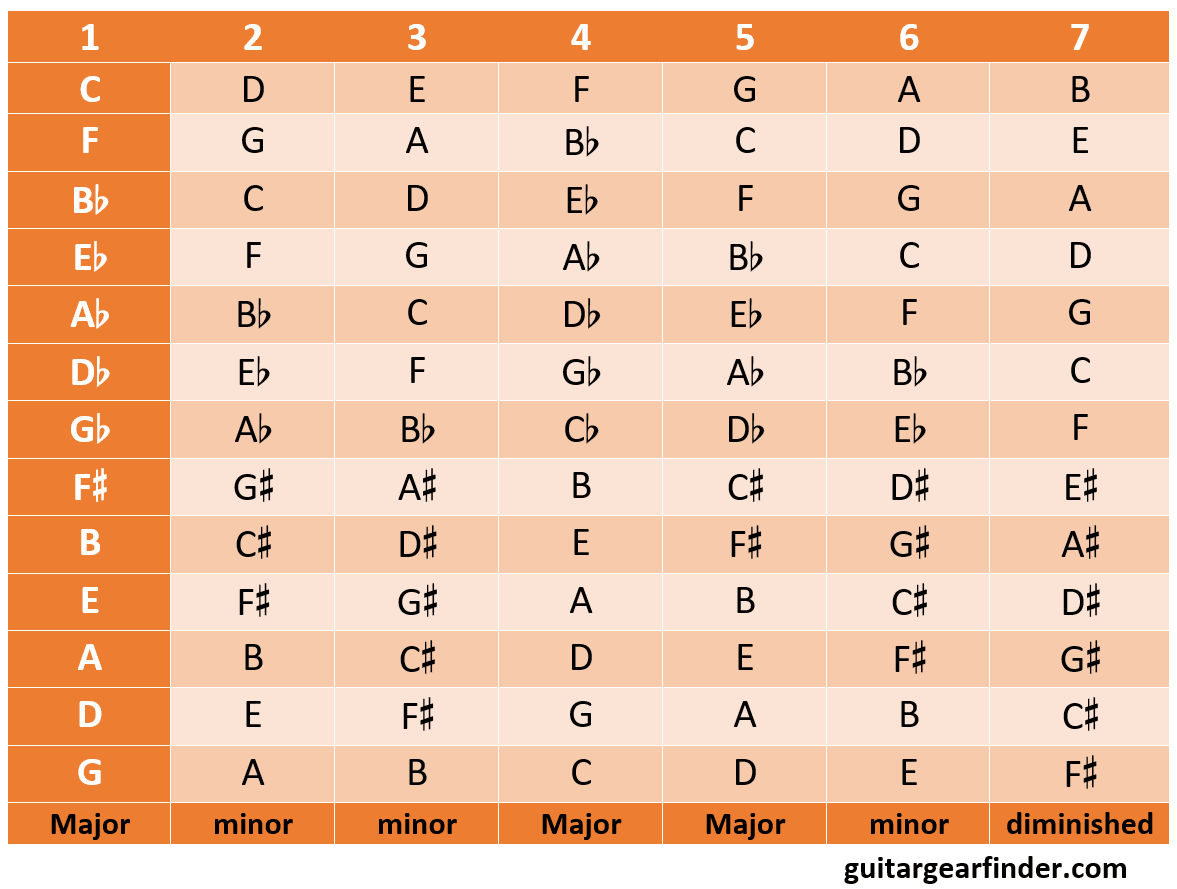 Finding Chords in a Key Summary

To find the main chords used in a minor scale, the order starting from the root note will be minor, diminished, Major, minor, minor, Major, Major.

The more you learn about music theory, the easier it will be to understand how chords and scales are related to each other. Even if you don’t know anything about music theory, you can use the methods covered in this guide to figure out all the chords in any key.

Check out these scales resources for handy charts and diagrams for common scales you might use.

To learn more about chords and scales as well as some basic music theory, check out these guides: