Eb Tuning (aka E Flat Tuning or Half-Step-Down Tuning) is an incredibly popular alternate guitar tuning that a lot of guitarists prefer over standard tuning.

The big advantage with Eb Tuning is that you can play all the songs you know from standard tuning and they’ll sound slightly different.

Once you read through this guide, check out my Ultimate Guide to Alternate Tunings to learn about other popular tunings you might want to try.

Table of Contents show
1 How to Tune Your Guitar in Eb Tuning
1.1 String Tension in Eb Tuning
2 Why You Should Try Eb Tuning
2.1 You Can Play a Lot of Songs The Right Way
2.2 Easier on Your Fingers
2.3 Get a New Sound
3 Eb Tuning Chords
4 Eb Tuning Guitar Songs
5 Eb Tuning Fretboard Diagram
6 Eb Tuning FAQ
6.1 How Do I Tune my Guitar to E Flat?
6.2 Is Eb the Same as E Flat?
6.3 Why Do Guitarists Tune to E Flat?
6.4 What Tuning Did Jimi Hendrix Use?
6.5 Why Do Strats Sound Better in E Flat?
6.6 Why Do Rock Guitarists Tune Down a Half Step?
6.7 Is E Flat the Same as D Sharp?
6.8 Related Guides and Lessons:

How to Tune Your Guitar in Eb Tuning

To tune your guitar into Eb Tuning, you need to tune each string down one half-step (or semitone). The strings in Eb Tuning are tuned to: Eb Ab Db Gb Bb Eb

This is an easy alternate tuning to remember because each string is tuned down the same distance.

Some people call Eb Tuning ‘Half-Step-Down’ Tuning, which makes it easy to remember how to change into this tuning. Just tune each string a half-step down (a half-step is one fret distance on guitar).

It’s important to remember any time you change to a different tuning that you will be changing string tension. Any change in string tension will change how your guitar feels to play and some tunings can cause changes in the guitar’s neck stability.

Because Eb Tuning tunes every string down a half-step, you will notice a slight decrease in string tension across all strings.

Many guitarists like to play in Eb Tuning because of this lower string tension. Bends and vibrato feel easier to play, so it’s a good way to learn these techniques.

If you don’t like the lower string tension when you play in Eb Tuning, you can easily fix this by using a higher string gauge. Read this guide on Guitar Strings to learn more about string gauge and tension.

Why You Should Try Eb Tuning

If Eb Tuning just tunes each string down a half-step, what’s the point?

Here are a few reasons why you should try out Eb Tuning:

You Can Play a Lot of Songs The Right Way

Have you ever played along with a song and it sounded slightly out? The chances are the song was recorded in Eb Tuning.

While you can learn how to play songs written in Eb Tuning on your guitar in Standard Tuning, it’s not going to sound quite right. If you try to play along with the song, it’s going to sound bad.

Try out Eb Tuning and you’ll be able to play along with those songs and have the sound right.

Easier on Your Fingers

Every beginner knows how uncomfortable it can be to learn techniques such as bends or barre chords.

Eb Tuning can help you learn and work on techniques while giving your fingers a slight break.

The reason you might want to put your guitar in Eb Tuning to work on these techniques is that Eb Tuning will slightly lower your string tension. Bends will feel easier to play and barre chords won’t feel as awkward.

If you’ve been struggling with pain in your fingers or wrist, try out Eb Tuning. Also, read this guide on finger pain to learn how to properly deal with it.

Get a New Sound

While Eb Tuning feels exactly the same to play as Standard Tuning, it will sound different. Songs seem to take on a completely different feeling when you play them in Eb Tuning.

The slightly lower pitch can make some songs sound heavier than if they were played in Standard Tuning. Other songs may take on a moodier or darker quality.

The reason so many guitarists prefer to write and record songs in Eb Tuning is because of the slightly different quality it gives their songs. Try out Eb Tuning and you’ll hear how it changes the songs and licks you already know.

The great thing about Eb Tuning is that all the chords you already know are played exactly the same in Eb Tuning. The only difference is that the chord names slightly change.

For example, if you know how to play the chord E minor in Standard Tuning, the same chord shape played in Eb Tuning becomes the Eb minor chord (say: E Flat minor).

Here are some common open chords and what they’re called when played in Eb Tuning: 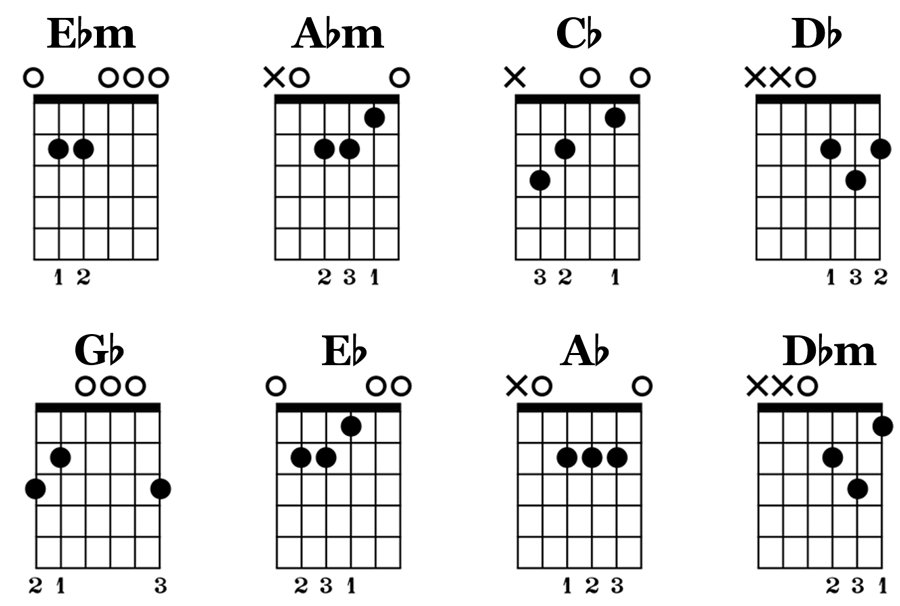 For any chord you know in Standard Tuning, just take the root note and lower it by a half-step to know what the chord is called when you play it in Eb Tuning.

Technically, you can play any song you would normally play in Standard Tuning and play it in Eb Tuning. The song will sound slightly different, but it will be completely playable.

So if you want to see why so many guitarists prefer playing in Eb Tuning, tune your guitar to Eb then try playing some songs you already know. You’ll hear how this tuning changes the feel and sound of the song.

There are a lot of popular songs that are in Eb Tuning. If you’ve ever tried to play along with a song in Standard Tuning and it sounded slightly out, the chances are the song was recorded in Eb Tuning.

Here are some popular songs in Eb Tuning:

Some guitarists and bands regularly tune to Eb Tuning, so if you find a song in Eb Tuning by someone, check out their other songs. For example, most songs by Guns N’ Roses, Jimi Hendrix, or Stevie Ray Vaughan are in Eb Tuning.

Check out my guides on Jimi Hendrix or Slash to learn more about guitarists who use Eb Tuning as their main tuning.

Some bands like to record their songs in Standard Tuning, then perform them live in Eb Tuning. They do this to make it easier for the vocalist as the high notes will be slightly more comfortable to sing.

Most of Metallica’s songs are recorded in Standard Tuning and performed live in Eb Tuning. Compare the studio version of a song with a live version and you’ll hear how changing to Eb Tuning changes the sound and feel of the song slightly.

There are two ways to think about the fretboard when you’re playing in Eb Tuning.

The first way is to imagine you’re still in Standard Tuning. Imagine you’re playing the same scales and chords and the note positions on the fretboard are the same. This makes it easy to play because you don’t need to change the way you think about what you’re playing. All you need to remember when playing with other musicians is that everything you play is a half-step (or one fret) lower in pitch.

I recommend this method for beginners and intermediate guitarists because it allows you to quickly get into using Eb Tuning without getting confused by the changes. If you imagine you’re still in Standard Tuning, you’re going to feel comfortable with what you play.

The second way is to memorize the new note positions on the fretboard. This might seem daunting at first, but if you look at the fretboard diagram below, you’ll notice that all the notes you know from Standard Tuning are there – they’ve just moved one fret higher.

I recommend this method for advanced guitarists because it will give you more flexibility when jamming with other musicians. It doesn’t take long to memorize the note positions in Eb Tuning, so if this is a tuning you will regularly use, it’s worth the effort to memorize.

Here is a fretboard diagram for Eb Tuning up to the 12th fret:

Remember that Eb and D# are played on the same fret, so you can read the above diagram using either flats or sharps.

If you haven’t already memorized the fretboard in Standard Tuning, read this guide to learn two effective methods to memorize the fretboard.

Eb Tuning is an easy alternate tuning to try out because it plays exactly the same as Standard Tuning. But the change in pitch and string tension change the sound and feel of anything you play.

Here are some common questions you might have about Eb Tuning:

How Do I Tune my Guitar to E Flat?

Is Eb the Same as E Flat?

Eb is the same as E Flat. The little ‘b’ represents a flat symbol, which isn’t available in most fonts. Any time you see a little ‘b’ after a note name, it means to play that note flat, which is a half step lower than usual.

Why Do Guitarists Tune to E Flat?

What Tuning Did Jimi Hendrix Use?

Why Do Strats Sound Better in E Flat?

Why Do Rock Guitarists Tune Down a Half Step?

For example, Metallica records their music in Standard Tuning, then performs the songs live tuned down a half step to get a slightly heavier sound and to make it easier on the vocals.

Is E Flat the Same as D Sharp?

Yes. The E Flat pitch and the D Sharp pitch are exactly the same. The two terms are used in different ways in theory, but from a practical point of view, the two notes are the same.

Want to try out other alternate tunings? Check out this Ultimate Guide to Alternate Tunings to learn more.