The E Major Scale is a fairly common scale you’ll see used on a lot of popular songs. It may not be as common as E Minor (G Major), but it’s a good scale to learn on guitar.

This guide covers open chords, note positions on a fretboard diagram, popular songs in E Major, and everything else you might want to know about the scale.

I suggest learning the E Major scale after you memorize the A Major scale, because changing from A Major to E Major only needs you to change one note.

Once you learn some basic music theory you will understand how two different scales can use the same notes, but for now, all you need to do is remember that both E Major and C# minor scales use the same notes.

This means you can use all the diagrams, exercises, and chords covered in this guide for both the E Major scale and the C# minor scale.

Notes in the E Major Scale

The E Major scale uses four sharp notes. The notes in the E Major Scale are: E F# G# A B C# D#

This is what the key signature for E Major looks like:

Even if you don’t know how to read music, if you see a key signature with four sharp symbols, it means the music is in E Major (or C# minor). Find out how to read standard notation in this guide.

If you compare the notes in the A Major scale (A B C# D E F# G#) and the E Major scale, you’ll notice that the only difference is the note D#.

If you know the basics of intervals (learn about intervals in this lesson), you’ll start to see the patterns as we move from C Major to G Major to D Major to A Major to E Major.

Notice the jump in fifths between each scale root note? If you can, you can probably already figure out what the next scale in the series might be (hint: what’s a fifth up from E?).

Answer: if you’re wondering what the next scale is after E Major using the circle of fifths, it’s B Major (learn the B Major scale here).

Here are the notes of the E Major scale across the entire fretboard:

When memorizing this scale, try to pay extra attention to all of the ‘E’ positions. You want to focus on all of the positions where you play E because that’s the root note of the scale. Memorizing those positions first helps you when writing riffs, licks, or improvising.

As I mentioned earlier, I highly recommend you start by memorizing the C Major scale, then work your way through the circle of fifths.

By the time you get to the E Major scale, you won’t even need to spend time memorizing it. You’ll be able to instinctively change D to D# as needed.

Here is the E Major scale diagram up to the 12th fret with the root notes highlighted on each string:

Something you might notice about this scale is that it doesn’t use the open G string or the open D string. The most common guitar scales make use of the open strings, so it might feel a bit strange playing a scale that doesn’t use these two strings.

This is why the E Major scale isn’t as popular in standard tuning as other scales that make full use of all open strings.

If you’ve already spent time memorizing the A Major scale, you might be surprised by how quickly you can fully memorize the E Major scale.

Try playing the examples to get a feel for how E Major sounds and where the correct notes are on the fretboard. Then I suggest trying to come up with your own examples of scale runs in different positions on the fretboard.

Because the E Major scale uses four sharp notes and it doesn’t use the open D or G strings, you may need to use some barre chords if you want to create chord progressions in the key of E.

Here are the seven main chords of the E Major scale: 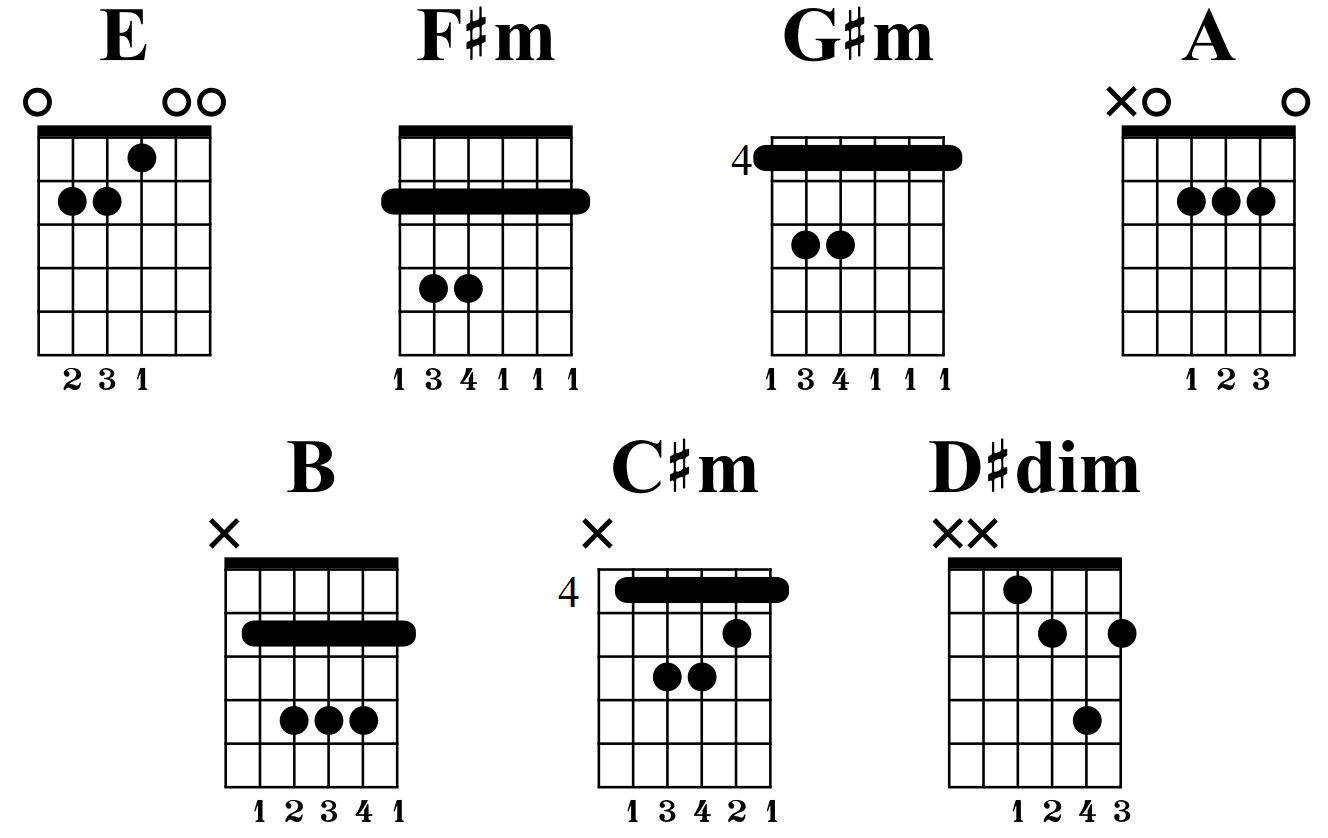 When you compare these chords with chords in the C Major, G Major, or F Major scales, you’ll see why I suggest starting with these scales.

If you feel comfortable with barre chord shapes, try creating some chord progressions using all of these chords (except D#dim). Get a feel for how the key sounds before you go on to learning some songs in the key of E.

Don’t worry about the last chord (D#dim) as you’re unlikely to use it. If you learn the theory behind harmonizing a scale (which is how you figure out what chords fit in a scale), you’ll understand why every Major scale includes a diminished chord.

Note: remember that the C# minor scale uses the exact same notes as the E Major scale. This means the above chords also fit in the key of C# minor.

While the E Major scale contains fewer open chord shapes than other scales, there are still a lot of popular songs that were written in E you might want to check out.