Open E Tuning is a fun tuning to use on guitar as you’re able to play full open chords with a single finger or a guitar slide.

If you want to try and use a guitar slide in Open E tuning, check out this lesson for some tips on how to get started.

How to Tune Your Guitar in Open E Tuning

To tune your guitar into Open E, you need to change your strings to E B E G# B E.

Keep the Low E, High E, and B strings the same as Standard Tuning. Raise the A string a whole step to B and the D string to E. Raise the G string to G#.

Use a good tuner and once you get through all six strings, go back and check the tuning again. Changing into an alternate tuning like Open E Tuning changes the tension on the neck, so you may need to make a few adjustments in tuning as the guitar neck settles to the new tension.

Keep in mind that some of the strings in this tuning are tuned higher than Standard Tuning. Adjust the tuning on those strings slowly to help prevent breaking any strings.

Raising the tuning on a string increases string tension, which may feel uncomfortable to play. So if you really enjoy playing in this tuning, you might consider changing to a lighter gauge of strings.

What makes open tunings like Open E fun to play is how easy some chord shapes are. You can play full chords with one finger, or you can slide back and forth between chords with a guitar slide.

Here is how you play Major chords in Open E tuning:

This is why open tunings are so popular with slide players – you’re able to play a full chord across a single fret.

To play an E Major chord, you simply strum the open strings. To play a G Major chord, flatten your finger across the third string.

If you haven’t learned how to play barre chords before this might feel awkward, but once you get the hang of pressing your finger across the strings, you’ll see why open tunings are so popular.

While Major chords are simple in Open E, there are still a few easy chord shapes for minor chords.

Here are a few examples of minor chord shapes in Open E tuning:

Some of the above chord shapes are moveable, which means you can shift them up the fretboard to find other minor chords.

To play a seventh chord in Open E tuning, simply start with the Major chord shape and raise the second string by three frets as shown below:

If you remember this pattern, you can easily change any Major chord in a chord progression to a seventh chord as you like.

You can see that we get Gsus4 if we take the Esus4 shape and move it up to the third fret. Practice moving these two shapes up the fretboard to find other sus4 and sus2 positions.

Here are some other easy chord shapes for Open E Tuning. Try coming up with chord progressions using a combination of the below chords and the chords covered above. 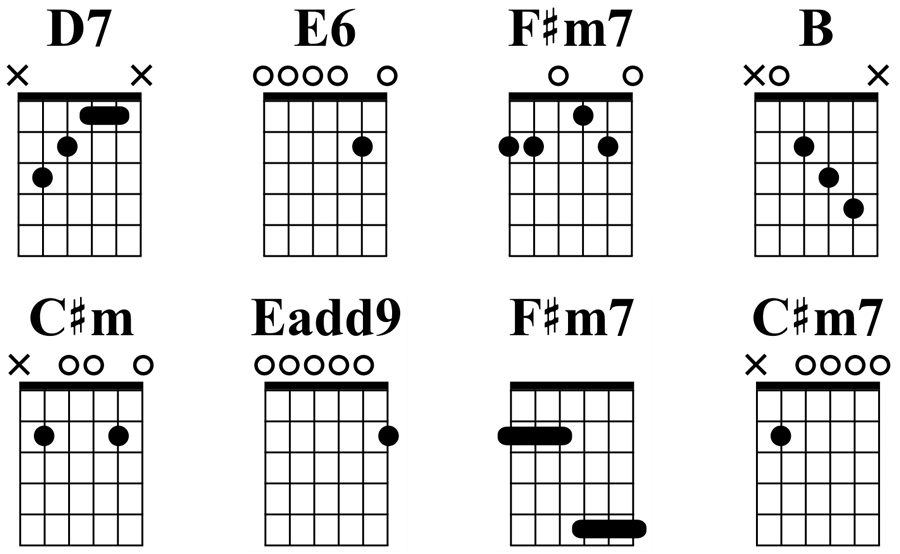 There are more chord shapes you can use in Open E Tuning, but the above chords give you a good starting point. Some of the above shapes are moveable, so experiment with moving them around the fretboard.

If you take the time to memorize the note positions on the fretboard, you’ll be able to come up with more chord shapes.

Here is a printable PDF with all of the above chord shapes in Open E Tuning.

For more downloads and updates, subscribe to email updates here.

Thank you to all my subscribers for supporting Guitar Gear Finder so I can write helpful guides like this one. If you found this guide helpful, please share it on social media to help spread the word.

If you enjoy strumming chords in Open E Tuning, learning the note positions on the fretboard will allow you to also start playing licks and riffs.

Here are the notes of the C Major scale in Open E Tuning:

One of the best things about Open E Tuning is that three of the strings are identical to what they are in Standard Tuning. This means if you have already memorized the fretboard in Standard Tuning, you already know the positions for five out of six strings.

The only string you will need to re-learn is the G# string. Even that is easy to learn as you simply need to shift everything up by one fret in your mind compared to the G string in Standard Tuning.

While the above diagram may look confusing at first, it will quickly become clear how easy Open E Tuning is to memorize.

The above diagram of the C Major scale is a good starting point to get used to the tuning. But a better scale to learn is the E Major scale because that’s what the tuning is based on.

Here is the E Major scale in Open E Tuning:

A lot of songs that use Open E Tuning are in the key of E, so it’s worth spending some time memorizing this scale.

There are plenty of great songs in Open E Tuning you might want to learn to get an idea of what open tunings allow you to play.

Tune your guitar to Open E Tuning and try out the below songs. I have a list of more songs after the first couple of examples.

Gimme Shelter by The Rolling Stones

The intro rhythm part as shown in the below Guitar TAB shows how this tuning forces you to rethink simple riffs and chord shapes.

This song is in the key of E (shown by the four sharp signs in the key signature above), so if you want to learn this song, take some time memorizing the E Major scale diagram as shown earlier.

Once you learn the E Major scale, the chords and shapes Keith plays in this song will make far more sense.

The chorus as shown in the below Guitar TAB shows how simple chord shapes can be used in Open E Tuning:

Notice in the fourth bar how Keith rapidly changes between the open strings and the fifth fret chords. This sounds great thanks to the tuning and wouldn’t be possible in Standard Tuning.

If you haven’t learned barre chords yet, this song will give you great practice at flattening your index finger across the strings. You can see that he doesn’t play across all six strings, so these chords are easier to play than typical barre chord shapes.

She Talks to Angels by Black Crowes

This song does a great job at showcasing the unique chord progressions you can come up with in Open E Tuning. Many of the chord shapes used make use of a lot of open strings, so you end up with a very big sound on an acoustic guitar.

The below chord progression from later in the song shows some unique chord shapes you might want to play around with:

The last bar ends with some harmonics, which sound fantastic in open tunings. You can play full chords using natural harmonics in Open E Tuning.

Here are some songs in Open E Tuning:

Another thing to keep in mind is that a lot of guitarists will tune their guitars to Open D Tuning, then place a capo on the second fret to get Open E tuning.

So if you see any song in Open D Tuning with a capo on the second fret, you can play that song in Open E Tuning instead and it will sound the same.

To learn about other alternate tunings, check out my Ultimate Guide to Alternate Tunings here.

Here are some other open tunings to try out:

I’ll be creating more useful resources like this guide over time. Subscribe for email updates to be notified of new guides and resources.