Drop B tuning is an incredibly popular tuning for guitarists who want a low, heavy, or aggressive tone.

If you have played in Drop D Tuning before (check out my Drop D resource guide here), Drop B will feel the same to play, only with a lower sound.

Drop B is also a handy tuning for guitarists who want to play some songs originally meant for 7 string guitars.

Check out my Guide to Alternate Tunings for more drop tunings you might want to try out.

Check out Drop C Tuning for a very similar tuning as well as some great songs to learn.

How to Tune Your Guitar in Drop B Tuning

Drop B tuning changes the tuning of all six strings and tunes them all down quite low.

To tune your guitar in Drop B, you need to tune all six strings down one-and-a-half steps in pitch, then tune the low string another whole step down to B.

You tune the low E string initially down to C#, the A string down to F#, D down to B, G down to E, B down to G#, then high E down to C#. This gives you C# standard tuning. Now to change to Drop B, you lower the low C# string down to B.

You will end up with your guitar strings tuned to B F# B E G# C#.

Here is a diagram showing what each string is tuned to in Drop B tuning: 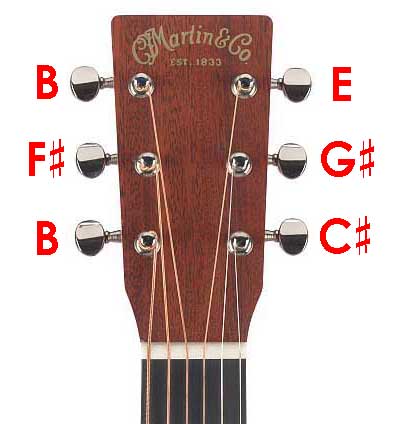 I recommend learning more about Drop D Tuning in this guide so you can see how similar it is to Drop B Tuning. The main difference is that Drop B Tuning is quite lower in pitch. But chord shapes and scale patterns feel the same on both tunings.

What Strings to Use for Drop B Tuning

Drop B Tuning tunes all six strings down quite far compared to Standard Tuning. If you tune a guitar in Standard down to Drop B, you might notice your strings become loose and sloppy to play.

Trying to play a fast or aggressive song with low string tension can make it awkward and sound terrible.

If you want to tune down to Drop B Tuning, you might want to switch to a heavier set of strings.

There is no best string gauge to use in Drop B Tuning as every guitarist has different preferences. You will likely want to use at least 10-gauge strings to prevent the strings from becoming too slack.

Some guitarists use 10-46 gauge strings, while other guitarists prefer 12-53 or heavier to keep tight tension across the bottom strings.

The string gauge that feels best for you also depends on your guitar’s scale length as explained in this guide.

Learn all about string tension and string gauges in this guide.

Open Chords in Drop B Tuning

Here are some basic open chords using chord shapes you might already be familiar with.

Notice that the chord for ‘B’ includes the low B string. You might recognize this chord as D in Standard Tuning. One advantage of playing in a Drop tuning is that you can slightly change some chords and make great use of the lower three strings. The best example of this in Drop B Tuning is with the chords B, Bm or any other variation with B as a root.

Power Chords in Drop B Tuning

Power chords are simple to play in Drop B Tuning and you will find a lot of songs use them.

If you know how to play power chords in Drop D Tuning, this will feel easy. All you need to do is get used to the notes on the low B string and you can easily figure out the position of any power chord.

Simply flatten a finger across the lower three strings to play a power chord in Drop B Tuning. Some songs might only play the lowest two strings, while other songs will play three strings. Both are fine to use as power chords.

Study the fretboard diagram below to get used to the note positions and find any power chord you want.

Drop B Tuning Scales and Fretboard

The below diagram shows the notes on the fretboard in Drop B Tuning.

Here are some tips to help you get the most out of this diagram:

B minor Scale in Drop B Tuning

One of the most common scales you’ll see used in Drop B songs is the B minor scale.

If you already know a few songs in Drop B, compare the notes and chords from those songs to the above diagram. Even if the song doesn’t perfectly match these notes, you’re likely to find that a lot of songs do closely follow this scale.

Learn more about the B minor scale in this guide on the D Major scale (both scales use the same notes).

B Major Scale in Drop B Tuning

While bands that use Drop B Tuning tend to use the B minor scale more, it’s worth learning the B Major scale as well.

If you’re writing a power-chord or riff-based song and feel a bit stuck using the B minor scale, try writing your parts using the notes in the B Major scale instead.

Many guitarists mistakenly think that minor scales are for heavy music and Major scales are only for upbeat music. If you experiment with both scales, you’ll quickly learn this isn’t true at all.

Learn more about the B Major scale in this guide.

There are a lot of bands that make great use of Drop B Tuning. The low B string gives 6-string guitarists the same low pitches normally only available to 7 string guitarists.

Here are some popular examples of songs in Drop B Tuning you might want to try out.

Most of Slipknot’s songs are in Drop B Tuning. There are a few songs in other tuning such as Drop A, but the majority use Drop B.

The below Guitar TAB shows both guitarists’ parts in the intro riff of Nero Forte.

Try learning both parts and play each one along with the song to hear how changing a few of the notes to the upper B string changes the feel of the riff.

The song is played at 129 bpm, so work up to tempo using a metronome if you have trouble playing the palm-muted notes with a tight rhythm.

Here are some other Slipknot songs in Drop B worth checking out:

Drop B Tuning plays a big role in helping the simple riffs in Carrion achieve a massive sound.

The song opens with a lightly drive tone before cranking up the gain for the below riff.

Try playing this riff in Drop D, then play it in Drop B to hear how the lower tuning completely changes the feel of the riff.

Pray for Plagues by Bring Me the Horizon

At around 224 bpm (the song changes tempo throughout), this Drop B song will give you plenty of practice for your picking accuracy and stamina.

There are some fun arpeggios later on in the song, so once you get through the rhythm parts, check it out for something a bit different.

The Ballad of John Henry by Joe Bonamassa

I wanted to include this song to show that Drop B can be used in styles of music other than the styles covered above.

While Drop B doesn’t guarantee that a song will sound heavy, the low tuning definitely helps. This song’s slow and heavy riff wouldn’t sound the same in a higher tuning such as Standard or Drop D.

This part is played at 72 bpm, so focus on making each note sound as heavy as possible. This is done by thinking about which notes to emphasize and which notes to play staccato.

Don’t overdo the gain as too much gain can turn a heavy riff into a mushy riff.

For more songs in lower tunings you might want to try out, check out this guide to Drop C Tuning.

If you want to explore different types of tunings, check out this guide to Alternate Tunings for plenty of options.