Drop C tuning is one of the most popular alternate tunings for guitar. It’s the fourth most common tuning on Guitar TAB found on Ultimate Guitar.

If you have played in Drop D Tuning before (check out my Drop D resource guide here), Drop C will feel completely natural to you. Drop C tuning is a great way to explore a lower tuning and it teaches you how tuning down can completely change the feeling of the music you play.

Any guitar tuner can be used to tune your guitar in Drop C. If you don’t have a tuner, check out this guide on the Best Guitar Tuners to find one that suits you.

After you read through this guide, check out my Guide to Alternate Tunings to see what other tunings you might want to play around with.

How to Tune Your Guitar in Drop C

Tuning your guitar in Drop C requires you to change the tuning of all six strings.

To tune your guitar in Drop C, start by tuning all six strings down a whole step or two frets in pitch. You tune the low E down to D, the A string down to G, D down to C, G down to F, B down to A, then high E down to D. This gives you D standard tuning. Now to change to Drop C, you lower the low D string down to C.

You will end up with your guitar strings tuned to C G C F A D.

Here is a diagram showing what each string is tuned to in Drop C tuning: 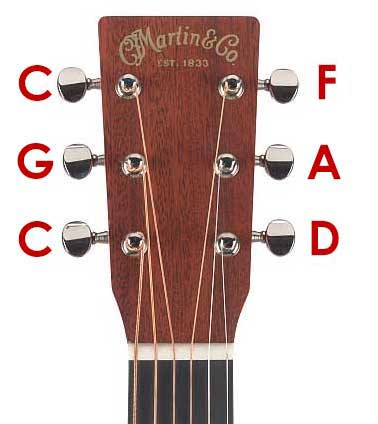 The easy way to remember Drop C tuning is to think of it in the same way you think about Drop D tuning.

In Drop D, you start with Standard Tuning and drop the low E string down to D.

In Drop C, you start with D Standard Tuning and drop the low D string down to C.

In other words, Drop C tuning is a whole step (two frets worth of pitch) down from Drop D tuning. If you haven’t heard of ‘whole step’ before, read my lesson on intervals to understand what this means.

The great thing about Drop C tuning is that all the chord shapes you know from Drop D tuning stay the same. The only thing that changes is the name of each chord. For example, the E Major chord shape becomes D Major in Drop C tuning. The A minor chord shape is now G minor.

With any chord shape you know from Drop D tuning, simply lower the chord name by a whole step.

Here are some examples of chord shapes you know from Standard Tuning and what they are called in Drop C tuning:

The first chord you might recognize as the C Major shape. You can use the same chord shape, but the chord now becomes A# (or Bb) Major in Drop C Tuning.

It might take a while to get used to the new names, but the advantage is that you probably already know these chord shapes.

If a chord uses the sixth string, it will be different in Drop C tuning. Here are some new chords to learn for Drop C tuning:

A lot of songs in Drop C focus on chords based on C, so it’s worth the effort to memorize these chords.

Here is how you play power chords in Drop C Tuning: 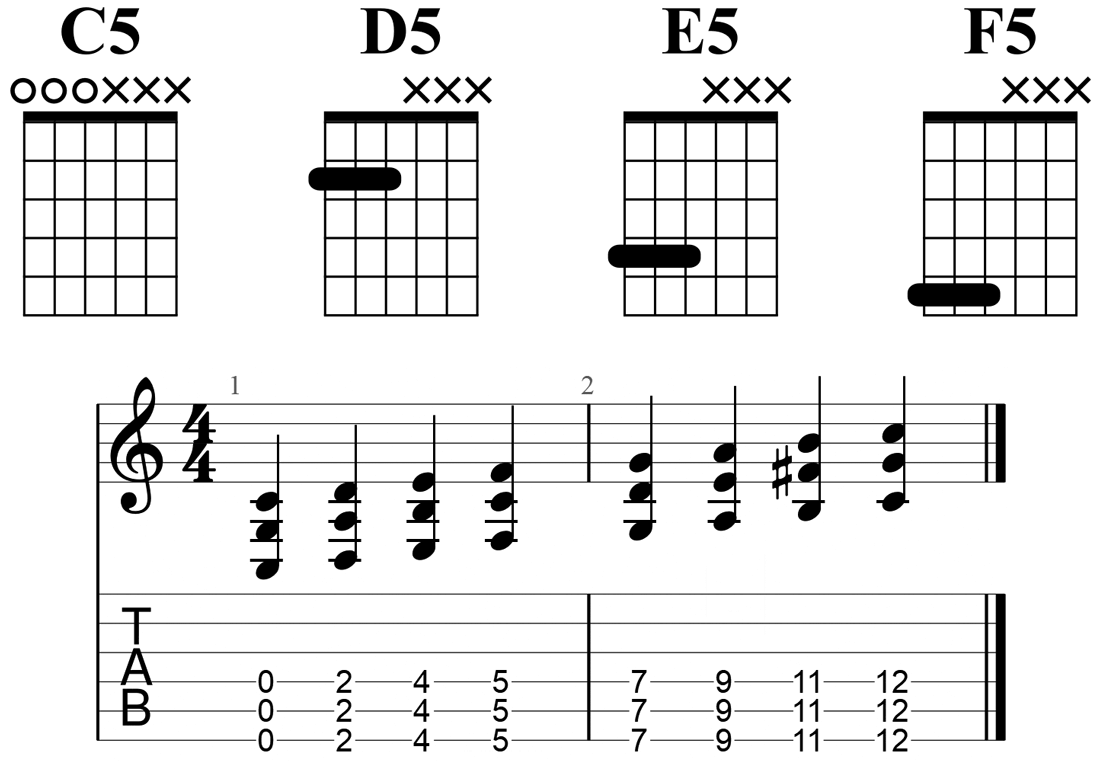 If you know how to play power chords in Drop D tuning, this will feel exactly the same.

Power chords are played as normal on all other strings, but when they start on the sixth string, you only need one finger to play them.

As you will see in the Guitar TAB for songs later on, this lets you jump around the fretboard and play fast-moving power chords.

Metal guitarists (and guitarists in typically heavy styles of music) commonly use Drop C tuning simply because of how different power chords feel to play.

It takes a bit of time to get used to scales in Drop C tuning because all six strings have shifted in pitch.

Here are the notes of the fretboard in Drop C Tuning:

I highlighted the C positions as you will likely want to focus on those notes when writing riffs.

You may also notice if you look across the second fret notes that those notes match what you tune your guitar to for Drop D tuning.

Another reason you might want to memorize the above note positions is that the C Major scale is commonly used in Drop C tuning. You may find that a lot of Drop C songs use this scale.

Some scales will be used more often in Drop C tuning to take advantage of the low open C string. C minor is a very common scale you will see used in many songs in Drop C tuning.

Here is the C minor scale in Drop C Tuning:

C minor is a popular scale when writing songs in Drop C Tuning because it makes great use of the low open C string. Minor scales are also the go-to choice for metal and heavier-sounding music, so you’ll find a lot of songs in C minor.

Drop C Tuning is the third most popular alternate tuning and according to TAB listings on Ultimate Guitar, there are over 19,000 TABs available in Drop C tuning. You can find songs written in Drop C tuning in so many different styles of music, but it is most common in metal and similar heavy-sounding styles of music.

While most of the songs I’ll show below are in heavier styles of music, Drop C is still popular in other styles. There are a lot of artists who have used Drop C

Here are a few good examples of how to use Drop C tuning.

Chop Suey by System of a Down

System of a Down uses Drop C tuning as their go-to tuning. Drop C allows them to play fast power-chord based riffs that jump around the fretboard. Many beginners learn to play their music in Drop D tuning, but you get the full effect when you tune down to Drop C.

The main riff to Chop Suey is a great example of why Drop C is a great tuning when you want to jump around using power chords. Trying to play this riff in Standard Tuning would feel and sound awkward.

Look at the way the guitarist jumps back and forth between the power chords in this riff. At 272 bpm, Drop C tuning makes this riff much easier to play.

I suggest checking out System of a Down’s music if you want to get an idea of the type of riffs you can play in Drop C tuning.

Here are some other System of a Down songs worth checking out that are great examples of why Drop C tuning is fun to play:

Keep in mind that almost all System of a Down songs (as far as I know) use Drop C, but the above songs are a good starting point.

Hearts Burst Into Fire by Bullet For My Valentine

This song is a good example of using power chords and full chord shapes in Drop C tuning to create a heavy sound.

The intro riff also shows how Drop C tuning can completely change the feel of simple clean arpeggios. Compare playing this riff in Drop C tuning and Drop D tuning and you’ll see why so many guitarists like to tune down.

This song uses the C minor scale and it uses some interesting chord shapes you might want to learn.

My Curse by Killswitch Engage

The intro to My Curse is a great example of how you can create some big-sounding chords in Drop C Tuning:

Some of these chords would be unplayable or extremely awkward in Standard Tuning.

There’s a nice variety of arpeggio and chord-based riffs in Oblivion that make great use of the tuning.

Check out the chords used in this chorus section for an example of interesting things you can do in Drop C tuning:

Mastodon tend to alternate between D Standard, Drop C, and Drop A tuning, so check out their songs for more examples of this tuning in action.

Here are some other songs, albums, and bands to check out in Drop C Tuning:

If you like playing in Drop C tuning, check out my Ultimate Guide to Alternate Guitar Tunings for other tunings you might want to try out.