Table of Contents show
1 Features
2 Ease of use
3 Sound
4 Reliability/Quality
5 Overall impression
6 Pros
7 Cons
8 Who is it for?
9 Who isn’t it for?
10 How to get the most out of it
11 Alternatives 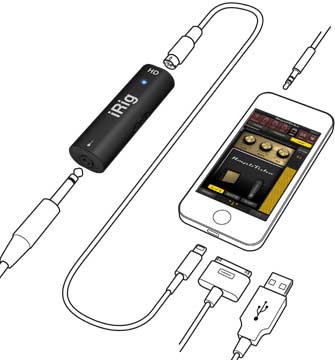 Here are the main features the iRig HD offers:

The original iRig connected to the headphone jack on the iPhone while the HD version connects using either the Lightning or 30-pin connector. The main advantage to this approach is that it provides a digital signal. Plugging a guitar into the original iRig is just like plugging your guitar into your PC/Mac’s microphone input – no matter what you do, it will sound horrible. With the HD it now connects digitally so the iRig can now include a proper preamp and offer far superior quality. This is why three cables are given along with the iRig – due to the fact that older iOS devices use a 30-pin connector while newer devices use the Lightning connector. The USB connector allows you to connect the iRig to a Mac. So no matter what iOS device you have, the iRig HD will work with it.

It can’t get any simpler: connect the appropriate adapter to the iRig (eg: Lightning), then plug your guitar into it. You simply choose the adapter that suits your device (eg: older devices such as the iPad 2 would use the 30-pin connector while the newer devices would use the Lightning connector). Unlike the original iRig the leads on the HD are nice and long so you won’t have your iRig sitting awkwardly close to your iOS device. There is a gain control on the iRig to adjust the preamp, but that’s it. Of course, simply plugging the iRig HD to your iOS device isn’t enough – you need to use it with relevant apps. The most obvious app to start with is IK Multimedia’s AmpliTube. There is a free version available on the App Store that gives you some basics with in-app purchases for other effects.

The aspect I like the best about the iRig HD is that you can use it with any app that uses an input. So any music related apps you have you can use your iRig HD. Here are a few suggestions to check out:

Now at this point, I want to note that while the iRig HD wasn’t designed for PC use, it is possible to use it with your PC. To do this you need to install a third party driver called ASIO4ALL. Because the iRig doesn’t have an inbuilt output, you need the ASIO4ALL driver so you can select a different output. So connect the iRig HD to your PC, then when loading your DAW or software such as AmpliTube or Guitar Rig, choose the ASIO4ALL driver. Load up the settings and select the iRig for the input and your soundcard for your output. Now the DAW or software will take your iRig’s input, and direct it to your soundcard’s output. Very useful if you don’t have a dedicated audio interface.

The iRig HD is light-years away from the horrible quality of the iRig. While the original iRig was noisy the HD is nice and quiet as it should be. This means when you load up an app such as AmpliTube, the quality of the effects and amp modelling is significantly raised. When I used the original iRig I had to add a Noise Filter effect (as seen in the image below) to my signal chain to try to overcome the noise thanks to the iRig. Now, I can remove that effect which frees up space for something more useful. So basically the iRig HD is very transparent so you can use your apps without worrying about noise.

If you have the iRig HD, be aware that IK Multimedia released a firmware update which bumped the sample rate up to 96kHz. So I highly recommend updating the firmware to get the best quality audio. 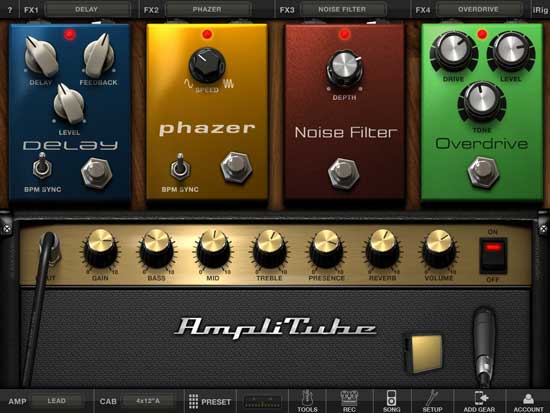 Keep in mind there are plenty of guitar related apps available so you don’t have to use AmpliTube. Some apps sound better than AmpliTube and others don’t – the point here is that the quality of the actual iRig unit is high enough that you will be able to get the most out of any app you use which is something I can’t say with the original iRig.

The iRig HD feels heavier and better built compared to the original iRig. The quality is far superior in essentially every way. What I like about this design is that the actual unit doesn’t connect directly into the iOS device like the Line 6 Mobile In. Having a short lead to connect to the iRig gives you more flexibility when you use your device. It also means you’re less likely to damage the unit.

If you want a quick and easy way to connect your guitar to your iOS device, then the iRig HD is a great option at a good price. The quality is far superior to the original iRig which means it is much more useful. The fact that you can use it with pretty much any app means you are free to use your guitar with your iOS device now and in the future, as more apps are created. I recommend the iRig HD if you regularly use an iPad or iPhone because there are so many good quality apps available that work well with the iRig. The only time I would suggest getting a different type of device (mentioned later) is if you need the flexibility to connect a microphone or MIDI device as well. Keep in mind the iRig also allows level line input from other instruments such as keyboards so it’s not just for guitar.

iOS device owners – have a look at the App Store and you will see a huge number of guitar related apps. A few were mentioned earlier and there are new apps coming out all the time. You can now realistically use your iPad to produce high-quality multitrack recordings with a few simple apps. The iRig HD is a good entry point that allows you to make the most out of all the apps available. It’s relatively cheap and has great sound quality.

Guitarists wanting flexibility – if you mainly play acoustic guitar or sing as well, you might want to look at one of the alternatives such as the iRig PRO that offers microphone input or MIDI input. Some devices even allow multiple inputs at the same time so don’t feel that this is the only option you have. I recommend the iRig HD as a starting point so you can get a feel for the quality of apps available. Then you can decide whether you want to invest in more expensive devices that allow more flexibility with inputs.

While the iRig was designed to use with the AmpliTube range of apps, they aren’t your only options. While the apps are free to download, most of the effects and amp models cost money as in-app purchases. So instead of starting off by spending money in the AmpliTube apps, check out other apps. There are a few free options and other paid options that offer very similar options as the AmpliTube apps. Don’t just stick to these type of apps, check out other types of apps such as multitrack recorders or jamming apps. Apps like Garageband or Jammit allow you to make the most of the iPad and either write or jam along with songs. So don’t just stick to modelling apps or you’ll miss out on what other apps offer.

Update: since the iRig HD 2 is now available and it provides the same audio quality along with more features, I highly recommend reading my review of the iRig HD 2 before deciding on a device.

At this point, there are a good number of iOS based guitar input devices. While the iRig HD is good, it may not be the best for your situation. For example what if you also want microphone input or MIDI input? What if you want multiple inputs to turn your iOS device into a fully fledged recording studio? Check out my guide on recording at home for some examples of more powerful audio interfaces that might suit you better than the iRig HD 2.