The iRig Mic Studio is designed to be a portable, studio-quality microphone you can use across different devices on the go or at home. For a guitarist, this means you can record electric or acoustic guitar along with other instruments any time you want. If you play both electric and acoustic guitar, acoustic only or you also sing, read through this review to see if the iRig Mic Studio is right for you. 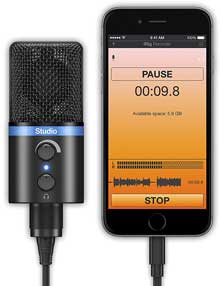 Here are the main features of the iRig Mic Studio worth mentioning (check out the full features and price here):

The package contains the following items:

The iRig Mic Studio is designed to be portable and easy to use. The idea is that you can use it to make high quality recordings on any compatible device, whenever you need to. The big test was to see how quickly I could get it up and running on the first go.

I have an iPad 2, which requires the older 30-pin cable, so I wasn’t able to test it on that. You can buy a 30-pin cable separately from the IK Multimedia website, so it is compatible – just not out of the box. A Lightning cable is included so I had to test it out on my wife’s iPad Mini. I set up the microphone on it’s tripod, connected to the iPad and loaded up AmpliTube.

As you would hope, it worked immediately. Adjust the headphone volume knob and the gain knob and it produced a nice crisp recording. This is exactly what you should expect or hope with iOS – a no hassle setup.

There are plenty of compatible apps available for iOS. I tried a number of them out and all seemed to work perfectly fine. IK Multimedia apps like VocaLive, iRig Recorder and Mic Room will definitely work. Other apps will work if they are Core Audio compatible.

It’s also important to mention that the integrated headphones output means the iRig Mic Studio is compatible with iPhone 7. Any future iOS devices without a 3.5mm headphone output will be compatible with this mic.

For example, the Samsung Galaxy S5 originally shipped with Android 4.4.2. If you try and run the S5 with that version of Android, it won’t work with the iRig Mic Studio. But if you update your software, the S5 is compatible.

Unfortunately my Galaxy S6 took too many falls so I’m back in the dark ages until I get a replacement. So while I couldn’t test the iRig Mic Studio on an Android device, other reviews do show that it works perfectly fine if you use the right version of Android.

The typical way to record a microphone to PC (or Mac) is to connect a traditional microphone to an audio interface which connects to your PC. I used to do podcasting (not guitar related) and hated having to set up my microphone and audio interface. In reality it didn’t take much time, but it quickly became annoying. 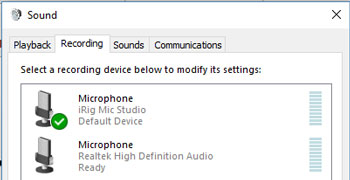 I plugged it into my Windows 10 PC and in less than 10 seconds the drivers were up and running automatically and ‘iRig Mic Studio’ appeared in my recording devices list as shown to the right.

I loaded up Studio One (my preferred DAW) and selected ASIO4ALL as my device manager which I highly recommend. My typical setup is to use my PC’s output to my monitors or heaphones rather than use an audio interface’s output. So I set those options in ASIO4ALL, hit the monitor button and could instantly hear the mic’s output.

It’s hard to emphasize how happy I was to have this working so smoothly. I’ve had so much trouble with USB microphones in the past as well as some audio interfaces, so it was great for it to just work as it should. Tested both 44.1kHz and 48kHz and both worked fine.

I’ve read that some people have had trouble getting the mic’s headphone output to work with various DAWs, so I switched to use the mic’s output in ASIO4ALL. At first it didn’t work and gave the same error I usually see with other devices. I assume this is the same problem other people encountered. To solve this problem, I checked the ‘Always Resample 44.1kHz <-> 48kHz’ option in ASIO4ALL:

There are a couple of features I feel make this quite an easy unit to use. The first is the LED indicator. I talked about this in my review of the iRig HD 2. Instead of having an LED only light up when the input is clipping, this LED is multicolored. Blue for low level, green for good, orange for high and red for clipping.

It might not sound like much, but it’s so handy to instantly know how good your level is. Compared to the yes/no for clipping on other devices, this is fantastic.

For a portable unit, it means quicker setup time. If you want to get hit with inspiration and want to record, little things like this make life easier. You simply check the LED and adjust the gain until you’re consistently getting a green LED.

The other handy feature out of the box is the tripod and 1.5m/59″ USB cable. While the clamp has a standard microphone thread so you can mount the iRig Mic Studio to any stand, it’s really handy to have the tripod. You can record your acoustic guitar at any table or desk without needing to set up mic stands. Again this is a plus for the unit’s portability.

I never liked handheld units or units that mounts directly into the iOS device. A small tripod with a long cable gives you so much more flexibility.

Before I talk about the iRig Mic Studio’s audio quality, I need to cover some basics about what ‘audio quality’ means.

There will be people out there who will listen to recordings done with the iRig Mic Studio and say that it’s not as good as X microphone. Likewise, there’s a review on Amazon claiming that mic in the iPhone 6S is just as good as this. The problem with reviewing a microphone’s quality is that audio quality a very subjective topic. 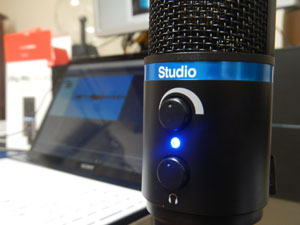 The environment you record in also plays a massive role in perceived audio quality. A $5000 mic will sound rubbish if there’s ambient background noise. A cheap microphone can sound great when used in a sound booth by an experienced sound engineer.

The point I’m trying to make is that whenever you hear somebody make a claim about a microphone’s audio quality, you also need to consider the person reviewing the mic, the environment and their experience. I need to explain this because you will see some people claiming it doesn’t give good quality recordings. The person who can’t tell the difference between their iPhone’s inbuilt mic and this mic doesn’t understand microphones.

The iRig Mic Studio is a high-quality device. The large 1″ condenser capsule produces great detail in recordings with a good noise floor. It’s one of the better microphones I’ve used in and out of the studio. When I use the microphone in my home studio, it produces a crisp recording.

From a technical point of view, the microphone is more than good enough for home recordings. Whether you can produce excellent sounding recordings depends mainly on the environment you record in. If you record in a room with a computer fan humming in the background, your recordings won’t sound great.

But if you record in the right environment, you’re going to achieve amazing sound quality.

The iRig Mic Studio’s portability means you can record in the best possible environments without being tethered to a PC. The bottom line is that you won’t need a more expensive microphone to get higher quality recordings. The iRig Mic Studio is high enough. 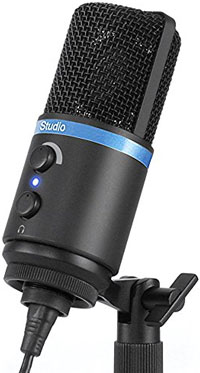 For the iRig Mic Studio’s price, it really feels and sounds like a studio quality device. I was surprised by the weight and quality of the build when I first picked it up. It’s reassuringly heavy and solid and just like a typical studio microphone.

The weight of the mic also means it’s very stable on its tripod or when mounted to a microphone stand. So you’re not going to feel like it’s going to fall over like some of the cheaper USB microphones out there.

For the price, the iRig Mic Studio is an excellent microphone for guitarists wanting to get into recording. It’s a nice portable unit with a studio quality build. The fact that you can use it with a range of devices means you are free to record your music how you want to.

My overall feeling on the iRig Mic Studio is that it’s a great microphone that doesn’t require other devices such as an audio interface to use. You’re not tied to one type of device so if you’re looking for a way to record on the go or you want to use the one microphone in different situations, I recommend this one. So if you’re looking for a portable and easy to use microphone, I recommend the iRig Mic Studio.

Finally, if you’re going to be recording more than just electric guitar, the iRig Mic Studio will suit your needs. It can even handle drums as it’s rated to 133dB SPL. So it’s a good way to capture ideas and performances without needing a range of different microphones.

Check out the price and full details of the iRig Mic Studio here.

Who is the iRig Mic Studio for?

Guitarists wanting portability: the big advantage the iRig Mic Studio has over traditional microphones is that you don’t need an audio interface and it’s completely portable. If you a compatible smartphone or tablet, it’s handy to have a studio quality microphone with you.

Simple home recording: I now prefer using the iRig Mic Studio when I record vocals or acoustic guitar instead of my old setup. Being able to simply plug the iRig in my PC and position it where I want just makes life easy. If you need to record multiple mics at the same time, then you’re going to want an audio interface with multiple inputs. Otherwise, this is a very easy to use option.

Who isn’t the iRig Mic Studio for?

How to get the most out of the iRig Mic Studio

If you’re just getting into recording, check out my Beginner’s Guide to Recording Guitar at Home. It covers all the major aspects of setting up a home recording studio. I’ll be writing more guides related to recording guitar at home, so be sure to subscribe to email updates.

Alternatives to the iRig Mic Studio

There are plenty of microphones on the market with a wide range of prices. The closest alternative to the iRig Mic Studio is the Apogee MiC:

The Apogee MiC (link to price and full details on Amazon) offers a very similar unit with similar features. The main difference is that the Apogee MiC offers up to 96kHz compared to the iRig’s 48kHz. It’s not compatible with any Android devices and iOS devices aren’t compatible out of the box. The unit does cost quite a bit more. Whether you should choose the iRig Mic Studio or the Apogee MiC 96k depends mainly on what devices you use and your budget.

It’s also worth mentioning that while the Apogee MiC does offer a higher sampling rate, that does mean recordings take up twice the storage space. So if you plan on using your smartphone for recordings, consider your device’s storage capacity.

Note: be aware there are two versions of the Apogee MiC 96k. One is only compatible on iOS devices & Mac, while the other is a PC/Mac version requiring you to purchase extra cables for iOS compatibility. The reason I recommend the iRig Mic Studio is because it is compatible with all devices.

See information on pricing, availability and other reviews on the iRig Mic Studio here.