The Ionian mode is an important starting point when learning about modes on guitar. Before you learn other modes, learn the basic music theory behind the Ionian mode in this guide.

Modes can give your guitar playing new sounds and dramatically change your music’s feel and quality when used properly.

This guide will look at:

After reading this guide, read this guide to learn how to practice modes and scales.

What is the Ionian Mode

The reason the Ionian mode is a good mode to learn first is that it will help you understand the rest of the modes.

The Ionian mode gives you a reference point you can use to compare against all the other modes. When you play Ionian then compare it to another mode such as Lydian or Dorian, the unique qualities of those other modes stand out.

Guitarists don’t tend to play using Ionian mode as most simply think more in terms of using the Major scale. Playing by thinking about modes can be very different than thinking about the Major Scale, despite the fact that they use the same notes.

If you feel confused with the Ionian mode, it will begin to make sense when you start comparing it to other modes. So don’t give up yet.

Every scale and mode can be built using a formula. Scale or mode formulas give you a quick and easy way to compare and learn modes.

Here’s a diagram showing all seven modes compared to the Major Scale: 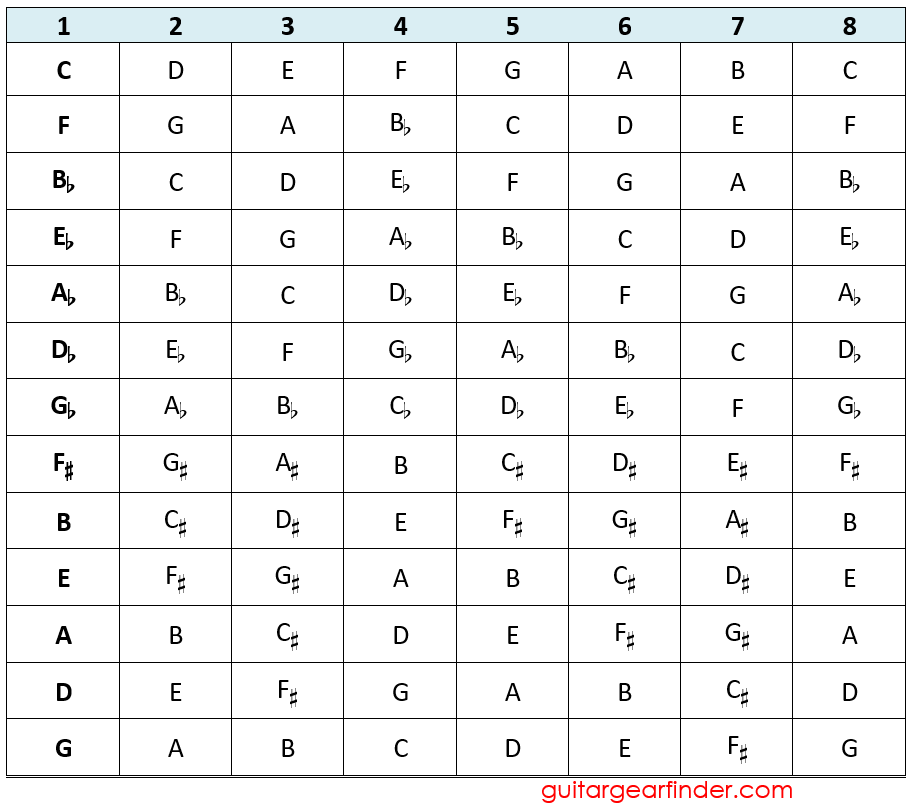 The bold notes in the far left column are the root notes for each mode.

For example, the G in the bottom row is for G Ionian. G Ionian uses the notes: G A B C D E F#

What makes the Ionian mode easy to learn is that this chart is identical to the chart for Major Scales. G Ionian uses the same notes as G Major.

I recommend spending time memorizing at least a few of the more common Major Scales (eg: C, D, A, E, G Major scales) because you’ll use them all the time as a guitarist.

How to Find The Notes in Ionian

There are three useful ways to find the notes in any mode. I’ll go through each method and you can decide which ones you want to use.

The fact that there are many different ways to explain and build modes is why there is often so much confusion over modes. Different books and videos will use different methods, which can confuse guitarists learning modes for the first time.

Finding the notes in Ionian is easy because they’re the same notes as the Major scale, but let’s go through the three methods so you can use those methods later on when learning other modes. The more comfortable you feel with these methods, the easier it will be when you move on to other modes.

Method 1: Use the Mode Formula

The first method to figure out the notes in any mode is to use the mode formula.

To use this formula, pick a root note for the mode you want to figure out.

Here are the steps to using the mode formula to find the notes in any mode:

Let’s go through these steps with a couple of examples to show how easy it is for the Ionian Mode. But the same above steps apply when learning other modes.

Let’s say you want to figure out the notes for C Ionian.

The root note (the first note) for C Ionian is C. This means to use the mode formula, we need to start with the notes in the C Major Scale. You simply find the scale that matches the starting note C.

Here are the notes of the C Major Scale:

If we were learning a different type of mode such as Dorian or Phrygian, we would then change these notes based on the mode formula.

The root note (the first note) for A Ionian is A. This means to use the mode formula, we need to start with the notes in the A Major Scale.

Here are the notes of the A Major Scale:

Don’t let the sharp notes confuse you, it doesn’t make any difference in how we figure out what the notes are in a mode.

Note: if this explanation seems over-the-top, you’ll understand why I’ve gone into this much detail when you move on to learn other modes. If you can follow the above steps here, the other modes will be much easier to learn.

The second method is to figure out which Major scale matches the mode you want to find.

There are seven modes of the Major scale – one built from every note in the scale.

Note: if the above two methods seem unnecessary, that’s only because Ionian is an easy mode to figure out. These two methods will suddenly become much more useful when you move on to other modes.

The third method is to build the mode using intervals and an interval formula. Don’t worry – this is easier than it sounds!

Intervals are the building blocks of scales as explained in detail in this lesson.

Learning how to build a scale or mode using intervals will help you understand what makes each mode or scale different.

The way you build the Ionian mode using intervals is similar to how we built the mode using the formula covered earlier.

H = half-tone or semitone (one fret on guitar)

To use this formula, you pick the mode you want to build (eg: C Ionian), then follow the formula to figure out the rest of the notes.

Once you learn how to do this, you’ll see that you can easily build any Ionian mode you want without having to know any Major scales.

Here’s a fretboard diagram showing how simple this method is to work out the E Ionian mode:

Here are the steps explained:

Once you memorize the formulas for all seven modes, you can easily find all the notes to any mode without having to look up any scale.

This method might seem like a lot of work at first, but if you have memorized the notes on the fretboard, you’ll find that this is an incredibly quick and easy method to use.

If you are already familiar with Major scales, this chart is easy to remember.

Notice that this scale doesn’t use any of the open strings in Standard Tuning. This makes it an awkward mode to play on guitar so you’ll find that not many guitar-based songs use it.

This mode is another example of an awkward mode to play on guitar. Only two open strings are used, which is very uncommon in guitar-based music.

As you might expect based on the notes in this mode, this isn’t used often in guitar-based music in Standard Tuning. Not being able to use most of the open strings makes this awkward to play on guitar.

The final mode listed here is another rarely used mode for guitar players in Standard Tuning. Only the open G string is used, so this is an awkward mode to play.

How to Use the Ionian Mode

The best way to learn how to use the Ionian mode is to spend time jamming with it over the top of a Major chord.

For example, use a looper pedal to record yourself strumming a C Major chord.

If you’re used to jamming with the Major scale, you might be a bit disappointed with what you hear. You won’t hear anything interesting or different when jamming with Ionian.

But I highly recommend you spend some time listening carefully to the Ionian mode. Once you move on to other modes such as Dorian or Phrygian, the practice you put in with Ionian will make the other modes stand out to your ears.

In other words, spend some time learning the Ionian mode to help you understand the rest of the modes.

Because the Ionian mode is the first mode of the Major scale, it doesn’t pull the listener in interesting directions compared to other modes.

So there aren’t many great examples of songs using the Ionian mode compared to other modes. Most guitarists just think in ‘Major Scale’ instead of thinking in ‘Ionian’.

Here are a couple of songs using the Ionian mode worth checking out:

The key point to remember with modes is that you should compare the melody or riffs against the underlying chords.

For example, in the song Always With Me, Always With You by Joe Satriani, the first section starts off in B Ionian. The lead guitar strictly follows the notes in B Ionian as shown below: 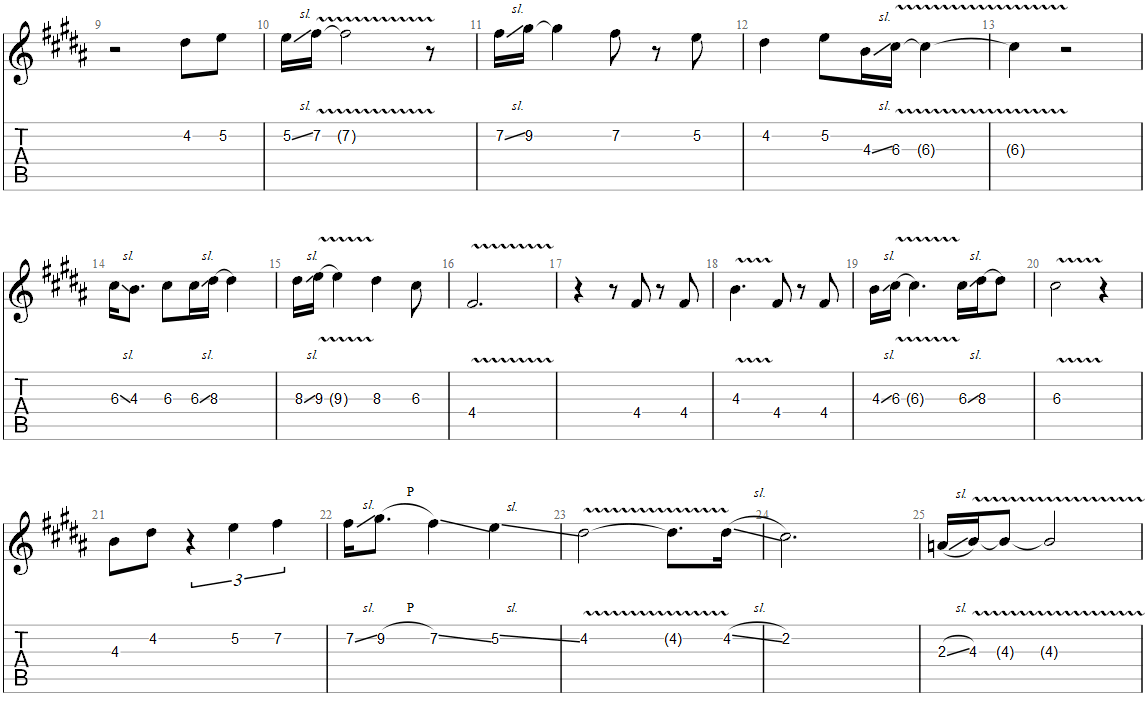 When you look at the chords played in the background (Badd11, Emaj7add13, F#sus4), those chords help bring out the Ionian sound.

Later in the song, there is a change to B Aeolian and you’ll see both the chords and lead guitar parts shift to match the change in mode.

Don’t worry if you still don’t see the fuss about modes yet. When you move on to the next mode, everything will start to make sense.

Here are some common questions you might have about the Ionian mode.

Is Ionian the Same as Major?

What Order Should I Learn Modes?

You can learn modes in any order, but there is an order that makes it easier to learn them fast. The first mode you should learn is Ionian. Next, learn Lydian and Mixolydian. Then learn Dorian, Aeolian, and Phrygian. Learning Locrian is optional because it’s the least used mode.

How Many Guitar Modes Are There?

There are seven guitar modes. The seven modes are in order: Ionian, Dorian, Phrygian, Lydian, Mixolydian, Aeolian, and Locrian.

Here are more useful guides on the modes and practicing them:

How to Memorize the Notes on the Fretboard (Two Methods)
What is Ear Training? Everything You Need to Know
Ultimate List of Guitar Finger Exercises (with TAB)
Ultimate Guide to the Mixolydian Mode on Guitar (Charts & Fretboard Diagrams)
3 Best Ear Training Apps for Guitarists (Updated 2022)
Guitar Scales Explained Simple: FAQ, Charts, TABs