Since Jimi Hendrix wowed the crowd at Woodstock, the Wah has been an essential part of an electric guitarist’s sound. In the past, the wah was usually called a ‘wah wah’ pedal, but people now tend to call it simply a ‘wah’. This lesson will explain how to use a wah pedal and includes exercises and licks you can use to get the most out of your wah pedal. If you do not already have a wah pedal, check out my Ultimate Buyer’s Guide on the Best Wah Pedals. It will help you figure out which is the best wah pedal for you.

How a wah pedal works

Before we look at actual examples, let’s first look at how the wah works. Once you understand how it works, you will find it easier to use. There are two basic positions to remember with a wah:

Open position (heel to the ground):

Closed position (toe to the ground):

In written sheet music, the open position is notated with an ‘O‘ above and the closed position with a ‘+‘. In the examples below, you will know exactly when to rock the pedal back and forth by reading these symbols.

This is the go-to technique commonly used because not only is it fun to play, it’s easy. The idea is to rock the pedal back and forth on every single note you play. You start with the wah in the open position before you play the note, then as soon as you hit the note, you rock the pedal all the way to closed, then all the way back open. So every note will get a ‘wah-haw’ sound.

Here’s a simple exercise to get used to rocking the pedal back and forth on every note: 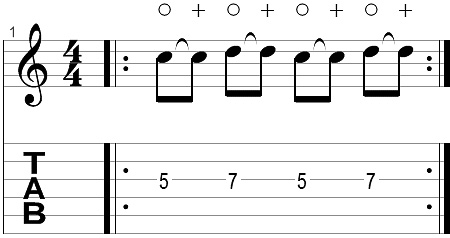 Practice the above exercise until you can consistently play over and over and have a steady beat with the wah.

Here’s a simple lick to see how this technique can be used in a song:

Start very slow and ensure you rock the pedal back and forth smoothly. Once you can consistently play it smoothly, gradually increase the tempo until you reach about 200bpm. By that point the notes will feel very rapid and you will easily hear the ‘wah-wah-wah’ sound. Start with a clean tone then after you master this lick at a high tempo add in some overdrive.

The wah pedal is very common in funky rhythms and although funk rhythm can be tricky, the basic wah technique used is often very simple. With the below exercise you are actually moving the wah pedal exactly like you did in the previous exercise and lick. You will start each beat in the open position, move it to the closed position, then bring it back to the open position in time for the next beat. So the wah will move back and forth every beat regardless of what rhythm you play.

Here’s a simple funk rhythm to get used to rocking the pedal back and forth during the beat:

Start by practicing this exercise without the wah pedal along with a metronome. Play it repeatedly until you have a steady rhythm. Then add the wah pedal and practice smoothly rocking it back and forth every beat as shown. Every time you hit the chord on the 10th fret you should have the wah pedal back in the open position.

Start again with a very clean sound then after you can easily play the exercise, add in some overdrive and a bit of reverb or delay.

The next lick is very similar to what Jimi Hendrix did at the beginning of ‘Voodoo Child (Slight Return)’. The idea is to match your strumming along with the sound of the wah pedal. So when the wah is in the open position, hit the lower strings to get a lower sound. When the wah is in the closed position, hit the higher strings to get a more treble sound. This lick is a great way to really understand how to match your playing with the sound of the wah. The wah pedal is still rocking back and forth every beat so you should find this lick easier than the previous one: 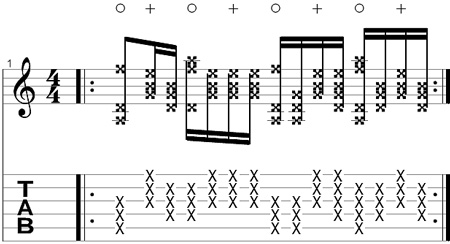 Again, start with a clean sound then add in some overdrive after you can easily play the lick at a steady tempo.

Wah as a filter

Sometimes guitarists will use the wah pedal as a way to give their tone some color. Instead of rocking the wah back and forth, you simply leave it in a certain position (eg: closed). As the wah pedal has a wide range between the open and closed positions, you have plenty of choices on what type of ‘color’ you want to add to your tone.

Play the below riff first with the wah pedal off so you can compare adding the wah as a filter. Play the riff with a clean sound and let the notes ring out. 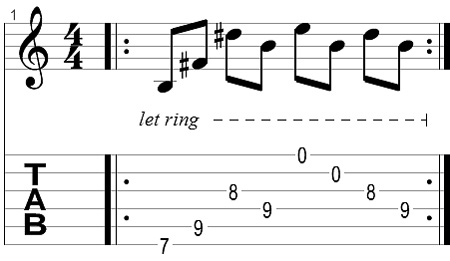 Try playing the riff again with the pedal slightly forward from the open position. You won’t need to change it much for the tone to change. Rock the wah pedal forward again slightly and play the riff again. Continue this until you are all the way at the closed position. You should notice that every time you played the riff it sounded very different due to the wah acting as a filter. By the time you played the riff in the fully closed position, the tone has a very treble sound.

Sometimes guitarists use the wah pedal in the closed position as a way to boost their tone’s top end when playing a solo. Try this next time you play a song with a solo. Simply turn on the wah pedal when you start your solo and leave it in the closed position. It may not sound as exciting as rocking the pedal back and forth, but it can be a useful way to shape your sound.

Another way you can use your wah pedal is by slowly sweeping it back and forth as you play. The slow motion of the wah pedal creates a sweeping sound that gradually changes your tone. This works very well with rhythm parts but can also be used for lead instead of the standard ‘wah-wah-wah’ technique.

You should notice that sweeping the wah slowly back and forth sounds very different to leaving the wah pedal in a stationary position. With this technique you’re still using the wah as a filter, but this time it’s a changing filter.

Using the wah to emphasize notes

Start off by practicing this riff without the wah pedal. Use a decent amount of distortion or overdrive to get a rock/metal sound. Add in the wah pedal and listen to how it highlights the four bends.

A more advanced version of this riff would be to start with the wah pedal switched off, then quickly switch it on at the end of the first bar to be ready for the four bends. Then after the last bend you switch the wah pedal off again. This is very tricky to do but can dramatically change how the riff sounds as the first bar will not be filtered by the wah at all. To hear an example of this, listen to the first riff in the Metallica song Cyanide. You should hear the wah pedal turning on and off and highlighting only a few powerchords.

Tips for Getting the Most Out of a Wah Pedal

Here are a few random tips to help you improve your wah’s tone and to use your pedal effectively:

Keep experimenting with your wah pedal and you will continue to find new ways to use it creatively. 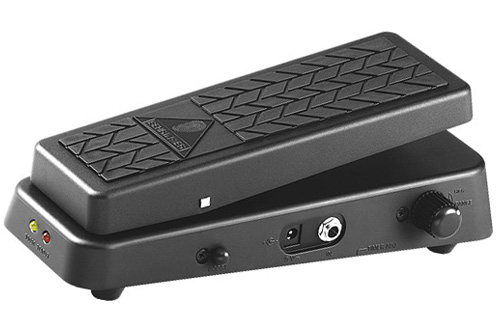 Tips for Purchasing a Wah Pedal

There are so many wah pedals available today with a range of different features and sounds. Some will give you the classic rock tone while others will give you much more. The right wah pedal for you depends on what type of tone you want and how much flexibility you want in that tone.

To find out what wah pedal would suit you, check out my Ultimate Buyer’s Guide to Wah Pedals here. I cover a few very popular options and explain which one may suit you best.

Getting a Better Wah Tone

You’ll be able to get the most out of your wah pedal when you learn how it interacts with other pedals in your rig. In this Guitar Effects Course, you’ll learn exactly how a wah pedal works. You’ll see and hear examples of a wah in action as well as how the position of the wah in your rig changes the tone.

If you want to get the most out of your wah pedal, check out the Guitar Effects Course now. Article Name
How to use a wah pedal
Description
The wah pedal is an incredibly useful effect for electric guitar. Find out how you can get the most out of your wah pedal using exercises, techniques and licks.
Author
Aaron Matthies