Fuzz is a very distinctive type of distortion that first became popular in the 60s and 70s. While fuzz is the key part of a blues-rock tone, it can be used in a wide range of styles and bands from a wide range of styles still use fuzz today. Any time you want a gritty and buzzy edge to your gain tone, fuzz might be what you’re looking for.

One of the reasons I recommend getting a Fuzz pedal is because they’re a lot of fun. They react to your playing in a way most typical distortion pedals don’t. You can roll the volume down on your guitar and enjoy some warm and crunchy tones, then roll it back up for some face-melting fuzz. 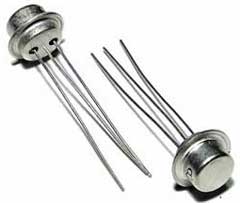 The key part of a fuzz pedal is the transistor used in the pedal’s circuit. There are two types of transistors and the type used plays a big part in the tone you get.

Fuzz pedals that use a Germanium transistor (shown to the right) are usually thought of as producing a warmer tone that can clean up nicely at low volume levels. Silicon fuzz pedals tend to be brighter and produce higher gain.

Some guitarists prefer Germanium while others prefer Silicon. The right type for you depends on the type of tone you want for your fuzz distortion.

Fuzz vs Distortion vs Overdrive

The Guitar Effects Course teaches you how to hear the difference between fuzz, distortion and overdrive so if you want to develop your ears and learn how to use the different types of gain pedals, check the course out.

Here are the top picks for fuzz pedals covered in this guide (click the link to view price and full details on Amazon):

For many guitarists, the most iconic fuzz pedal is the Dunlop Fuzz Face. While you can still get a genuine Fuzz Face today, I don’t recommend it. It’s a big clunky pedal that only accepts batter power. But you can still get the exact same pedal circuit in a more compact version with AC power support and a status LED with the Dunlop FFM2 Germanium Fuzz Face Mini: 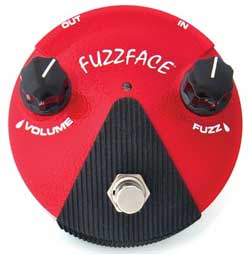 If you’re looking at creating some classic rock or blues tones then this would be a suitable pedal. It doesn’t produce as much gain as some of the other fuzz pedals, which adds to the vintage feel. This pedal uses a Germanium transistor so if you’re looking for a Fuzz Face with a silicon transistor, check out the Dunlop FFM1 Silicon Fuzz Face Mini instead.

When some guitarists think of fuzz, they immediately think of Jimi Hendrix. While there are plenty of other guitarists who make great use of fuzz, Hendrix is a great example of fuzz used well. There are two very popular fuzz pedals Hendrix fans use to recreate his iconic tone: 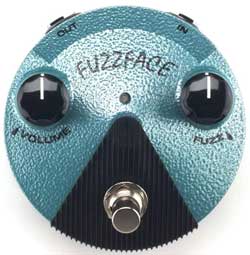 A very popular alternative is the Joyo JF-12 Voodoo Octava. This is a very low priced pedal and offers something extra compared to the rest of the fuzz pedals on this page: it can pitch-shift a signal an octave up into the mix. While you can get a dedicated octave pedal to do this, having it on your fuzz pedal is very handy. Simply hit the left footswitch and you can rip into some Hendrix style licks.

Check out the below video for a good example of the different tones this pedal can produce:

For such a low price pedal it’s a surprisingly solid alternative to the rest of the pedals on this page. It offers more control than most fuzz pedals and still produces a great fuzz tone. The mid-cut toggle and tone knob gives you access to some very different fuzz tones so you might need to play around with it to figure out what type of tone you like the best.

Check out the price and features of the Voodoo Octava here.

I don’t know what type of transistor this pedal uses as I couldn’t find any mention of it online. If I had to guess it would be Silicon as it can produce a lot of fuzz which can be a sign of a Silicon transistor. If anybody knows, please let me know.

Find out more about Jimi Hendrix’s Rig, Gear and Tone in this comprehensive guide. You can see how he incorporated his fuzz pedal with the rest of his effect pedals to produce some iconic tones.

While the Big Muff Pi by Electro-Harmonix is definitely not a modern pedal, it is used by a lot of modern guitarists so that’s why I’m recommending this as the best ‘modern’ fuzz pedal. You can still achieve some classic/vintage tones with it, but it can also produce a lot of distortion for more modern styles.

EHX have a wide range of Big Muff Pi pedals and the pedal I recommend is the Big Muff Pi Nano as it gives you the classic tone in a compact size. 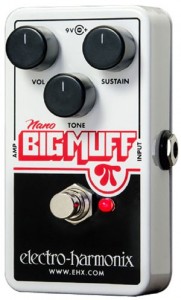 The main reason why this can be thought of as a more modern pedal is that it rides the line between a fuzz and a normal distortion pedal. Remember that fuzz is a type of distortion so it’s possible to have a pedal that is less like a Fuzz Face and more like a typical distortion pedal. You can achieve fuzz tones from this pedal but you can also achieve more conventional distortion tones:

This pedal suits guitarists who like the fuzz sound but don’t play styles that a more vintage pedal would suit. The Smashing Pumpkins album Siamese Dream is a good example of the tone from a Big Muff Pi.

If you want something that can take you to more extreme places, you might want to check out the ZVEX Fuzz Factory Vexter. This pedal can produce authentic 60s style fuzz thanks to it’s Germanium transistors, but it can also go much further. The range of controls you have available can be tweaked to produce very fat grit, messy growls, velcro-like sounds or even 8-bit style synth tones. 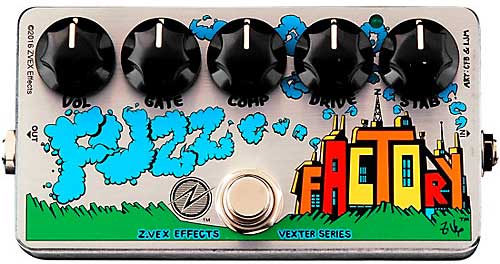 Because this pedal has so many controls and can create some extreme sounds, it’s only recommended for experienced guitarists who know how to control their tone. It isn’t easy to use and a lot of guitarists have written it off as rubbish because they couldn’t figure out how to control it.

If you’re looking for something different you can really experiment with and come up with some unique tones, the Fuzz Factory is a great choice – just beware it takes some time to learn how to use it properly.

I built a Fuzz Factory clone from a kit and it really is an incredible pedal. If you are interested in building your own guitar pedals, fuzz pedals are some of the easiest pedals you can build. 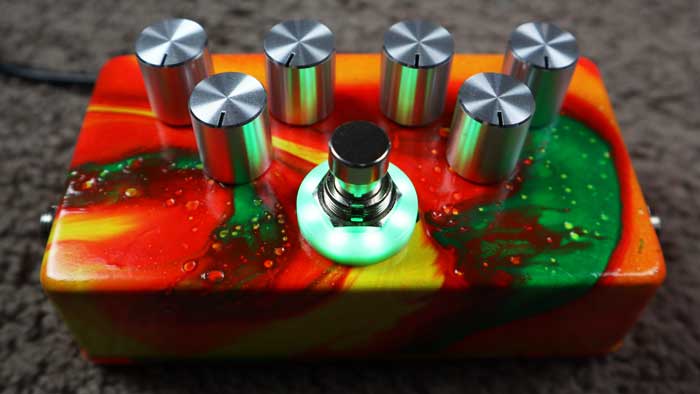 Check out how I built the above Fuzz Factory clone here to see how easy it can be and why you might want to try it for yourself.

I had read a lot about the Fuzz Factory before building my clone and it really does produce some incredible and weird sounds. It can produce a copious amount of fuzz and it is possible to dial in a fuzz effect that isn’t just weird oscillating noise.

Fuzz and octave effects go really well together. In fact, some octave pedals also have inbuilt fuzz. There are plenty of these pedals around but one I want to highlight is the Wampler Fuzztration. 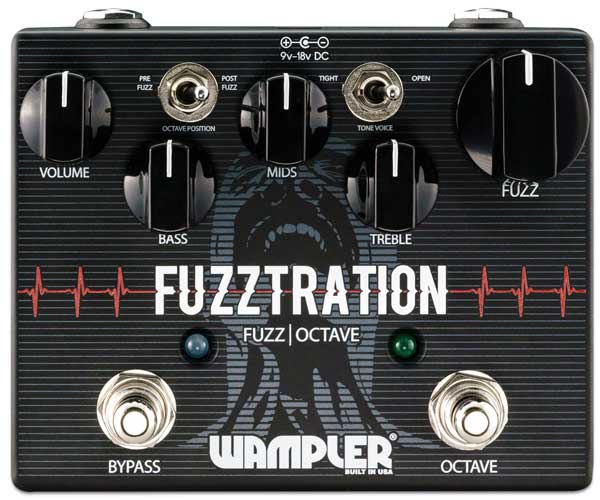 What makes this fuzz pedal worth talking about is the level of control it gives you over the fuzz. In addition to the three-band EQ, volume control, and fuzz control knobs, you also have a Tone Voice toggle.

The Tone Voice toggle lets you choose between two different fuzz circuits. This pedal is basically two fuzz pedals in one. While you will probably prefer one fuzz sound over the other, it’s nice to be able to toggle between two fuzz sounds to match what you’re playing.

The Fuzztration takes this further by allowing you to toggle the position of the octave and fuzz effects. You can set the octave to be before or after the fuzz which is a fantastic way to quickly access different sounds.

If you’re looking for more control over your fuzz and don’t like the idea of only having two or three knobs, the Wampler Fuzztration is definitely worth considering.

Getting the Most Out Of Your Fuzz Pedal

The first time I tried a fuzz distortion out when I was a beginner I hated it. It sounded messy and I thought it was a junk pedal. Looking back I know that the pedal wasn’t junk, it only sounded like junk because I didn’t know how to use it properly. Unlike other distortion or overdrive pedals, fuzz pedals have a bigger learning curve.

This is also why there aren’t many videos in this guide of people showcasing the mentioned fuzz pedals. Many guitarists in YouTube videos didn’t know how to set up their fuzz tone properly and as a result they wrote the pedals off as rubbish (just like I did when I was a beginner). Keep this in mind if you watch videos on YouTube of people reviewing/demoing a fuzz pedal – even if they’re a great guitarist they may not be getting the best results out of it.

Knowing where to place the fuzz pedal in your rig is important to getting the right fuzz sounds – especially if you also use a wah pedal. The wah pedal and fuzz combination has produced a lot of iconic songs and continues to be a lot of fun for guitarists to jam with today. If you don’t have a wah pedal, check out the Best Wah Pedals here to find a match for your fuzz pedal.

How to Build a Fuzz Factory Clone (DIY Guitar Pedal Kit)
Best Reverb Pedals: Ultimate Buyer's Guide to Reverb
Best Uni-Vibe Pedals: The Ultimate Guide to Univibe
Best Guitar Pedals in 2017
EHX Mini-Synthesizer App Review
The Ultimate Guide to Jimi Hendrix: Tone, Gear, Effects
Summary
Article Name
Best Fuzz Pedals: Ultimate Buyer's Guide to Fuzz Distortion
Description
Find out what fuzz is, how it compares to distortion and what to look for in a fuzz pedal. Check out these recommended fuzz pedals to get started with fuzz.
Author
Aaron Matthies