If you want to learn Metallica songs on guitar, you’re in for some good news.

If you’re a beginner just getting started, there are some songs that are easy enough to start learning right now. If you’re an intermediate-level guitarist, you can work your way through the bulk of Metallica’s riff and solo-filled songs. If you’re an advanced guitarist, you may enjoy a lot of their more technical songs and solos.

There’s plenty of variety in their songs across their albums, the riffs and solos are great fun to play, and there’s a lot we can learn from the songwriting.

The other good news is that there are some shortcuts you can take to learn Metallica songs on guitar quicker.

If you want to learn how to play Metallica songs on guitar, read through this guide before you start looking up song tutorials or TABs. While a song tutorial helps you get started with learning a song, the skills and ideas covered in this article will help you get better at all of Metallica’s songs.

In this article, I’m going to give you an overview of the skills, techniques, and concepts you need to work on to learn Metallica songs on guitar. If you practice these techniques and skills (exercises in TAB included), you’ll find it much easier to learn their songs.

There are some guitar techniques that appear over and over across Metallica’s songs. The more you practice and improve these techniques, the easier it will be to learn their songs. Each time you learn a new Metallica song, you’ll recognize these techniques and find it a lot easier to practice the song.

James Hetfield is well known for his down-picking technique. While other guitarists might play rhythm parts using alternate picking, James tends to play almost everything using only down-picking.

The reason he uses down-picking is for the powerful sound it creates. There is a slight difference in tone when you pick a note up or down. By picking every note with a down-stroke, it creates a consistent tone that works well with metal riffs.

You can try this out for yourself to hear how your picking style changes the sound of a rhythm part.

Try playing the below exercise:

If you’re unfamiliar with the picking symbols, the first bar is played with all down-picking, then the second bar uses alternate picking (down up down up).

While playing all-down-picking tends to sound better when playing Metallica riffs, it can be a challenge to build your picking speed and endurance up if you’re not used to it. Some of Metallica’s songs are fast, so you want to work your down-picking up until you can consistently play at a high tempo.

Here is an example of a riff to work on using all-down-picking:

Once you can play the above riff with ease at 220bpm using all-down-picking, you should be able to use down-picking on pretty much any Metallica song without problems.

Here are a couple of Metallica songs using all-down-picking worth practicing:

If you can play the above songs at full speed using all-down-picking, you’ll find all the rest to be easy.

While James Hetfield does mainly use all-down-picking, there are times when he does use up-picking. A good example of this is with something called ‘gallop’ rhythms.

A gallop rhythm is a group of three fast notes repeated over and over. When you play them fast enough, it sounds like a gallop. The technique is popular in metal and you’ll hear it in quite a few Metallica songs.

Check out the first few bars from ‘Hardwired’ for a simple example of a gallop rhythm:

It’s easy to develop a strong gallop technique after you’ve built up your down-picking technique.

Here are some Metallica songs using a gallop rhythm worth practicing:

The technique is easy to practice, so spend some time with a metronome and build up your gallop stamina. When you feel your picking hand start to get tired, take a short break and come back later. You’ll quickly build up your picking endurance.

If you need a break from practicing furious down-picking or gallop rhythms, here’s something a bit easier to work on. A lot of Metallica songs have clean guitar parts that make use of arpeggios.

An arpeggio is a fancy name for when you play a chord by picking the notes individually instead of strumming them.

The intro to Fade to Black is a good example of the style of clean parts Metallica use:

To play this part, you hold your first and third fingers down onto the 2nd and 4th frets. Then when you pick the strings, you’ll hear the notes ring out over the top of each other as you hear in the song.

Then you only remove a finger when you need to play a lower fret or open string (eg: on the second bar when you play the open string).

For an easier example to get you started, try working on the main riff to One:

Make sure each note rings out clearly. When you play the open string at the end of the first bar, you should hear two notes ringing out. If your fingers are positioned wrong, they might touch adjacent strings and stop one of the open notes from ringing out.

Here are some Metallica songs with clean arpeggio parts worth practicing:

Some of these clean parts are very similar to each other, so after a couple of songs, you’ll get the hang of this style of playing. Take your time with each song and make sure the notes ring out clearly.

Kirk Hammett loves the Pentatonic scale. He loves it almost as much as he loves using a wah pedal (learn how to use a wah pedal in this lesson).

While he doesn’t use the Pentatonic scale for every solo, it is a key part of his style. Once you learn the first Pentatonic ‘box’ shape, you’ll start seeing it everywhere in his solos.

The good news is that the Pentatonic scale is incredibly easy to learn. Once you learn a few basic scale shapes, you’ll find it a lot easier to learn and memorize Metallica solos. Some of the easier Metallica solos fit completely in the basic Pentatonic box shapes.

To give you an example of the Pentatonic scale in action, here is the first ‘box’ position: 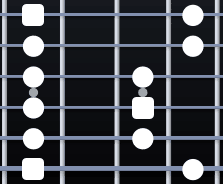 When this shape is used on the 12th fret of the guitar, we call it the ‘E Minor Pentatonic’. A lot of Metallica songs are in the key of E minor, so this is a useful position to memorize.

Here is a simple exercise you can use to memorize this box shape on the 12th fret:

Here are the first few bars of the solo to Enter Sandman so you can see the E Minor Pentatonic scale in action:

Look closely at each note and think about which of these notes fit into the Pentatonic shape shown above.

Here’s the first few bars of a simple Metallica solo from Nothing Else Matters which is loosely based on the Pentatonic scale on the 12th fret:

You may notice some notes outside of the Pentatonic box shape in this solo, but you should be able to see how the solo uses the Pentatonic scale as a rough starting point.

The repeated lick in the third bar of the solo you will see used in many Metallica solos as well as solos by other bands and guitarists. As you learn more Pentatonic based solos, you’ll see that guitarists tend to ‘share’ a lot of the same licks.

If you are interested in learning to play Metallica solos on guitar, I highly recommend starting with the solo in Nothing Else Matters. It’s a relatively easy solo to learn and great fun to play as a beginner just getting into lead playing (it was the first Metallica solo I learned to play).

Palm-muting is an essential technique to master when playing metal or rock. Trying to play Metallica riffs without proper palm-muting will just sound and feel wrong.

Most Metallica songs use palm-muting, so it’s easy to find examples of it in action. Palm-muting allows you to tighten up rhythm parts to give them a chunkier or more percussive sound.

As a general rule, whenever you see an open string in a Metallica riff, it’s probably played with palm-muting.

Let’s have another look at the intro riff to Master of Puppets for a good example of how Metallica use palm-muting:

Try playing the riff without palm-muting. It won’t feel right and it definitely won’t sound right. The notes will sound messy at full speed. By muting the open strings and not muting the fretted notes, it completely changes how the riff sounds.

This is called dynamics and palm-muting is a powerful way to add dynamics to your playing. Palm-muting is a great way to change the feel of anything you’re playing and to emphasize different notes.

There’s no point listing songs that use palm-muting because almost all of them will use it at some point. Have a listen to any Metallica song and see if you can tell which notes use palm-muting and which don’t.

Here is a simple Metallica riff from For Whom The Bell Tolls that makes great use of palm-muting with power chords:

Try playing this riff with heavy palm-muting to really focus on making those power chords chunky.

Here are some tips to keep in mind when you learn and practice any Metallica songs:

If you’re wanting to get started with learning some Metallica songs, there are some songs that are very easy to learn. Starting with these songs will help you get used to the techniques covered above before you move on to more complex songs.

Check out these songs for some easy rhythm parts to learn:

If you want to start learning some solos, these Metallica songs contain the easiest solos and lead parts:

Even if you feel like you’re ready to take on more complex solos, I highly recommend starting with the easier solos. Learning how to master an easy solo is a lot better than doing a mediocre job at a hard solo.

Start with the easier solos and get really good at playing them. Then when you do go on to more complicated solos, you’ll have far more skill to work with.

Check out this lesson on Easy Guitar Riffs to Learn for a closer look at a couple of Metallica riffs as well as other great rock riffs that are easy to learn.

Check out these Easy Metal Guitar Solos for a closer look at the intro solo to Fade to Black, as well as other easy metal solos worth learning.