Every week I receive emails from people asking me what guitar effects are used on specific songs. I used to reply back to all of these emails with the answers and even wrote a guide on the Effects used on All Along The Watchtower by Jimi Hendrix because I was asked about it so often.

But by giving people the exact answers, I was going against what I know as a guitar teacher. If I told you exactly what effects and settings are used on a song, you miss out on developing your ears and learn to figure out different effects. Then when you want to move on to the next song, you’re starting again from scratch.

So in this guide I’ll explain why you shouldn’t look for the easy answers and why it’s worth the effort to figure it all out by ear.

Table of Contents show
1 Why Presets and Recommended Settings Can Cause More Harm Than Good
2 How to Figure Out What Guitar Effects A Song Uses
2.1 Identifying Effects Used
2.2 Replicate the Guitar Tone
3 Next Steps
3.1 Related Guides and Lessons:

Why Presets and Recommended Settings Can Cause More Harm Than Good

In my Ultimate Guide to Guitar Amp Settings, I explain why searching for the perfect amp settings for a tone online is a waste of time. It’s one of the most important guides on this website because it’s a topic so many other websites get wrong.

When it comes to replicating an effect or tone you hear in a song, knowing the effects used is only one part of the picture. The other part – the more important part – is knowing how to tweak and control those effects properly. The normal approach people take is to search online to find the suggestions for settings. You might search for “delay settings for lead guitar” or “distortion settings for Metallica”. While you might come across suggestions that just happen to work, you won’t learn from it. Then when you go to the next song you need to start again from scratch.

You might feel that presets and recommended settings help give you a starting point to work with, but I’ve seen the negative side of all of this in my students over the years. Presets and recommended settings are shortcuts that cut out the important part where you develop your ears and build your sense of tone and effects. They’re like a recipe that cuts out the first half of the instructions on how to cook the food. You’re told what you end up with, but aren’t told how to put everything together.

Imagine a great chef tasting a soup. Just from a taste the chef can figure out what key ingredients are used and can get pretty close at replicating the same taste and texture of the soup. A beginner might be able to identify one or two key ingredients, but even if all the ingredients were known he might still struggle to replicate the taste and texture of the soup. It’s exactly the same with guitar effects and tone. The more you learn, the easier it will be to identify and use effects.

The reason I’ve spent countless hours creating an online course on guitar effects is because I know how learning about effects can improve your control over your tone.

I highly recommend you try to avoid searching for effects settings or presets online as much as you can. There are times when they can be handy, but most of the time you’re going to be better off properly learning about effects and tone.

How to Figure Out What Guitar Effects A Song Uses

The above information should make it clear that identifying the effects used in a song is only half of the picture. Even if you know the exact pedals used in a song, you may find that you still have trouble copying the guitar tone you hear.

Let’s look at how to identify effects used in a song, then how to replicate the settings to match the song.

The above clip uses four guitar effects pedals and a clean guitar amp. Listen to the clip a few times to get a feel for what you’re hearing.

Try to identify all four effects.

How many effects you can immediately identify will give you a quick check on how well you understand effects.

One or two of the effects are very common and many guitarists will easily identify them, but you might struggle with the third and the fourth will probably stump most people.

If you’re not very familiar with the differences between similar sounding effects (eg: what’s the difference between a phaser and a flanger?), you’re likely to think the clip uses one type of effect when it’s really something else.

If you’ve spent a lot of time experimenting and learning about the range of guitar effects available today, you can probably identify three or all four effects easily.

If you can’t figure out what any of the effects are in the above clip, you need to spend some time learning about effects. Even if I tell you exactly what effects are used (I will later on), it’s not going to help you for the next song.

A great way to learn about different effects is to use a guitar plugin such as AmpliTube, BIAS FX, or Guitar Rig and jam with the different gear they use. Once you spend some time comparing similar pedals such as a phaser and a flanger, you’ll find it much easier to identify them in songs.

Check out some great guitar plugins in this guide. 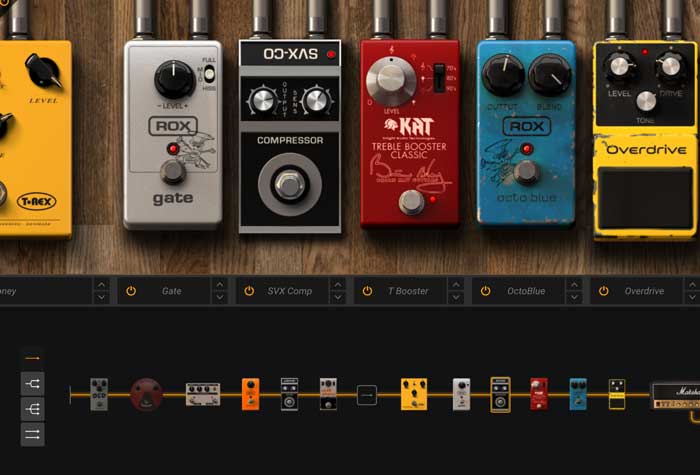 If you have a multi-effects pedal, you can also use that to learn about different effects.

Why is it important to learn about guitar effects?

Being able to correctly identify effects by ear can only be done after you’ve learned quite a bit about effects.

If you haven’t spent time learning the difference between a phaser and a flanger, it’s going to be really hard to tell them apart in songs.

Once you can get to the point where you can easily identify multiple effects used at the same time, you’ll find it much easier to use the effects properly and control your tone.

In other words, you’ll be able to set up better guitar tones the more you understand the pedals and gear you use.

Let’s say you correctly guess all four effects used in the above clip, your next step is to try and replicate the tone you hear. This is where it starts to become clear why someone telling you what effects were used in a song doesn’t really help you. If you try to replicate the tone from the clip above, you’re only going to get close when you understand quite a bit about how each effect works.

You can see this all the time in online forums or YouTube comments. You’ll see people post questions like “what effects are used in For the Love of God by Steve Vai?”, then after they’re told a few answers they say “I tried those effects and it doesn’t sound anything like his tone!”.

The best approach from a learning point of view is to learn about each individual effect first, then learn how each effect interacts with other effects. This is the approach used in the Guitar Effects Course. You start out by hearing each type of pedal (eg: a phaser) and how each setting changes the effect you hear (eg: how the depth knob changes the sound). Then you hear how the effect changes when combined with another effect (eg: phaser and overdrive).

After you go through this process, you build up a strong understanding of the effect in your mind so next time you hear it in a song, you can identify it as well as have a good idea what settings to use and what position to place it in your rig.

The final step is what you do after you replicate the tone (or get very close). Most people stop here, but I highly recommend this next step. The final step is to think about what you could do to further improve the tone to your own preferences. In other words, how can you put your own signature touch to the tone rather than merely copy it?

That might mean dialing back one of the effects, adding another effect or adjusting the EQ. When you start thinking about what you like about a tone and what you might change to improve it (in your own mind), you start to learn so much more about using effects and shaping your tone.

Keep this in mind the next time you want to replicate a tone you hear in a song. Learn to replicate that tone, but don’t stop there. Keep going and keep shaping that tone to suit your own unique tastes as a guitarist. You’ll learn a lot and strengthen your understanding of effects.

So what effects pedals were used in the earlier clip? In order, they were:

Now that you know for sure what pedals were used in the clip, go back and listen to it a few more times. Try to hear how the compressor changes the guitar tone. Try to get a feel for the depth and rate of the chorus. As I mentioned earlier, knowing what effects are used is only part of the picture. Try to replicate the tone in the clip using your pedals. Then experiment with how you might change the tone to suit your own style of playing.

The Guitar Effects Course available here is designed to help you develop your ear and learn about all common types of guitar effects. Throughout the course you’ll hear clips like the one above as well as explanations of what to listen for to identify different effects and how changing different settings changes what you hear. If you’re serious about getting a better tone or making the most out of your gear, I recommend working through the course.

The next time you want to learn a song and want to find out what effects are used, don’t give in to the easy option. It might be tempting to search online for answers, but you’ll be far better off as a musician if you spend the time to study the song and figure out the effects by ear.