In this guide, you will learn everything you need to know about fretboard markers, dots, inlays and why some guitars have none at all.

To learn about other parts of the guitar, read this Ultimate Guide to Guitar Parts.

Table of Contents show
1 Why Are There Dots on a Guitar Fretboard?
2 Standard Fretboard Dot Positions
3 Guitar Neck Side Dots
4 Why There Are Two Dots on the 12th Fret
4.1 Memorizing the Fretboard Using Fret Markers
5 Types of Fretboard Markers and Inlays
5.1 Standard Dot Markers
5.2 Block Inlays
5.3 Tree of Life Inlays
5.4 PRS Bird Inlays
5.5 Shark Fins
5.6 Unique Guitar Inlays
5.7 LED Inlays
6 Fretboard Inlays and Markers FAQ
6.1 What Are The Dots On a Guitar Fretboard Called?
6.2 Can You Put Inlays on a Guitar?
6.3 How Many Frets Does a Guitar Have?
6.4 Why Do Some Guitar Not Have Fretboard Markers?
6.5 Related Guides and Lessons:

Why Are There Dots on a Guitar Fretboard?

The dots you see on a guitar fretboard are to help the guitarist easily find any position on the fretboard. The dots are a quick visual guide to make it easier for guitarists to jump to any fret position.

Take a look at the below fretboard and find the 15th fret as quickly as possible:

Without any dots or markers on the fretboard, it can be tricky to quickly find the correct fret. You have to count the frets from the open string to find the right position, which is very slow to do.

While guitarists eventually learn to find the frets by feel, fretboard markers make the job a lot easier.

If a guitar uses dots or markers on the fretboard, you can quickly learn to find any fret position.

Let’s look at the standard positions and how they help you build confidence over the fretboard.

The position of dots or fretboard markers on guitars all follow a standard pattern.

Here is a diagram showing the standard position of fretboard markers on a guitar:

This means, if you memorize the positions of these markers, you’ll be able to easily find your way around the fretboard.

Need to play the 10th fret?

You might notice that there is a large gap between the markers on the 9th and 12th frets.

If you remember that the 12th fret is the one with two dots after the large gap, you can simply count two frets backward from there to get to the 10th fret.

Of you can jump to the 9th fret (the last dot before the double-dot) and move up one more fret to get to the 10th fret.

The good news is that once you learn to use fretboard markers, you’ll be able to play pretty much any guitar the same way.

While almost all guitars use either dots or fancy markers (I’ll go through some common examples later), some guitars don’t have any dots or markers on the fretboard.

Classical guitars as shown below traditionally don’t use fretboard markers (learn about different types of guitars in this guide). 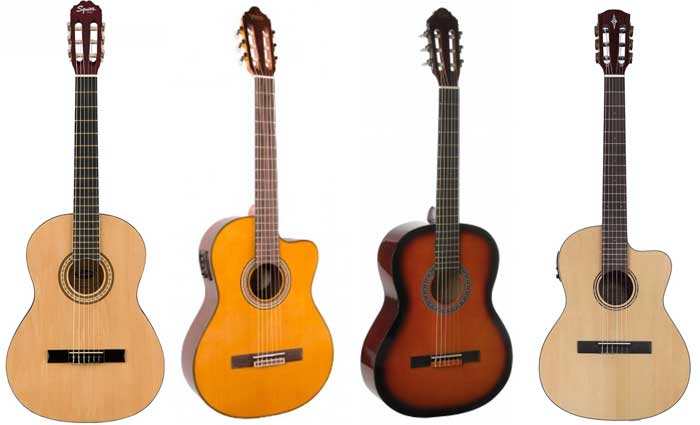 As you can see from the above photo, there are no markers at all on the fretboard on classical guitars.

So how can you find your way around the fretboard on these guitars?

Fortunately, there is a second place you can find dots on a guitar.

Almost all guitars will have a set of dots on the side of the guitar neck as shown below:

These dots are easily visible from your standard playing position, which means they will always be in view.

They follow the same positions as fretboard markers, so you can use either set of markers to find your position on the fretboard.

Even guitars with no fretboard markers use these side dots so you can easily find your way around the fretboard.

Some guitars even use glow-in-the-dark paint for these markers so you can see them while performing on stage.

Here is the typical view of what you might see if you try to play an acoustic guitar while sitting down: 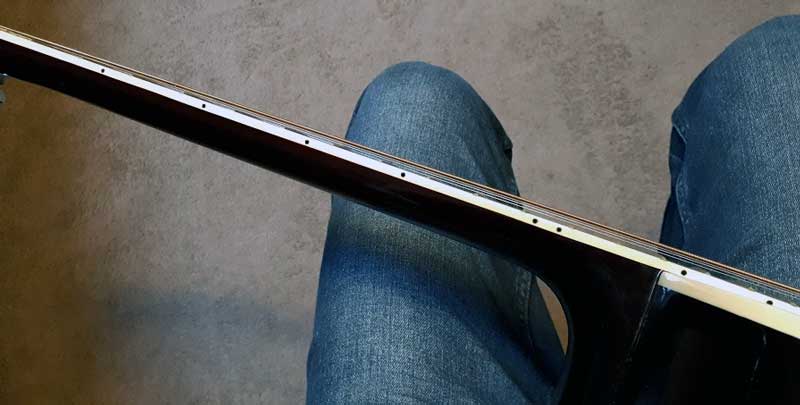 Unless you lean over the guitar, you won’t be able to see the fretboard markers.

But the side dots are easily in view and you can use them to move your hand into any position you need to.

Why There Are Two Dots on the 12th Fret

The two dots on the 12th and 24th frets are important markers because that position is an octave higher than the open strings.

If you haven’t learned about intervals yet (learn about them in this simple lesson), an octave is an important interval to understand.

The basic way of thinking about octaves is that it’s when the notes in a scale start repeating.

In the below diagram, I’ve labeled the note names on the low E string up to the 12th fret.

You can see that the note on the 12th fret is E, which is the same as the open E string.

There are two dots on the 12th fret on a guitar because that’s the point where the notes start repeating from the open string.

This is handy to know when you start learning scales because you can reuse the same scale shapes below and above the 12th fret.

The 24th fret (not all guitars have 24 frets) is two octaves higher than the open string, which is why it also has two dots.

Some guitars will have two dots on the 7th fret, but that’s a tradition that isn’t commonly used today.

The reason the 12th fret marker is really important to remember is because it splits up your fretboard.

For example, have a look at the below fretboard and try to figure out what the note name is for the 15th fret on the low E string:

Tip: the notes repeat at the 12th fret onwards.

This means the 15th fret is the same as the 3rd fret, which is G.

Even if this seems confusing now, with a bit of practice, you’ll quickly discover how useful it is.

If you every need to figure out the note name of a note above the 12th fret, minus 12 from the fret number and look at what that fret is.

If you want to memorize the fretboard, read this guide for the best methods.

Types of Fretboard Markers and Inlays

Here are some examples of different fretboard markers and inlays you’re likely to see.

The most common type of fret markers you will see on acoustic and electric guitars is standard dots.

Tip: try counting how many frets the above guitar has by counting using the dot markers.

The below guitar uses fanned frets (find out about fanned frets here) and uses dot inlays in a slightly different way.

The classic Les Paul tends to use block inlays or a sort of trapezoid shape.

These inlays are usually made out of mother-of-pearl or similar materials.

You can see that these block inlays follow the same pattern with an extra marker on the 1st fret (but not the 13th fret).

A very popular fretboard inlay is the ‘Tree of Life’ pattern that began on Steve Vai’s signature Ibanez JEM series.

While inlays like this might seem confusing at first, look closer and you’ll see that it still follows the 3, 5, 7, 9, 12 pattern. On those frets (and the 1st fret), you can see there are extra leaves that fill up the entire fret space.

Remember that even guitars with elaborate inlays like this also have the standard dots on the side of the fretboard with two dots on the 12th and 24th frets.

Speaking of Steve Vai, his other well-known inlay design is the ‘Disappearing Pyramids’ found on his Universe guitars:

Note: the above guitar is a six-string, but the Universe range are well-known 7-strings.

The bird inlays are instantly identifiable on PRS guitars.

They follow the same standard positions and the bird on the 12th fret is clearly larger, to emphasize that it is the 12th fret.

There are PRS guitars that don’t use bird inlays, but they aren’t as common.

Pick up any Jackson guitar and the chances are it will use their iconic shark fin inlays as shown below.

There are so many different guitar inlays out there and luthiers around the world can create custom and intricate inlays.

Here are a few examples of what is possible with custom inlays.

The above PRS Dragon is an example of how extreme inlays can get. Inlays like this aren’t to help you find your position on the fretboard and more of an art display.

While full fretboard custom inlays are rare, it is common to see unique inlays on the 12th fret.

Here are some examples of different 12th fret inlays you can find (usually on signature models):

While the most common materials for inlays are mother-of-pearl, abalone, plastic, and similar materials, there is one type of inlay that will always stand out.

LED inlays allow you to light up the fretboard markers for live performances. 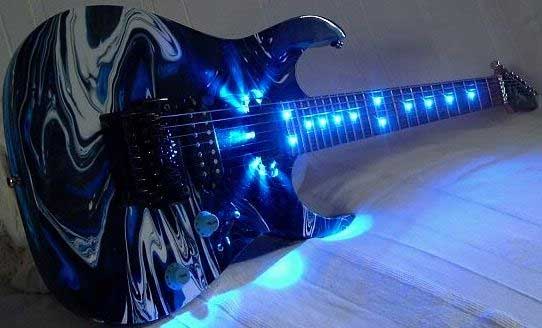 While glow-in-the-dark materials can be used in the inlays, LEDs have a more dramatic effect.

LEDs can be placed in the fretboard markers, or on the side markers as shown below. 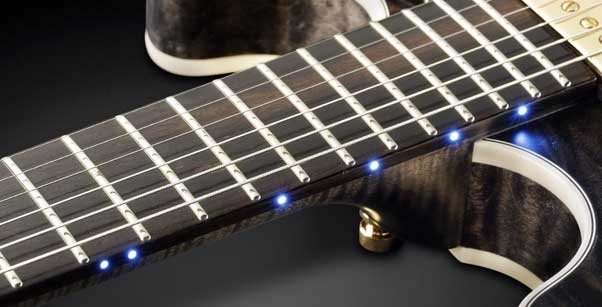 Devin Townsend uses LEDs in some creative ways in his signature guitars as you can see below. 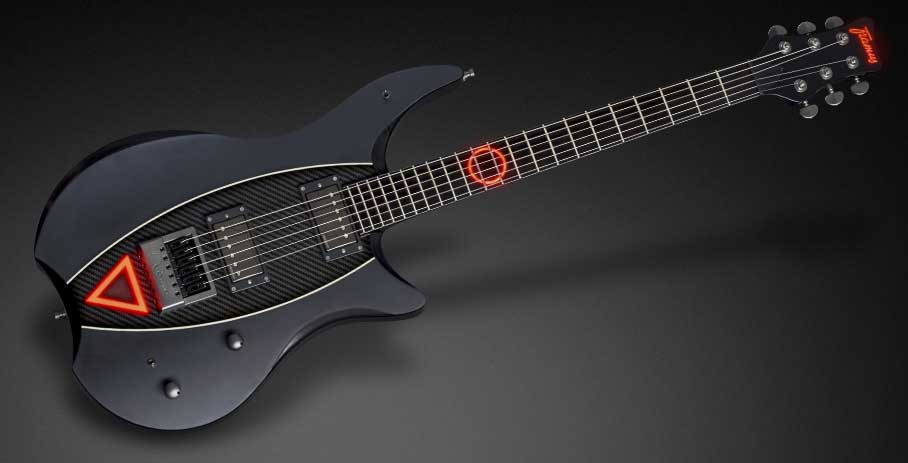 There are so many possibilities with fretboard markers and inlays, so the above examples only scratch the surface on what is available.

Here are some common questions and answers about fretboard markers, dots, and inlays.

What Are The Dots On a Guitar Fretboard Called?

The dots on a guitar fretboard are called fret markers or inlays. These dots are to help guitarists find their way around the fretboard. Not all guitars use dots and a wide range of shapes and designs are used.

Can You Put Inlays on a Guitar?

It is possible to create custom inlays for a guitar fretboard. Somebody with high-level woodworking skills can create any type of inlay and embed them in a guitar’s fretboard.

How Many Frets Does a Guitar Have?

Why Do Some Guitar Not Have Fretboard Markers?

Learn more about guitar parts and features in this guide.