Making your guitar sound like a sitar can be a fun way to come up with exotic-sounding parts, lay down interesting textures for your recordings, or just learn to jam with exotic scales.

Sitars were incredibly popular in the late 60s, but can be heard in later rock, pop, metal, and many other styles. Sitars are lush sounding instruments and can completely change the sound and feel of a song.

While the real instruments are hard to learn and very expensive, it is possible to get authentic sitar sounds from your guitar.

There are four ways you can make your guitar sound like a sitar:

Some of the above methods are cheap, easy, and give you a decent sounding sitar sound. Some of the other options are more expensive but will give you seriously impressive sitar sounds.

Have a read through this guide to see how you can make your guitar sound like a sitar and which option is right for you.

If you like the idea of being able to easily make your guitar sound like a sitar, bass, violin, saxophone, synths, or any other instrument, I highly recommend looking into MIDI pickups.

My Ultimate Guide to MIDI Guitar covers everything you need to know if you are interested in learning about MIDI.

A MIDI pickup converts your guitar signal into a MIDI signal. A MIDI signal can then be used to turn your guitar into almost any instrument you want.

This is a MIDI pickup: 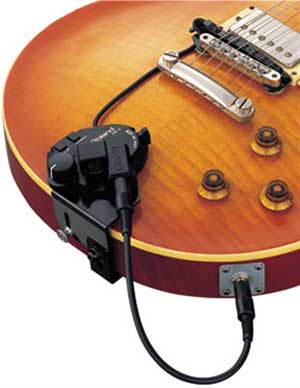 There are a few different options, but they all sit under your guitar’s strings.

The MIDI pickup is then sent to a processing unit such as the BOSS GP-10: 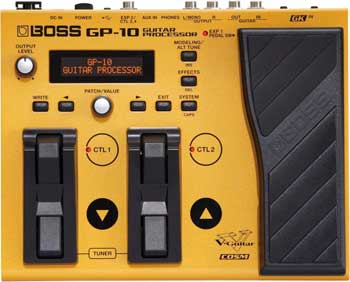 Once you have a MIDI pickup and a processor, you simply select a sitar preset and you’ll get a seriously impressive sitar tone.

You can then use any of your existing pedals or effects with the sitar tone, or use any onboard effects as you like.

Unless you’ve tried out a guitar with a MIDI pickup before, it can be hard to emphasize how good these tones can sound.

This is a more expensive option than some of the other methods covered in this guide, but it’s a useful option if you want to experiment with a lot of different instrument tones.

Any guitarist who uses a MIDI system will tell you how liberating it is to be able to easily jump between any instrument sound they want.

If you are interested in using a MIDI pickup to make your guitar sound like a sitar or any other instrument, check out my Ultimate Guide to MIDI Guitar here.

If you want sitar-like sounds as well as like the idea of experimenting with other exotic effects, it’s hard to go past the Ravish Sitar pedal by EHX. 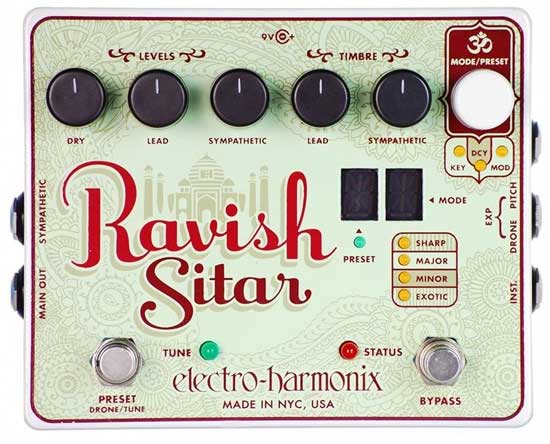 As you can see, you’re able to dial in different aspects of a sitar tone, which is a big advantage over other methods covered in this guide.

You can crank up the sympathetic sounds, or keep it fairly mild to give your normal guitar tone a slightly sitar-like feel.

For most guitarists who want to experiment with sitar sounds, this is the easiest way to do it for a decent price.

Simply connect this pedal to your rig and you’ll be able to access a wide range of sitar-like sounds as well as other exotic and oriental sounding effects as you can hear in the below video.

As you can hear in the above video, it produces some good sitar-like tones.

Connecting an external expression pedal opens up ways to interact with the effect and can give you creative tones.

While there are other sitar simulator pedals out there such as the Danelectro Sitar Swami, the Ravish Sitar is by far the best I’ve heard so far.

As far as pedals go, the Ravish Sitar is expensive. While it’s great for producing sitar sounds, it is limited compared to a MIDI pickup.

So you might want to weigh up whether this is the best option for you or whether you may prefer the extra flexibility with a MIDI pickup.

In addition to a variety of electric, acoustic, hollow-body, 12-string, and other types of guitar tones, it also has presets for banjo, resonator, and sitar tones.

I own an old Variax 600 and while I enjoy using the variety of electric and acoustic guitar sounds, the sitar is incredibly fun to use.

The sitar tone is far more authentic than a pedal and on the newer models you’re able to change the guitar’s tuning at the turn of a knob.

For guitarists who just want a way to get some sitar-like tones from their guitar, the Variax is overkill.

But for guitarists who like the idea of being able to access a wide range of guitar tones as well as sitar tones, the Variax is worth considering.

While I’m sure you can find the older Variax models like the 600 I use for cheap, I recommend one of the newer models as they give you far better control as well as better quality builds.

If you’re trying to decide between a Variax and a MIDI guitar system, think about what type of tones you want to access.

The Variax is designed to create authentic guitar tones, while a MIDI system can be used to create almost any sound or tone you want.

So if you like authentic guitar tones, Variax might be right for you. If you want to explore other instruments, synths, weird effects, or other sounds, MIDI is far more flexible.

If you’re serious about getting an authentic sitar tone while playing guitar, the best option is to buy an electric sitar.

Unlike actual sitars which are a completely different instrument, electric sitars are a normal electric guitar with modifications to make them sound like sitars.

There are two ways an electric guitar can be modified to sound like a sitar. 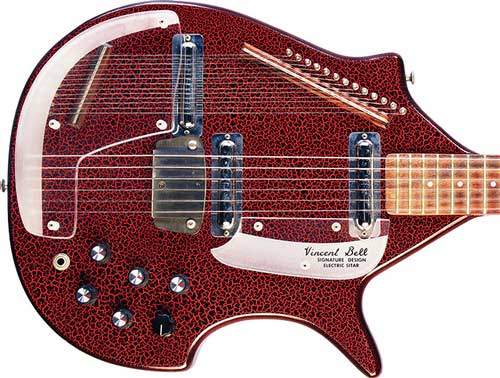 The above photo is the classic Coral Electric Sitar and is what you can hear in most western music that uses sitar tones. It came out in 1967 and fueled much of the sitar-driven music you’ve heard from that time.

What made this so popular is that you could access sitar tones while playing a normal standard-tuned guitar neck. This feels the same to play as any other guitar but sounds like a completely different instrument.

Those thin strings above the normal six guitar strings is what creates the sitar tone.

Coral sitars are collector’s items now, so if you wanted to get one of these, expect to see eye-watering prices.

The other way of creating a sitar-like tone from an electric guitar is to use a ‘buzz box’ on the bridge.

The above photo is a Danelectro Baby Sitar. It does away with the sympathetic strings while still creating a good sitar sound.

The way the strings rest against the bridge creates the twangy sitar sound (very similar to how real sitars work).

If you’re serious about sitar tones and like the idea of having a separate instrument only used for sitar tones, then the Danelectro Baby Sitar is worth checking out.

I can’t imagine many guitarists would be that serious about sitar tones that it justifies buying a separate instrument, but this option does produce more authentic sounds compared to a simulator pedal or a MIDI pickup.

Tips for Making a Guitar Sound Like a Sitar

Once you have one of the above options, you can start making sitar-like sounds.

But if you want to get an authentic sitar sound from your guitar, follow these tips:

Jamming with the sitar preset on my Variax has always been a quick and easy way to just have fun while jamming.

If you use any of the above methods to make your guitar sound like a sitar, you’ll really enjoy how it opens your guitar jamming up to exotic sounds and playing styles.

Here are some well-known songs that use sitars that you might want to learn to get you started:

If you want to get other instrument sounds from your guitar, find out how to make your guitar sound like a bass in this guide.