While the Dunlop Crybaby may be the go-to wah pedal for a lot of guitarists, Steve Vai’s signature wah pedal has some nice features that make it worth checking out. 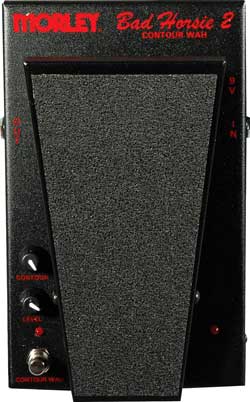 What is the Morley Bad Horsie 2 Contour Wah

What makes Steve Vai’s signature wah pedal, the Morley Bad Horsie 2 Contour Wah, interesting to me is that it is a ‘switchless’ wah pedal.

A normal wah pedal has a switch under the ‘toe’ of the wah. To activate the wah you have to push down until that switch is triggered. To disable the wah, you push the toe down again to trigger the switch. When you think about it, it’s a horrible design. It means the first sound you get from the wah as soon as you activate it is the highest frequency of the wah’s range.

It’s much better than having a footswitch on the side of the wah, but it’s still less than ideal. We put up with it as guitarists because that’s the way it’s always been.

The Bad Horsie 2 (and other Morley wahs) changes this by removing the switch under the wah. The wah automatically activates as soon as your foot touches the pedal. As soon as you remove your foot from the wah, it deactivates.

If you’ve never tried this before, it can be hard to understand how much of an improvement this is from the typical wah design. I remember watching a guitarist at a gig rip into a nice wah-infused solo, only to realize after the solo ended that the wah didn’t turn off because he didn’t didn’t push down hard enough to trigger the switch.

What should have been some nice big chords for the final chorus ended up as a weird mush because the wah was still active. I still remember seeing the look of desperation on his face as he repeatedly stomped on his wah to try and turn it off.

With the Bad Horsie 2 (and any other switchless wah), it automatically turns on when you want to use it and turns off when you’re done with it. Simple. No need to stomp hard on it at the end of a solo – just take your foot off of it. You’re also able to adjust how quickly the wah turns off. So if you find that it cuts out as soon as you rock the wah back to the heel position, a simple adjustment will fix it.

After I tried this wah out, I never looked at ‘regular’ wah pedals in the same way again. If you haven’t already bought a wah pedal, consider getting a switchless wah like the Bad Horsie 2.

The only downside of a switchless wah is due to the fact that it turns off as soon as you take your foot off of it. Some guitarists like to leave the wah on in a certain position to act as a filter. If you try this with a switchless wah you’ll need to keep your foot on it to keep it on. A better alternative if you like the sound of a wah-as-a-filter is to use the EHX Cock Fight pedal. This pedal was designed for exactly that purpose – a wah-like filter in a fixed position.

A lot of wah pedals (eg: Original Dunlop Crybaby) give you zero control over the wah sound. I never understood why guitarists were okay with this. Imagine a tubescreamer that had no knobs to adjust the drive or level. Imagine a delay pedal that didn’t allow you to change the delay time. But it’s okay for a wah to give you no way to customize the tone? Some guitarists have to resort to modding their pedal to get the tone they want. Other wah pedals hide dip switches inside the enclosure.

The Bad Horsie 2 gives you a knob to adjust the contour frequency and a level knob. Activating the footswitch changes the wah from the standard mode (based on Steve Vai’s specs) and the contour mode. While it might not give you as much customization as other wah pedals, it should be enough for most guitarists. 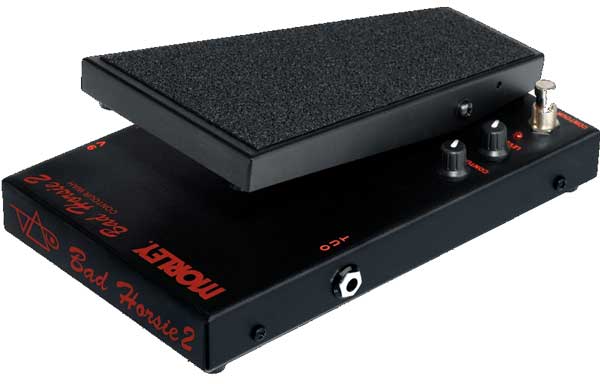 Check out the current price and full details of the Bad Horsie 2 Wah here.

Getting the most out of the Bad Horsie 2 Wah

Here are some tips to help you get the most out of the Bad Horsie 2 wah:

Alternatives to the Bad Horsie 2 Wah

If you like the idea of a switchless wah pedal but want something with a different tone or features, there are a few alternatives to check out:

Alternatively, check out this guide on the best wah pedals to find the right wah for your needs.