One of the advantages multi-effect pedals have over a pedalboard of single-effect pedals is the control over switching. With one stomp on a footswitch, you can enable and disable multiple effects at once. 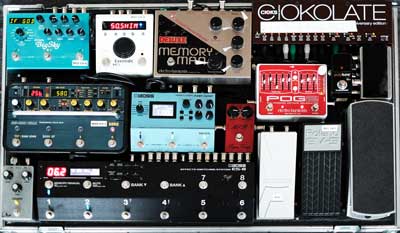 Imagine changing between these two sounds on a typical pedalboard:

To change from one tone to the other you would need to step on all five pedals. Even if you’re a fast tap-dancer, you’re not going to be able to instantly change between the two tones.

If you have a large pedalboard and feel like you’re tap-dancing on your pedals, this is where an effects switching system like the BOSS ES-8 can help you.

If you’re wondering how this compares to a MIDI foot controller, check out this guide on MIDI Foot Controllers for Guitar.

What is the BOSS ES-8 Effects Switching System

The idea behind the BOSS ES-8 is simple: plug all your effects pedals into the ES-8, then you can route the effects any way you want and save them into different banks.

The below photo shows how flexible this device is:

In addition to plugging in up to 8 pedals to individually control, you’re also able to use expression pedals and external foot controllers. MIDI I/O allows you to control your MIDI pedals and save important details such as tempo to each patch. For example, if your delay pedal is MIDI compatible you can assign different tempos for different songs.

Getting the most out of the BOSS ES-8

BOSS ES-8 Manual – if you’re interested in how flexible the ES-8 is, check out the manual. It shows how to set up effects patches, how to connect your pedals, and other advanced features.

Here are some other tips to get the most out of the ES-8:

Check out the price and full details of the BOSS ES-8 here.

Alternatives to the BOSS ES-8

There are a few effects switching alternatives to the ES-8 worth checking out.

If you like the features of the ES-8 but feel you don’t need that many patches or inputs, the BOSS ES-5 might be a better option.

It’s almost half the price of the ES-8 while still providing all the important features. Connecting up to five loops should be more than enough for a lot of guitarists.

If you want something a bit easier to set up that doesn’t use a little screen and menu buttons, the Octa-Switch MK3 is worth checking out. It’s not as flexible as the BOSS switchers, but for many guitarists, it gives you enough control to make your life easier. The MK3 is basically the same system as the MK2, but in a more compact design.

What I like about this design is how you set up the presets. Above each footswitch is a row of 8 dip switches. These switches represent each of the eight pedals you plug into the unit. You can set up any combination of pedals for each preset by adjusting the dip switches. The LEDs at the top also give you a quick idea which pedals are active at any time.

If you do get one of the above switching systems or a different one not mentioned above, let me know your thoughts on it here and any tips you have for other guitarists to get the most out of it.