If you’re not familiar with compressors and why they’re useful, check out my Ultimate Guide to Guitar Compressor Pedals. 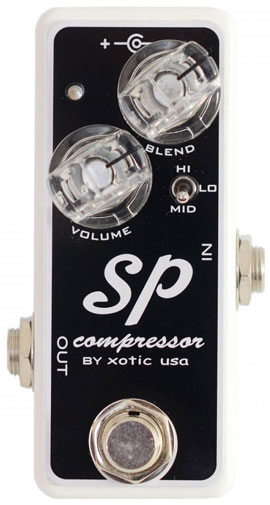 Check out the full feature list and price of the Xotic SP Compressor here (link to Amazon).

It’s great to see this pedal in such a tiny casing. If you’re like me you probably don’t like the idea of a tuner or a compressor taking up precious pedalboard space. You probably much rather have the extra room for a nice delay or overdrive pedal. So it’s great that this tiny pedal doesn’t take up much space. If you have a full pedalboard, this is a great benefit.

The two main controls on the SP Compressor control the volume and ‘blend’. The volume knob provides up to +15dB of boost. The blend knob allows you to mix between a completely dry signal and a completely compressed signal. The blend knob is an important feature as it gives you complete control over the overall compression level and how dramatically (or subtly) it is used.

A small three-way toggle switch on the face of the pedal as shown below controls the sustain/compression. Some other pedals use a knob to control this but a three-way toggle switch works fine. The chances are you will likely find one setting that you like the sound of and never touch the switch again. So having this as a switch rather than a knob makes the pedal easier to use and quicker to set up. 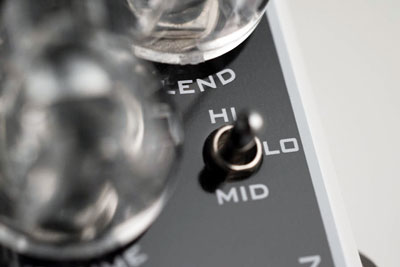 For a pedal this small, it’s good to see it gives you the option of a 9V battery. There are other mini pedals that don’t even give you that option. Alternatively, you can connect an external power supply.

As explained later, there are four internal dipswitches that give you greater control over the compression. Those switches control the attack, release, high cut filter and a pad. I’ll explain these later as they’re important to set the pedal perfectly to your other gear.

This is an important feature for a pedal like a compressor. If you’re not sure what True Bypass means, check out my guide on True Bypass and Buffers here.

Having only two knobs does give the SP a very simplistic feel. You can simply set the volume to a level that suits you then adjust the blend knob to find the level of compression you’re after. But it can get a bit complicated when you start to factor in the Sustain/Comp switch and the internal four throw dipswitch.

When you unscrew the bottom plate to access the battery, you will see a dipswitch as shown below: 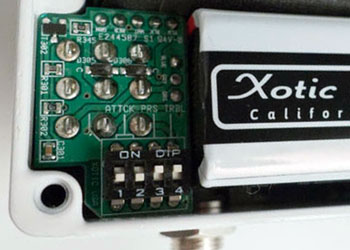 Four options allow you to control different aspects of the compressor. The four options are:

I typically despise internal dipswitches because any time you want to change a setting you need to physically open the pedal up to make adjustments. But I get the feeling the goal of the SP Compressor is to make it simple to use and to do that Xotic are focusing on less knobs and controls on the actual face of the pedal. The truth is that once you find the right dipswitch settings, you probably won’t need to touch it again.

The SP Compressor’s manual gives a few examples of different settings as shown below: 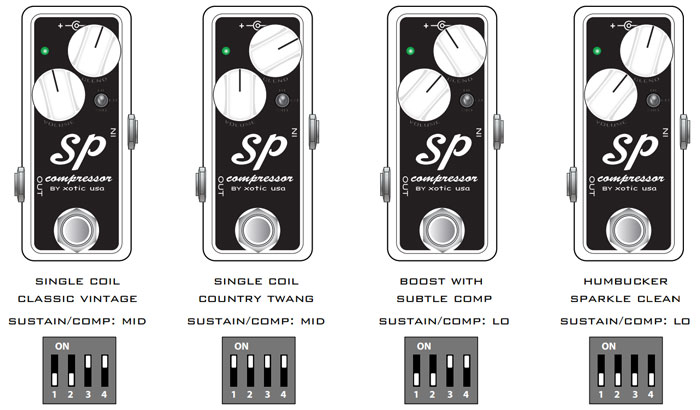 Notice how the two tone knobs are only slightly adjusted between the different examples? That means that most of the changes in what you hear depend on the dipswitch settings. So once you find a setting you love, you can leave the dipswitches and fine tune the compression using the two knobs and the toggle switch on the face of the pedal.

I went through the four examples above and while each one was interesting, I immediately knew which setting was right for me. You will probably have the same experience so if you do buy the Xotic SP Compressor, I recommend going through the above examples as a way to figure out what dipswitch settings are right for you.

A word you will hear over and over these days is ‘transparency’. People are always raving about transparent overdrives, boosters and compressors. I’m sure you’re sick of hearing about transparent pedals by now (as am I) so I’ll just briefly mention that a compressor should be transparent and the SP thankfully is. It also uses True Bypass so you know when you bypass it your tone won’t be affected.

It can be hard to describe quality when it comes to compressors so have a listen to the below example to get an idea on how the SP will impact your tone:

The above example sets the compression toggle to MID with 70% blend which results in quite a compressed tone that suits that style of playing. Generally compressors sound best when used more subtly so I if you feel the end result had too much compression, you can easily dial the blend back or simply switch the toggle to low. When I played around with the toggle I tended to avoid using the high setting on the toggle switch. A lower compression with a higher blend gave a better result most of the time.

Overall I was pleasantly surprised with the quality of the SP Compressor. I’ve used compressors in the past and never really felt they were worth space on my pedalboard. They never really felt like they added something worthwhile to my tone. The SP is the first compressor I’ve used that I felt like it does add something important to my tone. I experimented with using it as a booster, to give my clean tone some extra clarity and even used it with different effects to see how it could add something new to the effect. Almost every time it felt like the SP enhanced the other effects without changing the tone dramatically.

In terms of sound quality, the SP gets top marks in my opinion. I haven’t yet compared the SP to the Wampler, Keeley or Diamond compressors, but compared to compressors I’ve used in the past the quality here is top notch.

The great thing about mini pedals is that they’re going to be strong by default. The small casing means there’s less area to stand on so less potential for damage. It’s quite a heavy pedal for it’s small size and you can see from the internal photo earlier that everything is snug. I don’t see this as having any trouble gigging and even the large knobs should be fine as you’re unlikely to be stomping on this often unlike an overdrive or delay pedal.

The SP has been around for a while so I searched online to try and find any problems other people have had with them and I struggled to find anything. So it has so far stood the test of time in terms of reliability and quality.

The Xotic SP Compressor exceeded my expectations although I do have to say I did have low expectations after using other less impressive compressors. After playing around with the SP I realized the potential of having a high quality compressor in your signal chain and what it can do for your tone. Sometimes I use the SP in an always on state to enhance my overall tone. Other times (depending on what I’m playing) I leave it off and only turn it on when I want to give a boost or clarity to a certain type of sound. For example sometimes I use it on a clean tone when I want to give some extra clarity without changing the tone the way an overdrive or booster pedal would.

I’m really impressed with the Xotic SP Compressor and highly recommend it. Of course check the advice below to check if it does suit your situation or not.

Check out the price and more details on the Xotic SP Compressor here (link to Amazon).

Guitarists with a lot of effects: compressors are generally a good idea when you use a lot of effects. By compressing your signal it clears up your tone and generally ends up with better results. If you often have three or more pedals active at once, then a compressor is really going to give you some clarity you may be losing right now.

Anybody looking for a very clean booster: while this is a compressor, it works exceptionally well as a transparent booster. I love using this on a clean tone as it keeps the tone intact and doesn’t add any grit. I use the SP as a way to achieve a very clean tone and I use an EHX Soul Food whenever I want to add a bit of grit and extra warmth to my clean tone. Having a way to get a very clean boost is useful not just for clean tones though – boosting your signal to your amp or other pedals will almost always give you a better end result.

Live guitarists: a compressor is really useful for live situations to add some consistency to your level. An uncompressed clean tone can be a pain to deal with in a live situation due to the volume spikes. A compressor will even out your level and help you cut through the mix without any loud volume spikes. Definitely recommended if you often use a clean tone while playing live.

Guitarists who always use distortion: if you play in a band that never uses any clean tones and you tend to stick to a high gain distortion (eg: you’re in a metal band), then a compressor probably won’t give much benefit. While it might add to your tone, you’re not going to get as much out of it compared to a guitarist who switches back and forth between clean and distorted tones.

How to get the most out of the Xotic SP Compressor

Use it as an effect rather than always on – the typical use of a compressor is to leave it on all the time to give your tone more consistency. While you can definitely use the SP Compressor this way, it’s also a good idea to experiment with using it as an effect that you would turn on and off like any other effect pedal. You can use it to fatten up your rhythm tone or give your lead tone a boost. By playing around with using the SP as an effect rather than always having it on, you will learn when it should be used to enhance your tone and when it’s best to leave it off.

Alternatives to the Xotic SP Compressor

There are plenty of compressors on the market so I’ll limit myself to mentioning a few compressors that are incredibly popular:

Check out my guide on Guitar Compressor Pedals to read more about alternative compressors and why you may prefer one over another.