TC Electronic have a highly praised range of delay pedals that can make it difficult to figure out which one is right for you. If you have heard one of the Flashback pedals in action and thought you would like to get one for yourself, this guide will help you find the one that matches your needs.

Of course, there are plenty of alternatives when it comes to delay pedals as well as other options from TC Electronics. This guide is only for people who want to find out which Flashback pedal will suit their needs. If you know you want a delay pedal and want to consider other brands or options as well, check out my guide on Buying a Delay Pedal.

This guide will run through each delay pedal starting from the simplest and working towards the more complicated. I’ll give you a quick rundown of the features and why this pedal may or may not suit your needs. By the end of the guide, you should have a good feel for which pedal would suit you the best. 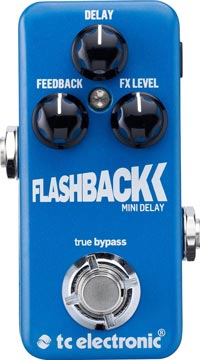 TC Electronic’s smallest and simplest delay pedal is the Flashback Mini. At first, it looks like any other simple delay pedal with a typical three-knob layout. What makes the Flashback Mini stand out over most other small delay pedals is the TonePrint feature. With TonePrint, you’re able to choose between a great number of different delay types and upload one to the Mini.

Who would the Flashback Mini suit?

If you’re looking for a very simple and compact delay pedal, it doesn’t get much simpler or smaller than the Flashback Delay. It’s the smallest pedal in TC Electronic’s range but still contains enough features to be worth considering.

If you feel that you’re only going to use delay on occasion and won’t need to regularly switch back and forth between different types of delays, then the Flashback Mini would suit your needs.

Who wouldn’t the Flashback Mini suit?

If you like the idea of experimenting with different types of delays and switching between them as you need, then the Mini isn’t going to offer you flexibility like the other pedals will. For example, if you play live and you need different types of delay settings for different songs, then the Mini won’t suit you. Even jumping up to the next pedal in the range can give you a nice jump in flexibility and control.

Check out the price and full details of the Flashback Mini here. 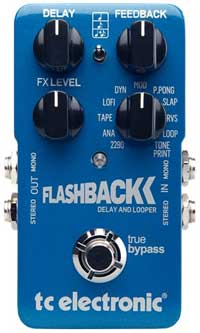 The next step up from the Flashback Mini is the Flashback. The Flashback Delay is possibly the most popular delay pedal in TC Electronic’s range due to its flexibility and size. It’s not as massive as some of the larger delay pedals yet still offers plenty of features and the ability to quickly switch back and forth between different delay effects and types.

Who would the Flashback Delay suit?

If you looked at the Flashback Mini and felt you needed just a bit more features and flexibility, then the Flashback probably fits your needs. It suits guitarists who might need to change between different types of delays on occasion.

Who wouldn’t the Flashback Delay suit?

The Flashback Delay is a good mid-range pedal (from this range) that offers a good set of features without taking up too much pedalboard space. If after reading about the larger pedals below you feel you don’t need the extra features, then the Flashback would be a good choice.

Check out the price and details of the Flashback 2 here. 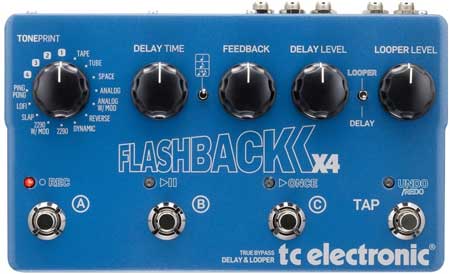 One look at the Flashback X4 and it will be obvious that it’s quite a step up from the above pedals. It’s a step up in features as well as flexibility and ease of use. Having four footswitches instead of one makes all the difference when playing live or using the looper function.

Who would the Flashback X4 Delay suit?

If you perform live and use a variety of different delays throughout your set, then the X4 would be more appropriate to your needs than the above pedals. Being able to instantly switch between different delay presets, using a looper or simply using the tap tempo feature using your feet makes the X4 very suitable for live performances.

If you don’t already have a looper pedal and can’t imagine yourself buying a standalone looper, then the X4 is a great way to get a looper and a delay pedal at the same time. While the Flashback does have a loop feature, it’s nowhere as practical as it is in the X4.

A lot of guitarists bought the X4 as an upgrade from the Line 6 DL4 as it has a similar set of features at a higher sound quality. So if you have a DL4 or another older delay pedal and are considering an upgrade, then the X4 is worth considering.

If you already have a looper pedal and your needs for delay are fairly straightforward, the X4 is overkill. The looper and the extra flexibility from the four footswitches are really what sets the X4 apart from the Flashback. So if you aren’t really interested in the looper or are happy to manually change between different delays using your hands, then the Flashback or the Flashback Mini would better suit your needs.

The Flashback X4 is the most feature-filled pedal in this range so if you’re looking for one that you’re not going to outgrow, then the X4 might be the one to go for. For many guitarists who have basic delay needs this is overkill, but if you like experimenting with delay and feel you will use it a lot in the future, having a full set of features now is better than seeking upgrades later on.

Check out the price and reviews of the Flashback X4 here. 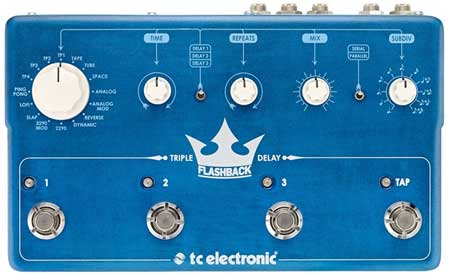 If you like the features in the X4, it’s worth comparing it to the Flashback Triple Delay. The Triple Delay allows you to play up to three different delays at the same time. You can store the delay presets independently and turn them on and off as you wish while keeping them all in sync using the tap tempo footswitch. So unlike all of the above pedals which offer you one delay at a time, the Triple Delay’s main benefit is that you can layer delays on top of each other.

Who would the Flashback Triple Delay suit?

This depends on your style of playing. If you like the idea of building up lush ambient layers of delay and experimenting with combining different delay effects and sounds, then the Triple Delay gives you the best flexibility. While you can definitely create lush and layered sounding presets on the other pedals, the Triple Delay does take it much further.

If you don’t think you’re really going to be layering multiple delay types at the same time, then there’s little reason to choose the Triple Delay over the X4. The Triple Delay doesn’t have a looper function unlike the X4 so if that’s important to you, you would need a separate pedal.

Compared to the other pedals in the Flashback lineup, the Triple Delay does stand out in that it offers a different way to experiment and come up with unique sounding delay effects. If you play in a style that would benefit from multiple delays running at the same time, then rather than buying multiple delay pedals, the Triple Delay is worth considering. Being able to sync the delays easily and access a wide range of options does make this a fantastic creativity tool.

Check out the price and reviews of the Flashback Triple Delay here.

This brief comparison of the different Flashback pedals should have given you a feeling for which one best suits your needs. It’s tempting to dig deeper and compare specs across the pedals, but what really matters is what you need from a delay pedal and how you will use it. As all of the above pedals share features such as TonePrint, what you should focus on is the limitations of each pedal.

The Flashback Mini is a great choice for somebody who has very simple delay needs. It’s tiny size and simple controls allow you to basically get the perfect delay sound. Think of it as a set-and-forget delay pedal. If you think you’re going to need to switch between different delay types on occasion, then the Mini won’t suit you.

The Flashback is a great mid-range pedal in terms of features and flexibility. Now you can easily switch between different types of delays without first needing to use TonePrint. For most at-home guitarists and for many live performers the Flashback will suit your needs if you don’t need to switch between delays too often.

The Flashback X4 is the most suitable choice for live performers or any guitarist with complex delay needs. Being able to switch between delays using your feet allows you to get more out of your pedal and use it in ways the smaller pedals won’t be able to. If you’re looking for a future-proof delay pedal, this is as good as it gets.

The Flashback Triple Delay offers you a way to experiment with delay types and build complex rhythms, layers or sounds. If you like the idea of experimenting and creating something unique, then the Triple Delay will probably suit your needs.

The right delay pedal for you depends completely on what you want from a delay pedal. So take your time reading the above guide, watch the videos and check out other people’s reviews on Amazon. You’ll quickly get a feeling for which pedal will probably suit you best. When that happens, trust your gut feeling.

Found this guide useful? Please share it on social media to help support this site (if you use Pinterest, please pin the below photo).