If you’re learning guitar, you will have seen or heard mentions of guitar riffs and guitar licks. Guitar riffs are a big part of many styles of music, so let’s look at what they are and how you can learn them.

In this short guide, let’s look at some common questions you might have about guitar riffs and how to get started learning them.

Let’s start with what a guitar riff is.

A guitar riff is a short repeatable idea used in a song. A guitar riff can be repeated over and over to form the main hook of a song, or it could be played only once in a song.

A guitar riff can be made out of chords or individual notes. It can be played on the lower strings of a guitar as a rhythm part, or higher up on the guitar as a lead guitar part.

Guitar riffs are a big part of rock music and many rock songs are written completely around a single guitar riff.

After you read this guide, learn 14 Must-Know Guitar Riffs here.

What is the Most Famous Guitar Riff?

The most famous guitar riff is the main riff to Smoke on the Water by Deep Purple. The riff is the first thing you hear in the song and is one of the first rock riffs most guitarists learn.

Here is the Guitar TAB for the guitar riff in Smoke on the Water:

What makes this an interesting riff is how simple it is. The punchy overdrive tone and the stop-start sound all help make it the most iconic guitar riff.

There are plenty of other guitar riffs that may be just as famous as Smoke on the Water.

Here are some of the greatest guitar riffs of all time you might want to learn:

Find out how to learn 14 Must-Know Guitar Riffs in this guide to learn Smoke on the Water as well as more famous guitar riffs.

What is the Difference Between a Guitar Lick and a Riff?

The main difference between a guitar lick and a guitar riff is how a melody or idea is used. If the idea is a key part of the song, it’s a guitar riff. If it’s a once-off idea that is part of a solo, it’s a lick.

Note: keep in mind that many guitarists use the terms guitar riff and guitar lick interchangeably. So if somebody disagrees with what I’ve written here or you see different definitions elsewhere, that’s fine. You can call them whatever you like.

What Makes a Good Guitar Riff?

If you want to try and write your own guitar riffs, you may wonder what makes a guitar riff good.

While it’s possible to write good guitar riffs that aren’t simple, the more complicated you make a riff, the less memorable it becomes.

That’s why some of the best guitar riffs are also the easiest to play on guitar.

What is the Forbidden Guitar Riff?

If you haven’t heard somebody mention the forbidden guitar riff yet, it’s a real thing.

The forbidden guitar riff is the opening guitar part to Stairway to Heaven by Led Zeppelin. It’s a running joke among guitarists that it is forbidden to play this riff (or other popular riffs) in guitar stores.

Stairway to Heaven was for a long time, one of the most popular songs to play on guitar.

The intro sounds great to play on guitar and isn’t too hard to learn. This meant everybody knew how to play it (some good, others bad).

When a guitarist would go to a guitar store and try out a guitar, there was a high chance they would play this song.

Hearing the same riff played over and over drove many store clerks mad to the point where people would be discouraged or mocked for playing it. 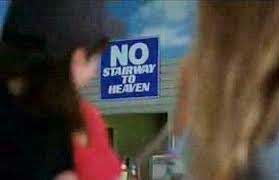 While there are a lot of hugely popular guitar riffs that are overplayed in guitar stores, Stairway to Heaven stood out because beginners would often play it badly.

The 1992 movie Wayne’s World had a joke about this you can see below:

If you’re wondering why what he played on the guitar doesn’t sound like Stairway to Heaven, apparently the film had to change the riff you hear due to a licensing dispute.

If you played the intro to Stairway to Heaven in a guitar store today, you might get a few smirks from guitarists who know about the running joke.

Other ‘forbidden’ riffs from over the years have included Smoke on the Water, Smells Like Teen Spirit, Sweet Child O’ Mine, and Seven Nation Army. Basically, any hugely popular song that gets over-played at guitar stores can be considered a ‘forbidden’ riff.

How Do You Write Guitar Riffs?

Before you start trying to write your own guitar riffs, I recommend learning a lot of guitar riffs by other guitarists.

Spend time analyzing the guitar riffs you like to play. Think about what you like about them and try to write similar-sounding riffs.

Writing riffs is a skill that anybody can learn. All it takes is practice.

What Makes a Guitar Riff Heavy?

Some guitar riffs sound heavy and move you in ways other songs don’t.

A heavy guitar riff is the result of a strong rhythm or groove combined with a great guitar tone. Riffs that focus on a strong rhythm and combine it with the right chords or notes end up with a heavy feeling.

A common misconception about heavy guitar riffs is that you need to lower the tuning of your guitar to play them.

There are countless heavy guitar riffs in standard tuning and there are riffs you can play on an 8 string guitar that won’t sound heavy at all.

If you want to write heavy guitar riffs, focus on writing riffs that focus on a strong rhythm or groove.

How Do You Riff on Guitar?

A guitar riff is a short rhythmic or melodic idea used in songs. To riff on guitar means to jam or make up ideas on the spot.

Riffing is when you play around with an idea and brainstorm different ideas. It’s a common term used by writers as they work on their craft.

Guitarists prefer to use the term ‘jam’. Instead of saying “let’s riff on this” like a group of writers might say, a guitarist is more likely to say “let’s jam”.

You riff on guitar by experimenting with different scales, riffs, and licks. Putting on a backing track and playing over it is an easy way to get started with jamming.

How to Learn Guitar Riffs

The good news is that countless guitar riffs are easy to learn. Even as a beginner, you can start learning some of the most popular guitar riffs right now.

First, check out this guide on 14 great guitar riffs that are easy to play.

Pick out a riff you are interested in learning.

Now spend at least 10 minutes every day working on learning that riff. Practice it over and over every day.

Eventually, you’ll memorize the notes and won’t have to look at the Guitar TAB.

If you continue to practice it, you will notice that it will gradually start sounding better. Your timing will improve and you won’t make as many mistakes.

Once you feel you have mastered the riff, pick another riff from the list to work on.

Learning riffs on guitar is easy and all you need to do is keep practicing them. Even if a riff feels impossible to play, work on it every day and you’ll eventually find it easy.