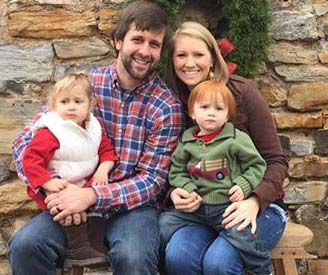 How long have you been playing guitar and what styles do you enjoy playing?

I remember starting guitar before my 10th birthday and I’m 29 now, so I’ve put in a solid two decades. As far as stylistic preferences, I’ve always been a modern rock guy (or what was modern rock growing up). Smashing Pumpkins, Tool, Alter Bridge, Korn and a lot of the late ‘90s early 2000s rock and nu-metal is what I grew up on.

Lately I’ve been into a lot of folksy, acoustic stuff and, oddly enough, ‘90s rap.

As far as particular guitar players, Monty Montgomery, Phil Wickham, Edge (David Evans), Adam Jones, Steve Vai and Billy Howerdel have all had a tremendous impact on my playing style.

What does your current electric guitar rig look like?

My primary guitar is a 2005 PRS CE-24, which I bought used from a Guitar Center in Chicago – black with gold hardware. I love that thing. My second is a 2006 PRS Santana SE which I bought new in 2006, and have since added Seymour Duncan pickups and baritone strings. I use that to play heavier stuff in lower tunings. You can see it in action on this Korn Cover. It’s basically a seven-string without the high E.

I have a lot of different pedals but primarily just use a Steve Vai Bad Horsie wah that I’ve owned since I was 15 (that thing just won’t quit) and a Line 6 DL4 delay modeller. I love the delay sound and use it a lot. Pigtronix recently lent me their new Echolution 2 Ultro Pro for a review, which is an absolutely amazing delay pedal. That’s one that I’ve been spending a lot of time with recently.

For most of my life I’ve used Fender tube amps, but in recent years have been running a Line 6 Spider IV modelling amp, which helps me cut down on the pedals I need to haul around. It’s not the best, but it works for right now.

What aspects of your current rig do you enjoy the most with your tone?

I’ve also found that the PRS guitars play really nicely into that tone as well. They just have this punchy quality about them that you can’t get out of other guitars. It all combines really nicely.

If you had to start your rig again from scratch, how would you approach getting a good clean sound?

There are a couple things that I would change. First, I’d probably spring for a delay pedal that has true bypass and analog circuitry (the Echolution 2 has spoiled me). When playing through a clean signal, I think there’s definitely a difference and a quality hit when you’re using the digital stuff.

Second, I’d go back to a tube amp (maybe a Fender Vibrolux), simply because they tend to have a much smoother and responsive tonal quality, especially when it comes to that thicker, more bassy sound. I’ll probably do this at some point in the near future either way.

If you had to start your rig again from scratch, how would you approach getting a good drive sound?

All the same EQ philosophy would apply here. I think the base of a great distortion is a great clean tone, so again, I’d go after a tube amp that had a smooth low-end response.

After that, I’ve had a lot of luck with the Boss MD-2 (Mega Distortion) and some of the Line 6 digital distortion models. But, to be honest, I don’t think the distortion source is nearly as important as the amplifier. If I were lucky enough to get my hands on something like a Mesa Boogie, I would just use the onboard dirty channel and avoid a distortion pedal entirely.

If you could only use three effects pedals for the rest of your life, what would those pedals be and why? 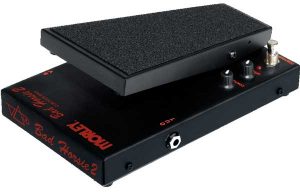 So first and foremost I’d take the Original Bad Horsie wah. Once you go switchless, you never go back. Gotta have that thing. My delay pedal would have to be the Echolution 2 Ultro Pro, although that is a kind of “flavour of the week” for me at this point.

After that it could be 10-way tie, but I’d probably throw in the Wampler Latitude Tremolo. That thing is awesome.

What guitarists inspire you when it comes to tone and what have you learned from those guitarists?

I’ve been a huge Tool fan for a long time, so Adam Jones and Billy Howerdel have been two of the most significant inspirations, especially when it comes to the heavier side of my guitar playing. Jones, in terms of how rhythmic and responsive his playing is, and Howerdel, because of his touch and subtlety.

I pull a lot of my tonal preferences straight from their tracks, particularly Tool’s “The Grudge” and “Blue” by A Perfect Circle.

Others would include Tony Rombola. That dude’s tone is just heavy. Maybe throw Brad Delson in there for the same reason.

For the softer side of my playing, I’d again cite Phil Wickham and perhaps David Crowder, both coming out of the Christian contemporary movement. I think that sector of music has a lot of great electric guitar work, particularly when it comes to their use of delay. Since I’m a Christian and have played a lot of “church music” in my day, my use of delay and how I approach the clean tones of the electric guitar are certainly impacted by those guys.

Another guy who I think has great tone that I try to model is Joel Kosche, when he played with Collective Soul. Before him, Ross Childress was the same way. Both those guys got great sound out of their rigs.

What’s the most exotic effects pedal you’ve played that you found useful for your creativity?

Again, I’d have to go back to the Echolution 2. There is so much you can do with that pedal. As someone who already had a love affair with delay, it opened up a whole new world of sounds and creative movement.

I’d throw the Wampler and Strymon tremolo pedals in there as well. It always gets interesting when you can make an effect keep time.

What’s your best tip or trick for guitarists to achieve a great tone?

My first piece of advice is that tone has to be understood contextually. What works for the guy playing ‘60s surfer rock is going to be awful for someone who wants to cover Greenday.

In a lot of situations, great tone is subjective and fluid.

So my best tip would be to understand the context of the music you’re playing in and get familiar with those who are setting the standard. If you familiarize yourself with the real thing, you’ll know when you’re not measuring up.

As far as some general practical advice, I always tell those who want to achieve a “modern” guitar tone to go with a little more bass, less mid and try to keep the treble balanced to avoid too much of a “piercing” sound. Adding a little reverb never hurt either.

From there, don’t be afraid to layer certain aspects of your sound with different effects and come up with conventions for how you use your pedalboard at particular intervals.

For example, when I’m playing brief, staccato high notes during a verse or bridge, I almost always dial in a short, half-second delay and then rock my wah pedal into the middle position, where it sounds like you’ve rolled your tone knob all the way down. This always produces a nice, ethereal sound that I’ve found works really well with those higher notes.

So again, it’s all about coming up with a good base EQ that you like and then establishing your own conventions and contexts.

Bobby is the founder and editor of Guitar Chalk and a staff writer for Guitar Tricks. You can get in touch with him via email and Twitter.