The chances are you’ve seen something steampunk inspired before. There’s something about the mix of Victorian style cogs and copper and futuristic technology that grabs attention to so many people. 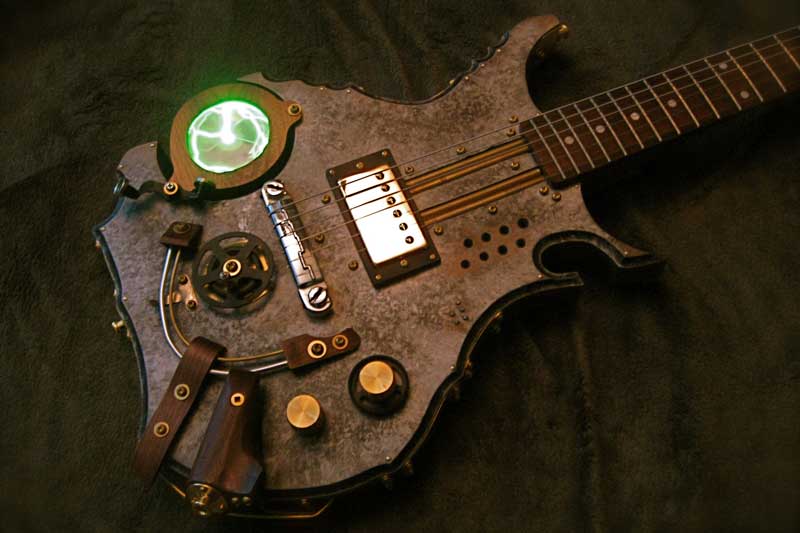 The plasma disc on the above guitar really brings it to a new level. That electric green glow would look stunning live on stage or at night except it would be completely hidden by the guitarist’s arm. 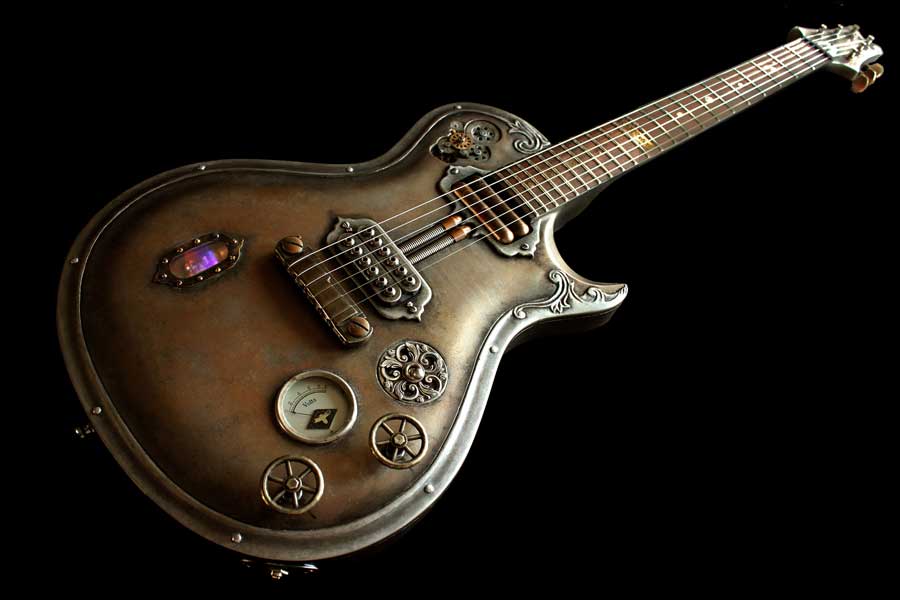 The valve wheels look great as the volume and tone knobs on this one along with the voltage gauge – which would be really impressive if the needle moved as you played! The glowing chamber is a nice touch except it’s again in the worst possible position. The finishing and edging on the body has been skillfully done to give it a really professional look. 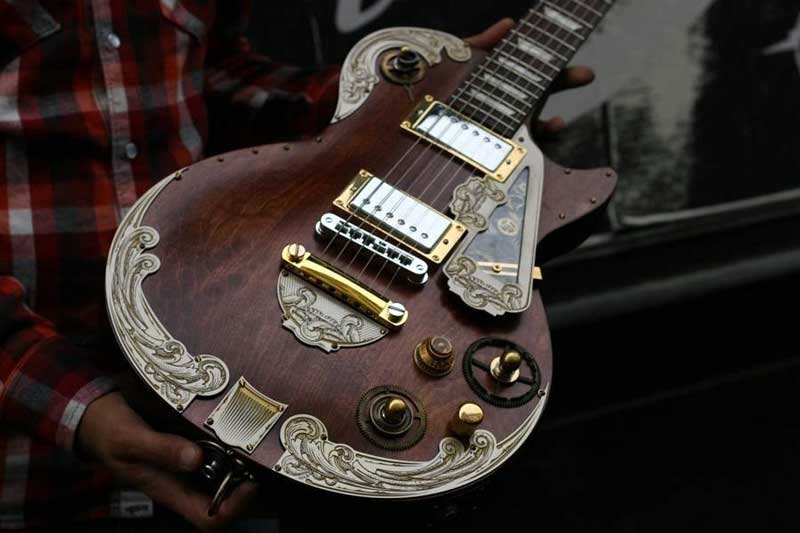 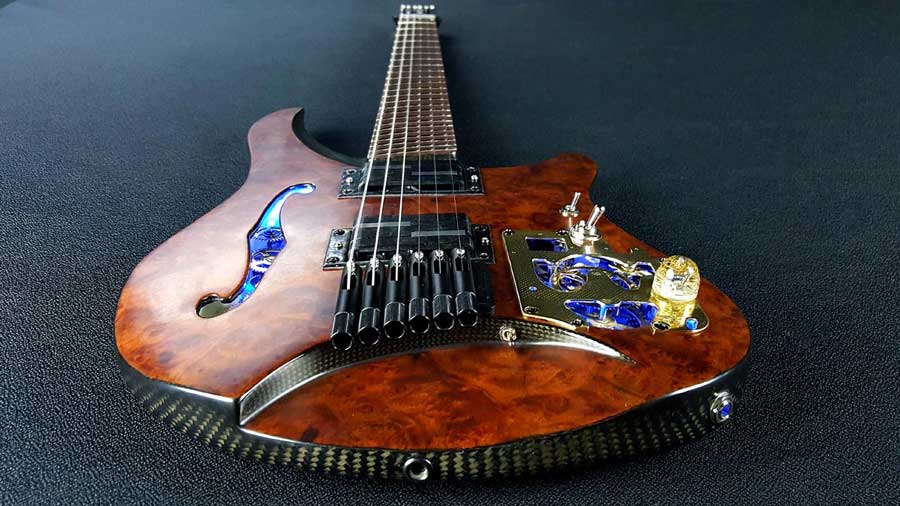 The Daedalus by Emerald Guitars is easily my personal favorite out of the guitars in this gallery. It’s a stunning design that doesn’t just slap a few gears on a regular guitar. This guitar has been well thought out and really is unique.

You can see the carbon fiber along the edges of the body which immediately gives it a unique look as there aren’t many carbon fiber guitars out there. It might not be obvious from the above photo, but this guitar uses fanned frets and a Strandberg headless tuning system.

The illuminated inside with the gears would again look stunning at night (see photo below). I doubt the gears move but it would be amazing if they did while you played. The combination of LEDs and glow-in-the-dark paint was an excellent idea. Unlike the earlier guitars, these are in good positions so you can tell it was designed by somebody who understands guitar. 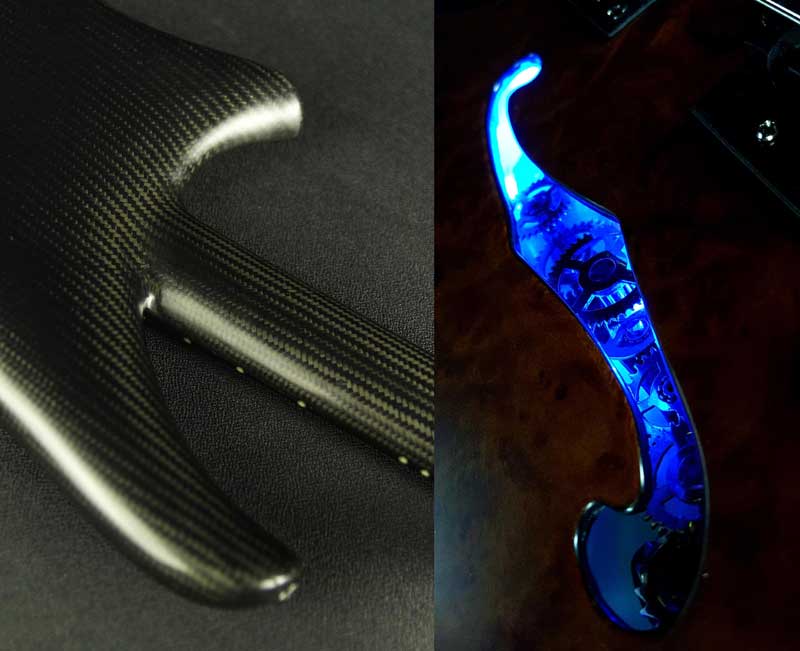 Hats off to the designer of this guitar as it is a masterpiece. 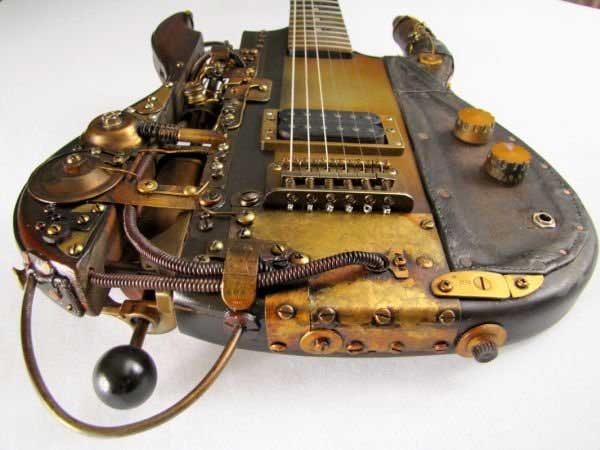 The combination of leader and copper really gets the steampunk look right in this one. I like that the creator decided to split the guitar’s body and extend it with copper pipes and tubing. It’s weird to see a regular shaped guitar transformed like this. 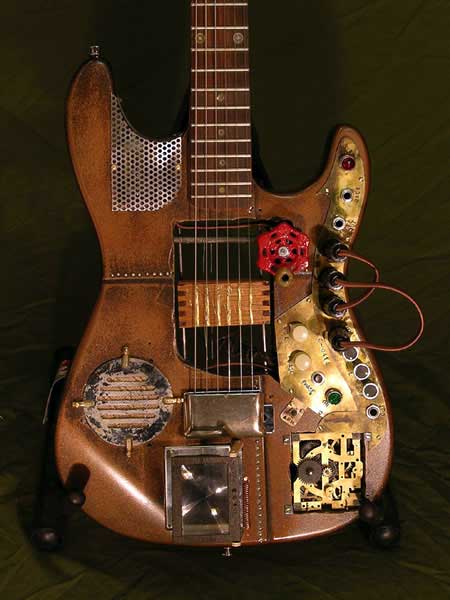 The highlight for me with this guitar is the multiple jacks and wires. It would be a real head-turner if you had to physically change the leads into different jacks to access different wiring or pickup selection. The valve wheel looks like it’s in a horrible position so it might be best hanging on a wall. 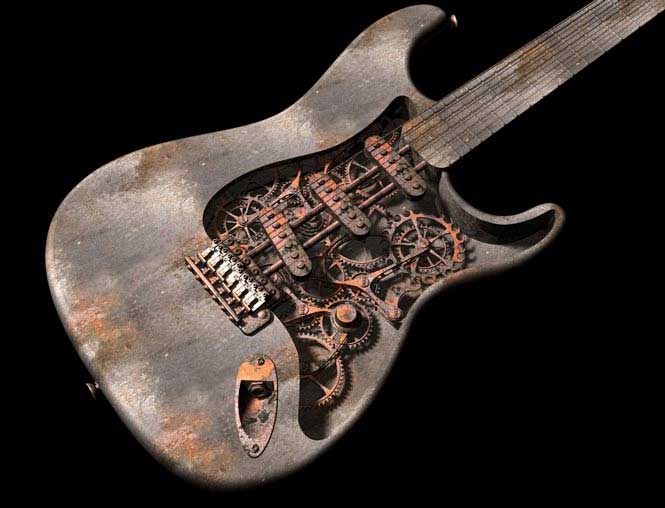 The next time you see a new ‘relic’ guitar, think back to this one. I’ve got a feeling this was created completely in Photoshop, but if it wasn’t, the creator has done a very impressive job at giving the guitar an aged look. I love the idea that instead of having a pickguard you see the mechanical gears inside the guitar. Even if this is only a Photoshop creation, it’s very creative. 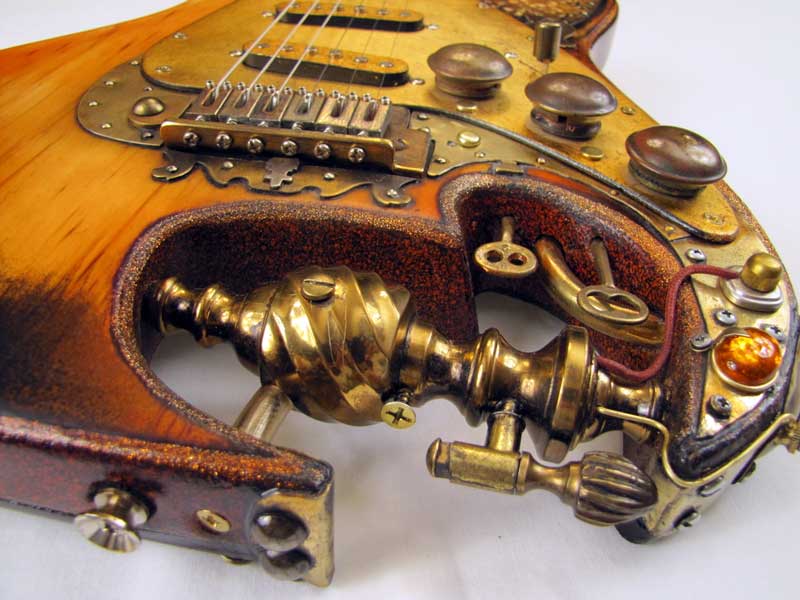 I was impressed seeing the copper parts in the cutout of this guitar. They all look hand-made and fit the steampunk style perfectly. Unlike a lot of other guitars in this list, this one looks nice and comfortable to play. All the modifications are out of the way so again this looks like it was designed by somebody who actually plays guitar. 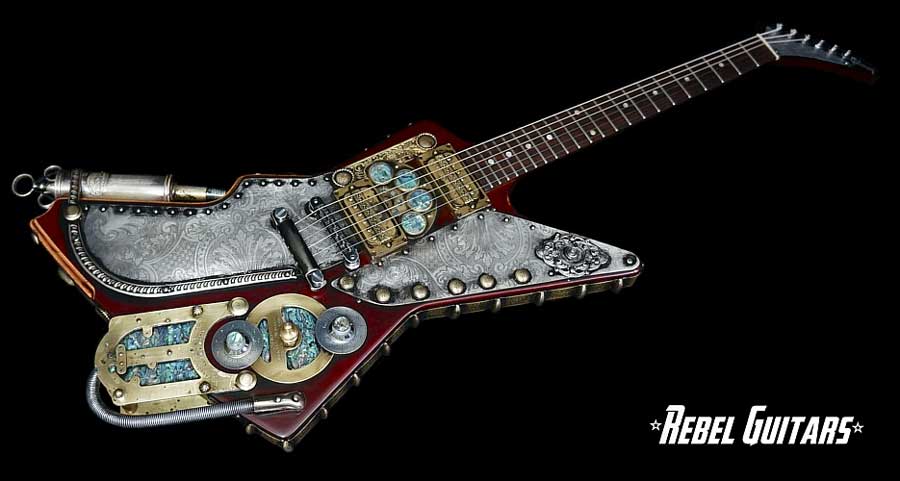 This Gibson Explorer by Franco Design Studio stands out in terms of quality. The combination of different materials – copper, aluminum, leather and Blue Paua Abalone all work really well together to fit this style. The strange syringe looks great – would be impressive if that had a practical purpose such as adjusting the tone. There are a few other steampunk inspired guitars from this designer and all are as impressive as the Explorer. 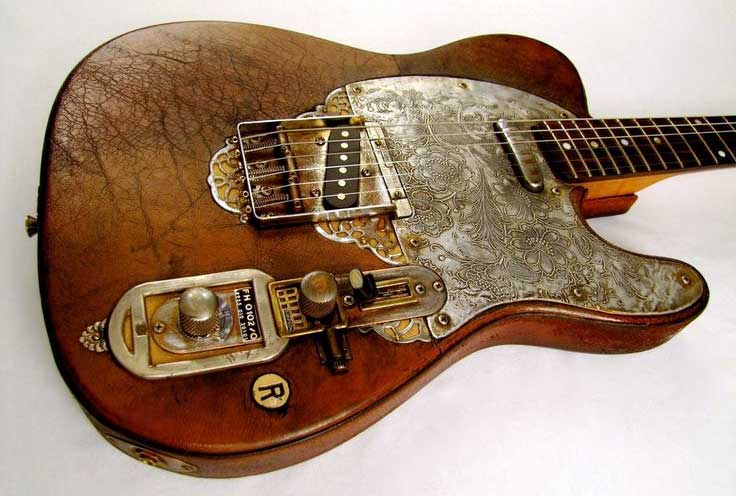 To finish this list off, here’s are more subtle example of a relic done right. The leather and pickguard work well together along with the nicely designed plate for the tone and volume knobs. While some of the above guitars are a bit out-there, this one takes a very familiar look and gives it just a bit of that steampunk vibe.

If you liked seeing these guitars and want to see more galleries or lists in the future, subscribe for email updates here. While I mostly try to write practical guides, lessons and reviews, I’ll mix in a few interesting articles like this one in the future.